A previous Celestis article titled “A Cultural Imperative” underscored how, as humanity reaches further into what Dr. Gerard K. O’Neill called “The High Frontier,” traditions and ceremonies that take place on Earth would be extended into space: “The Celestis concept reaches deeply into the human experience – the earliest fictional literature postulating the possibility of humans leaving Earth included discussions of off-planet funeral rituals and services. It is only natural that as we move throughout the solar system, we will take all of our celebrations and memorials with us – adapting and extending them to the unique circumstances of spaceflight and off-Earth existence.”

It’s only logical (in Mr. Spock’s parlance) that “space funerals” would take place off the planet. It’s not strange to think that one day, citizens on Mars or in space settlements might want a burial mission sent to Earth – a place they may have never visited.

In pop culture, several movies and television shows have imagined what space burials would look like in the future, in alternate timelines – and satirically. In this two-part article, we revisit space funerals on the big and small screens to accentuate that the concept is part of our “cultural imperative” and discuss appearances by Celestis in the media that have given visibility to the idea.

During the “Golden Age of Science Fiction,” the concept of memorial spaceflights was broached in a pulp sci-fi volume with the hilarious moniker Spicy-Adventure Stories as early as February 1941. A story by Lew Merrill titled “Space Burial” boasted a cover featuring a muscular man wielding a gun and a scantily clad space babe making what looks like a perilous escape atop an enormous space bird. Its blurb reads: “It was a challenge Bill couldn’t ignore. His mortal enemy had dared him to combat in that space more than five astronomical units from earth. Though he knew his weapons were far inferior, he knew, too, that Sparling had in his power the girl Bill loved.” The story is available to read on the Internet Archive; while its narrative (and visuals) might bear little to no resemblance to the Celestis Memorial Spaceflights concept of today, it does illuminate that a precedent was set for the idea as early as the 1940s. 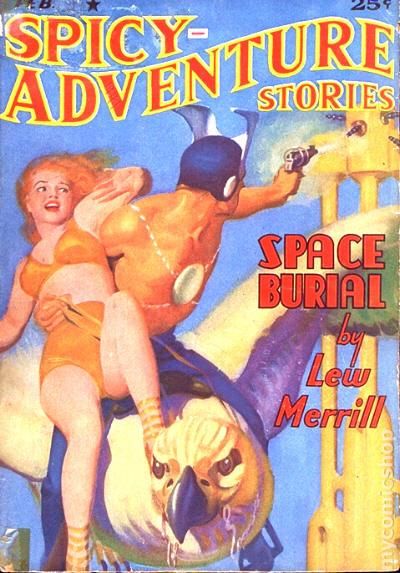 The cover of February 1941's Spicy-Adventure Stories. Image retrieved from the Internet Archive

Fast-forward over forty years to 1982, and the Star Trek® franchise that Gene Roddenberry had created in 1966 was at the apex of its popularity with its second feature film, Star Trek II: The Wrath of Khan. At the film’s conclusion, after the villain, Khan, is mortally wounded, the crew of the starship Enterprise – helmed by Captain James T. Kirk (played by William Shatner) – struggle to find a way to escape a nebula, as the ship’s warp drive has been rendered inoperative. This scenario paved the way for one of the most emotional, moving scenes in Star Trek® history and one of the first space burials depicted in pop culture.

The Enterprise’s engine room is flooded with radiation, but Spock (played by Leonard Nimoy) decides to sacrifice himself to save the rest of the crew. When Dr. McCoy (played by DeForest Kelley) tries to stop him, Spock incapacitates him with a Vulcan nerve pinch. Spock then repairs the warp drive but is exposed to deadly radiation. Before he dies, he tells a grief-stricken Kirk, “You have been, and always shall be, my friend.” The crew of the Enterprise then performs one of the first space burials depicted in cinema, shooting Spock’s photon torpedo casket to the new planet Genesis to the tune of “Amazing Grace” played by Mr. Scott (played by James Doohan) on bagpipes. To quote Dr. McCoy at Spock’s memorial service, “He's not really dead. As long as we remember him.” While the scene devastated many a Star Trek® fan, it also created a precedent and illuminated that space burials would be part of our future traditions.

It's no wonder that Celestis Memorial Spaceflights is part of Star Trek® history. In 1997, series creator Roddenberry was one of 24 brave participants to take part in Celestis’ Founders Flight. In early 2023, Roddenberry, his widow and “First Lady of Star Trek®”Majel Barrett Roddenberry, DeForest Kelley, “Lt. Uhura” Nichelle Nichols, and James Doohan – as well as visual effects maestro Doug Trumbull – will each participate in Celestis’ appropriately-named Enterprise Flight, its first Voyager Service that will establish the first outpost of humanity in deep space.

The Alternate Space History of For All Mankind

One series inspired by Star Trek® is Apple TV’s For All Mankind, which follows an alternate, fictionalized version of NASA throughout generations. During the show’s first and third seasons, it also depicted burials in space, as its crews performed increasingly more ambitious, riskier missions to the Moon and, ultimately, Mars. Note: spoilers ahead.

At the end of Season One, NASA is still flying Apollo lunar missions well into 1975. The U.S. – and the Soviets – have established settlements on the Moon. But the increased risk doesn’t come without sacrifice. NASA astronaut Donald K. “Deke” Slayton (who ironically, in real life, supported the idea of memorial spaceflights as early as the 1980s) is mortally injured in a spaceflight accident and dies before he and Ellen Waverly Wilson (played by Jodi Balfour) can land on the Moon. In one of the series’ most moving scenes, Wilson and veteran astronaut Ed Baldwin bury their boss Slayton on the Moon, making his resting site a place of honor and reflection with various Moon rocks and his name in the lunar soil, where it will go untouched for millions of years. 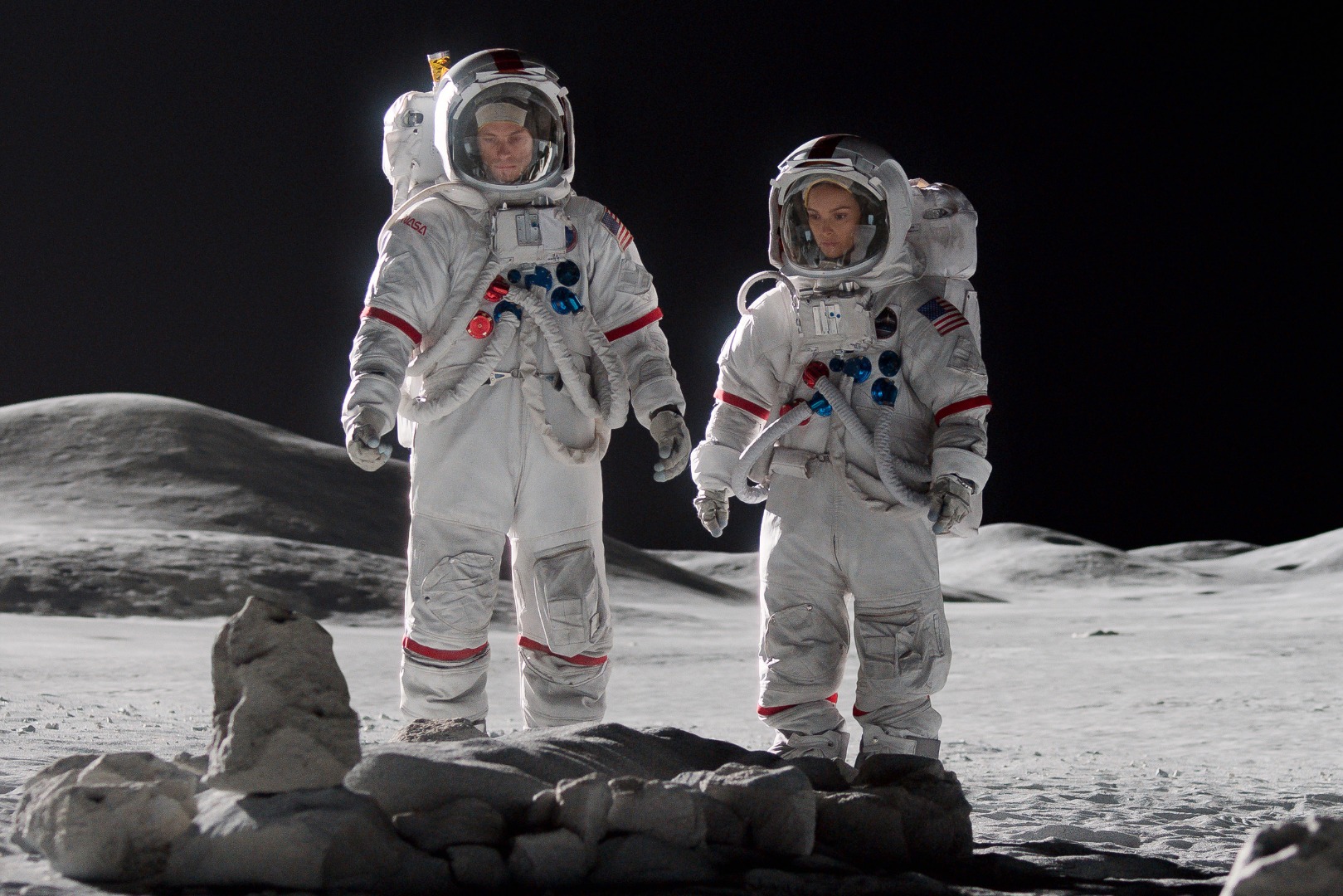 Astronauts Ed Baldwin and Ellen Waverly Wilson pay their respects to Deke Slayton's burial site on the Moon on For All Mankind. Image credit: Apple TV

In Season Three, the stakes have grown even higher during the 1990s as NASA, Roscosmos, and a private company called Helios are in a three-way race to reach Mars. However, disaster strikes when a rescue in space involving the Soviet spacecraft goes horribly awry, killing two astronauts and one cosmonaut. The NASA and Soviet spacecraft commanders hold a solemn space funeral in the Sojourner Mars shuttle, with American mission commander Danielle Poole (played by Krys Marshall) quoting Dr. Martin Luther King Jr. (“There is an amazing democracy about death”) before releasing their lost colleagues into the void.

It’s realistic and practical to assume that if humanity had settled on the Moon and Mars in the 20th Century, it would’ve taken its rituals – including burials and memorial services – to space. In addition, the alternate history series Altered Space by author Gerald Brennan has also featured burials in deep space, as its fictionalized missions encountered adversity and risk upon risk (such as a human-helmed flight to fly by Venus).

Stay tuned for Part 2 of this article, which will discuss a satirical film from 1965 that married an Evelyn Waugh classic to a more modern critique of the funeral industry, and other appearances by Celestis Memorial Spaceflights in pop culture throughout the last 30 years.