Occupants of Interplanetary Craft: Why Should DNA and Data Be Sent to Space? 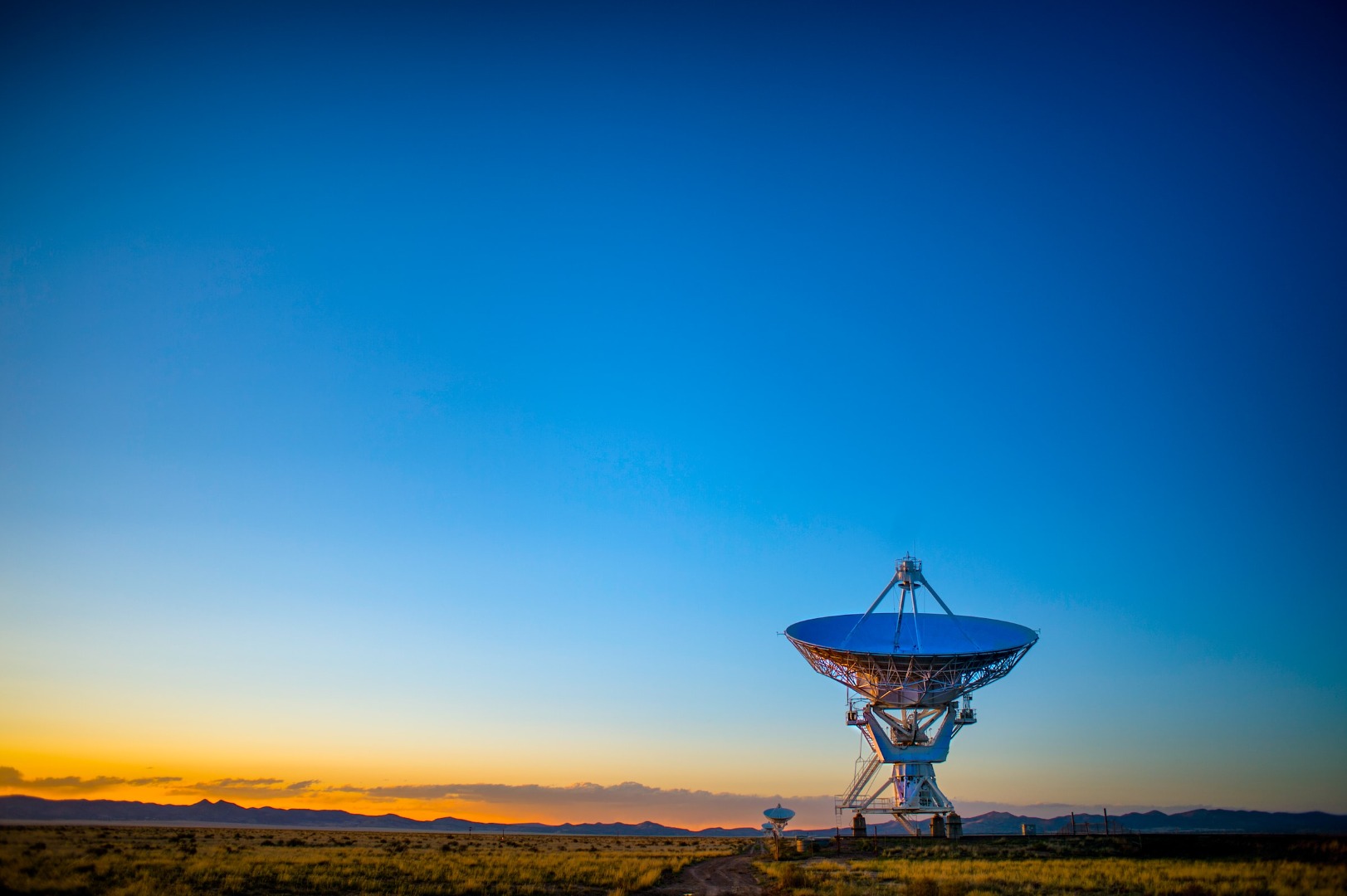 Photo by Donald Giannatti on Unsplash

Celestis Memorial Spaceflights’ upcoming Enterprise Flight will carry more than ashes. Celestis DNA™ and Celestis MindFiles™ will also be part of the flight’s manifest, making an endless journey into the recesses of deep space like none other. But many ask: why should DNA and data be carried into deep space? Should we risk letting other lifeforms into our insular world, or vice versa?

The idea of carrying aerials signaling human life into outer space is not new and has roots far back in humanity. Starting with caveman drawings capturing snapshots of life during the earliest times of recorded human history, people have always wanted to document their lives and times for their descendants throughout the centuries. This article will discuss human communication, how it eventually branched into space (including interstellar space), and how Celestis’ Enterprise Flight will extend the tradition of capturing a “snapshot” of humanity for future generations and even perhaps other lifeforms.

A Brief History of Human Data in Space

Humans documenting their lives on Earth – whether in primitive art, writing, and later, through photography and video – has been a tradition since the earliest times in human history. Each century has presented communication innovations, from papyrus to the printing press to newsprint. By the 20th Century, as the Space Age excited and invigorated the world, the idea of sending communications to deep space either via radio telescopes or spacecraft naturally began to take hold among groups of scientists. The American astronomer Dr. Carl Sagan, who later would host the iconic television program Cosmos, was a pioneer in utilizing spacecraft to send messages to possible extraterrestrial civilizations.

During the early 1970s, the idea to send an “aerial” or signal into deep space – where it might be discovered by extraterrestrial life, or perhaps even humans who managed to settle and survive in deep space in future centuries – found a home in NASA Ames’ Pioneer program. Dr. Carl Sagan presented NASA with the “Pioneer Plaque” idea a mere ten months before the Pioneer 10 spacecraft launched. Sagan enlisted a friend, Dr. Frank Drake of Cornell University (who later devised the Arecibo Message), and his then-wife Linda Salzman Sagan to help develop subtly encoded messages to represent humanity on Earth in a manner that might be understandable to other lifeforms. The gold-anodized Pioneer Plaques were launched on both Pioneers 10 and 11. They depicted the forms of man and woman, the element hydrogen, the Sun, the Solar System, and the basic structure of the Pioneer spacecraft.

According to the Planetary Society, “[The Pioneer] space vehicle was designed to explore the environment of Jupiter, along with asteroids, solar winds, and cosmic rays. Among a succession of firsts achieved by the spacecraft, Pioneer 10 would attain enough velocity to escape the solar system. This tacked on yet another first: the possibility of the interception of a human machine by an extraterrestrial civilization, providing us the opportunity to make contact with life from another world.” The Pioneer 10 and 11 spacecraft more than fulfilled their missions, providing the world with its first higher-resolution views of Solar System gas giants Jupiter and Saturn. Although contact with both spacecraft is long lost, they continue to journey beyond our cosmic neighborhood into the unknown. 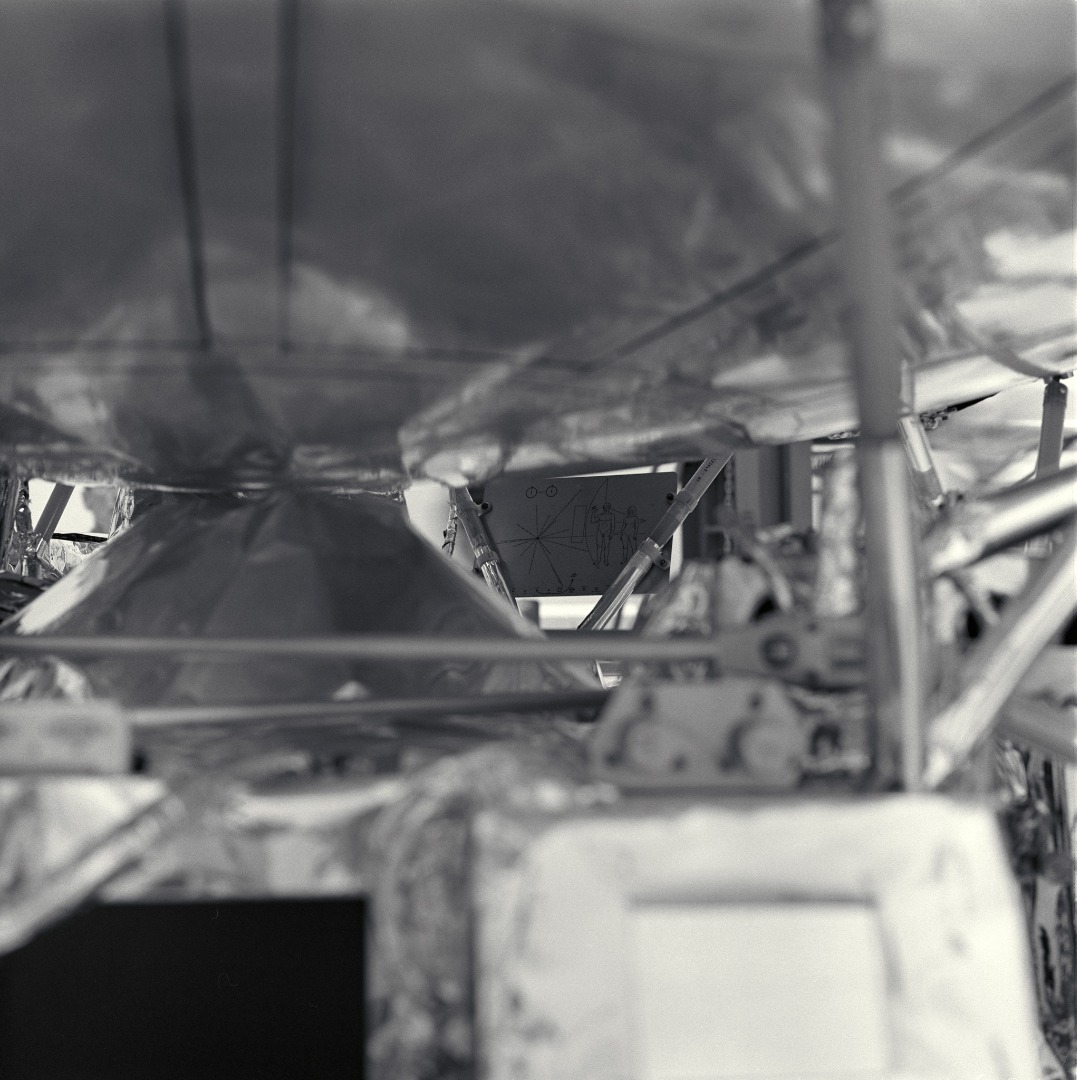 "Pioneers 10 and 11 both carried small metal plaques identifying their time and place of origin for the benefit of any other spacefarers that might find them in the distant future." The plaque can be viewed aft. Photo credit: NASA Ames

The Pioneer Plaque idea received a massive upgrade around the time the two Mariner Jupiter Saturn 1977 spacecraft were built during the 1970s. This program with an unwieldy name would later be renamed Voyager, and its two spacecraft would revolutionize how we viewed the planets and their moons in our Solar System. Again, under the supervision of Sagan, the contents of the “Voyager Golden Records” came together through a NASA committee and contained sounds, popular songs, images and photos, and messages from world leaders representing our planet.

According to NASA, “Dr. Sagan and his associates assembled 115 images and a variety of natural sounds, such as those made by surf, wind and thunder, birds, whales, and other animals. To this they added musical selections from different cultures and eras, and spoken greetings from Earth-people in fifty-five languages, and printed messages from President Carter and U.N. Secretary General Waldheim. Each record is encased in a protective aluminum jacket, together with a cartridge and a needle. Instructions, in symbolic language, explain the origin of the spacecraft and indicate how the record is to be played. The 115 images are encoded in analog form.” While both Voyager spacecraft have long completed their interplanetary “Grand Tour” missions, Voyager 1 is the furthest human-made object from Earth; both spacecraft still carry their Golden Records that may function as a message to other civilizations in the future. (Incredibly, both spacecraft are still operational more than 45 years following their departures from Earth.) 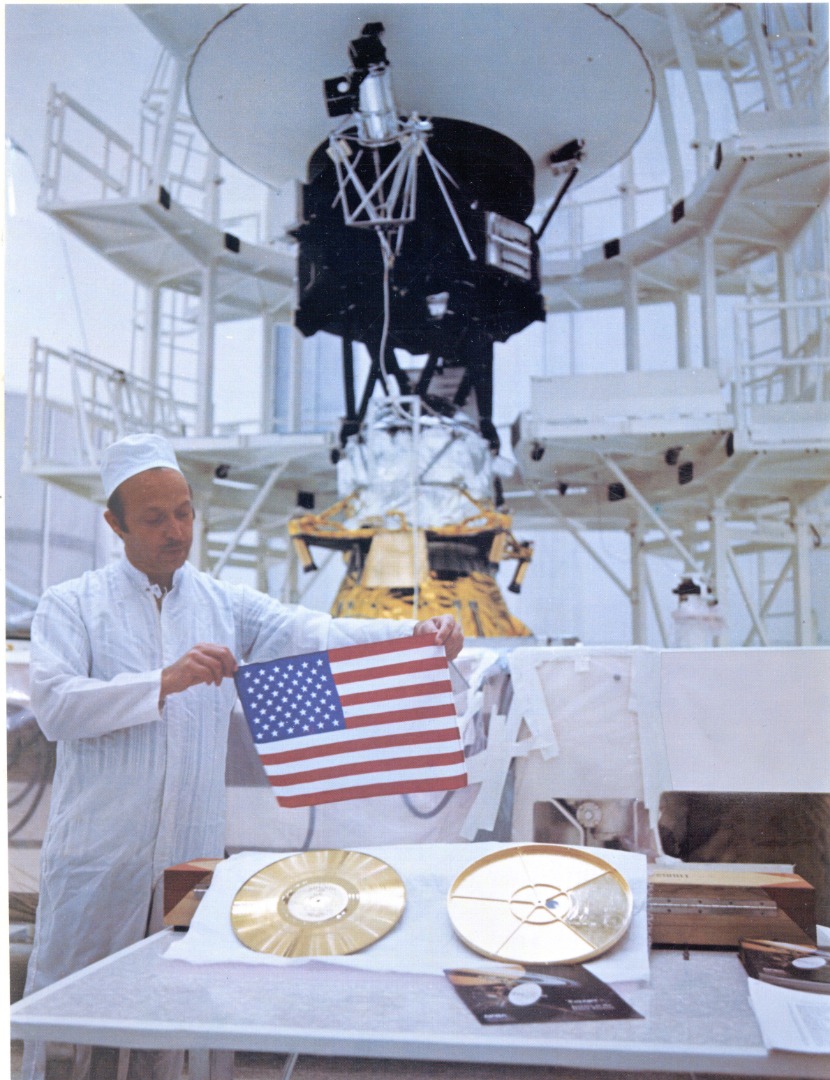 John Casani, Voyager project manager, holds a small American flag above one of the Voyager Golden Records, destined for flight aboard Voyager 2 in the background. August 1977 NASA/JPL-Caltech photo

Over the past decade, NASA and JPL have enabled citizens to send their names to space; these names have been collected and placed on microchips aboard various spacecraft. One example of a spacecraft carrying such a microchip is the Mars Perseverance Rover, which currently explores the Red Planet’s Jezero Crater (and is flanked by a small Mars helicopter, Ingenuity).

Just like the Voyager Golden Records, the Celestis MindFiles™ will contain messages from Earth, except this time, they’re from people like you – not relegated to scientists or engineers only. For the affordable price of $19.95, you can send your message, a special photo, or art on an indestructible nickel disc that will permanently orbit the Sun. This message could, one day, be a ”hello” to another generation or lifeform. (For no charge, you can also send your name aboard the Enterprise Flight.)

Fun fact: if you’d like to track the estimated deep space locations of the Pioneer and Voyager spacecraft, you can do so via NASA’s Eyes on the Solar System website. When Celestis’ Enterprise Flight establishes a stable solar orbit, it will be renamed Enterprise Station, and you will be able to track it via our satellite tracker.

The idea of sending the double-helix-shaped human genetic footprint – deoxyribonucleic acid or DNA – to space as a “signal” and for study has been alive for years. It has been theorized that DNA originated from space, and the International Space Station has provided a scientific platform in space for scientists to study the effects of spaceflight on human DNA. Spaceflight participant Richard Garriott, one of the only second-generation space travelers (his father, NASA astronaut Dr. Owen Garriott, flew on Skylab and the Space Shuttle), took a large memory device called the Immortality Drive to the International Space Station in October 2008, which carried the encoded genetic markers of several celebrities such as television host Stephen Colbert and famed physicist Stephen Hawking. According to Garriott, people clamored to be a part of the Immortality Drive: “That desire to participate...in the dream of spaceflight is fairly universal…it’s much more ingrained than even I had predicted,” he stated in an interview with Alan Boyle. 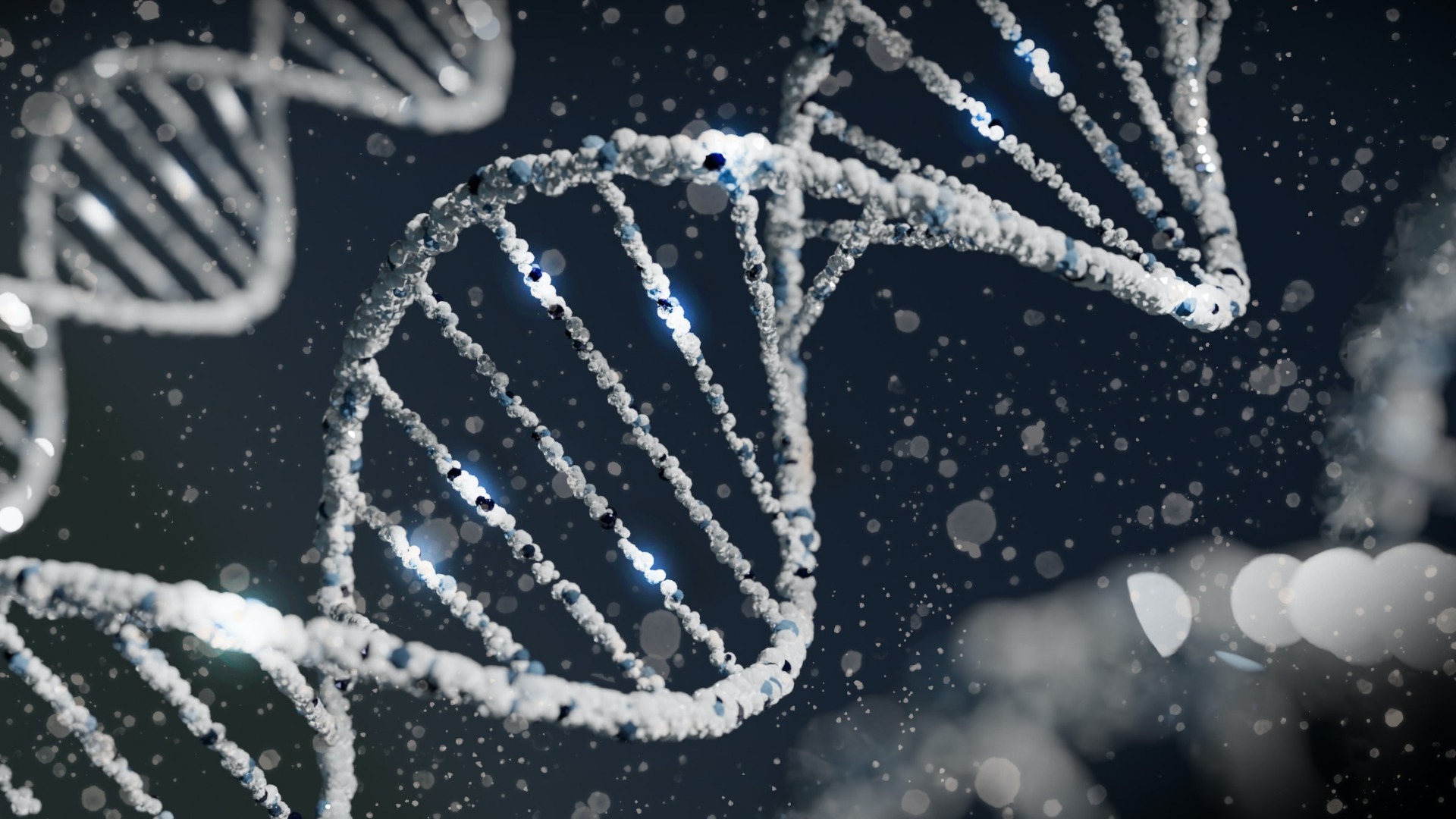 Photo by Sangharsh Lohakare on Unsplash

The topic of DNA in space is exciting and relatively new. That’s why Celestis has introduced Celestis DNA™, a way for all humans to have the capability to send their unique genetic marker to space to celebrate their life, regardless of final burial disposition.

The journey starts by performing a non-invasive mouth swab; Celestis DNA™ will also provide a home DNA banking kit, so families can access genetic information that may aid with future health diagnostics or ancestry questions. The entire human genome is then encapsulated in aerospace-grade Titanium 5, the gold standard in space shielding; this ensures your genetic material will not be damaged or compromised in the harsh deep space environment (in addition, it works in reverse and keeps the deep space environment uncontaminated by human material). Another exciting feature of Celestis DNA™ is that it offers you or your loved ones a unique opportunity for interstellar migration. One’s DNA signature can be beamed to other galaxies, allowing all to have the chance to “travel” through space and time for all eternity.

When Enterprise Flight becomes Enterprise Station after establishing a stable solar orbit, it will become the world’s first true outpost of humanity in deep space with its DNA and MindFiles. Messages and DNA in space used to be limited to the realms of scientists, space travelers, or celebrities. But now, you can send your DNA to space or send your special message along with photos or art – and you can represent the hopes and dreams of Earth’s people on a once-in-a-generation journey. Come fly with us!