William Pogue, Among The Stars Again 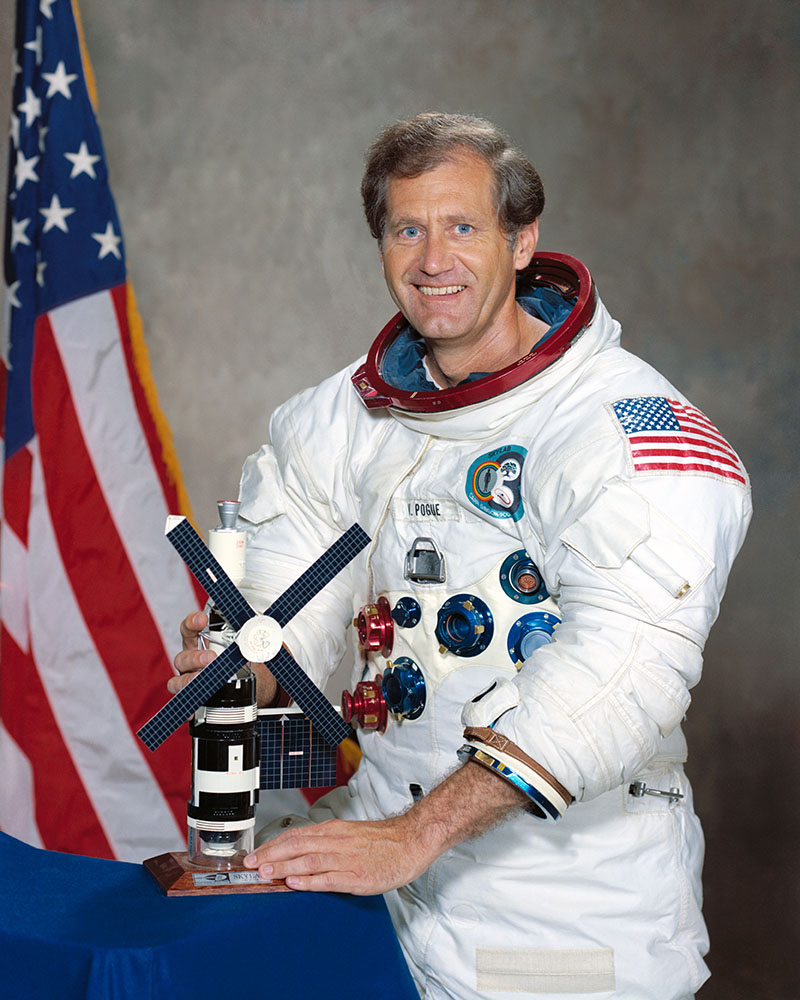 I raised the visor on my helmet cover and looked out to try to identify constellations. As I looked out into space, I was overwhelmed by the darkness. I felt the flesh crawl on my back and the hair rise on my neck. - William Pogue, from How Do You Go To The Bathroom In Space?: All the Answers to All the Questions You Have About Living in Space

And see constellations he did. Astronaut William “Bill” Pogue, along with his two Skylab 4 crewmembers Gerald Carr and Dr. Edward Gibson, was a long-duration spaceflight champion up until the mid-1990s, spending 84 days in Earth orbit. Pogue passed away on March 3, 2014, at age 84. On June 25, 2019, a portion of his ashes was sent into Earth orbit via a mighty SpaceX Falcon Heavy thanks to Celestis Memorial Spaceflights. Some may ask, why did someone who had already flown in space choose to have a portion of his ashes sent there? Or even, why would anyone choose to send his or her ashes into space, period?

This author thinks Pogue’s life story might be able to better answer those questions. Years before his acceptance to NASA’s astronaut corps in 1966, Pogue was part of the U.S. Air Force’s elite Thunderbirds, the air demonstration squadron of that military branch. “He was very good at what he did, which was being a pilot,” his son Tom explained in an interview. 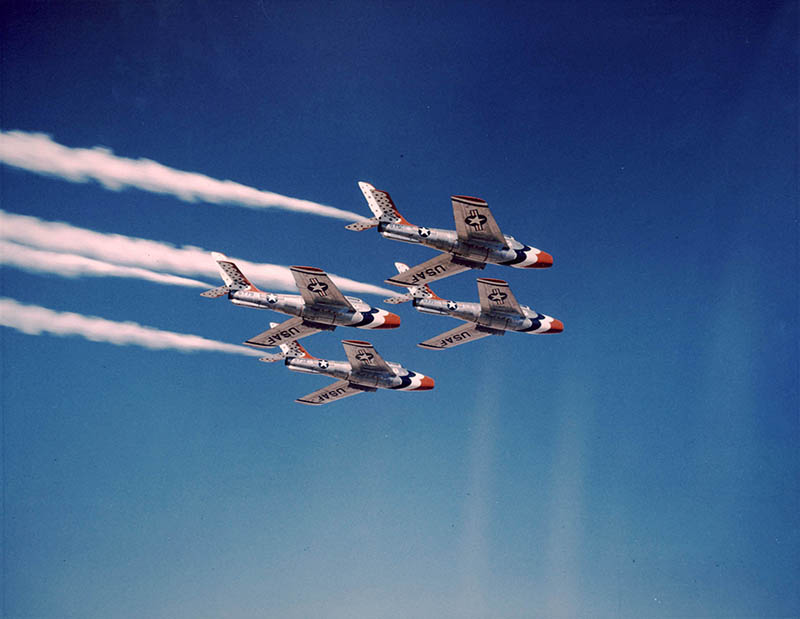 Four Republic F-84F Thunderstreak -- one of the types of aircraft flown by William Pogue for the U.S. Air Force Thunderbirds aerobatics team -- flying in formation in 1955/56. Image Credit: US Air Force

The elder Pogue was also great at finding innovative solutions to common problems, which is quite useful in aviation and spaceflight. “He was also a mathematician. He showed me how to use an abacus in a couple of minutes, and he also explained to me the theory of the atomic bomb probably in about 10 minutes…I actually understood what he said. I remember one time he took an old lawn mower, attached a board on the bottom of it, drilled a hole into it, and attached a hose to it. He made a lawn vacuum out of it. When we were [stationed] in England, we came home from school one day and there were wood shavings all over the front yard. Dad had gotten some wood, and whittled some stilts for me, my older brother, and sister using a pocket knife. I was probably around five or six.”

A few years after the family’s stretch in England, Pogue and 18 other pilots were announced as being part of NASA’s newest astronaut class. Several members of this class would either orbit the Moon or walk upon its surface during the Apollo lunar missions. A few would fly on Skylab, the first U.S. space station, which grew out of the agency’s Apollo Applications Program. Pogue would be assigned to the last Skylab crew, and seven years after becoming a NASA astronaut, he launched aboard a Saturn IB rocket en route to Skylab on November 16, 1973. 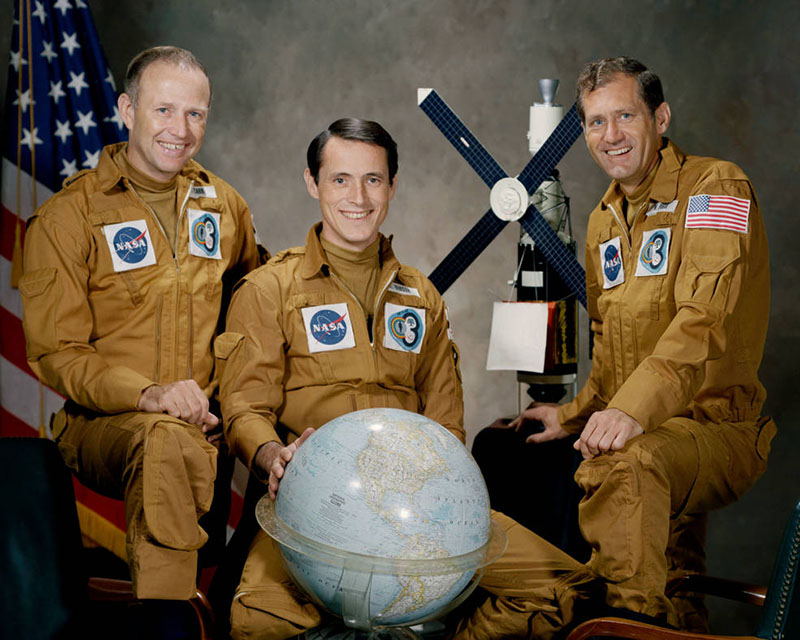 In the mission’s beginnings, things were not all smooth sailing. This would serve to be the last Skylab mission, as agency-wide budget cuts had scuttled any hopes for another mission and a second Skylab space station. Mission planners knew this would be their last chance to perform in-flight experiments before the Space Shuttle eventually flew, and loaded Skylab 4 with activities and tasks for the crew to complete.

Pretty soon, the crew and the ground began to see that the packed schedule was doing no one any favors. About six weeks into the mission, the crew – understandably frustrated by the schedule – was beginning to ask for time off. The crew was granted a day off, in agreement with Mission Control; it bears mentioning that they even performed some experiments during that time (for example, mission scientist Gibson studied the Sun using the space station’s Apollo Telescope Mount, a powerful solar observatory). It was certainly not anyone’s idea of a “strike.” However, this one day off did not fix the heart of the problem – the prohibitively tough scheduling.

Within days, the crew would have what Carr called a “seance” with Mission Control to work through the issues they were experiencing (for example, the frenetic pace of the experiments caused them to make mistakes). This approach – the mission’s commander advocating for his crew – worked as intended, and Skylab 4 went on to have the most successful mission of all three Skylab crews. They worked even more efficiently than the second crew, who had earned the moniker “The Supercrew” from the media. They returned triumphantly back to Earth in February 1974, and the Skylab program was dubbed a success.

However, throughout the decades, a myth began to propogate around Skylab 4 that would depict the crewmembers as having gone on “strike,” or having “mutinied” against Mission Control during their mission. Nothing could be further from the truth, but only in recent years has Skylab 4’s reputation been restored, most notably by a recent NASA write up that completely vindicated Carr, Gibson, and Pogue. Even better, rare footage unearthed in the documentary Searching for Skylab shows the crew having what looked like a fun time in space. And Pogue shined as the science superstar of the crew, perhaps even more than the crew’s solar physicist, Gibson.

A NASA video from Skylab 4 showing astronauts having fun!

Two examples of Pogue’s impromptu scientific experiments included a tutorial discussing orbital mechanics while commander Carr boosted Skylab’s orbit inside the attached command and service module, and, most humorously, Pogue donned cardboard fins to attempt “swimming” inside the station’s spacious orbital workshop (note: these fins did not work well, but they sure amused Carr and Gibson). Pogue’s son Tom added, “Dad was really good at explaining things. When he was figuring out how to fix a problem or fix something, I would sometimes watch him…he would solve the problem or whatever in a way that you never even thought of.”

In 1975, shortly after returning from 84 days in orbit, Pogue retired from NASA. He worked as an aerospace consultant, and also wrote several books. The one perhaps with the most memorable title is How Do You Go to the Bathroom in Space? Released during the mid-1980s, it cataloged some of the most popular questions Pogue received following his spaceflight experience, and also shows his distinctly down-to-Earth (pardon the pun) sense of humor. Tom can verify that his dad had a good sense of humor about some of the less appetizing aspects of space travel: “One time I was with Dad when he was at Johnson Space Center in Houston. He was showing a relative the [Skylab] mock up, walking through and explaining things, when he got to the part about how they use the bathroom. The relative was asking how it worked, and Dad looked at him with a smile and said, ‘Do you want me to give you a demonstration?’” 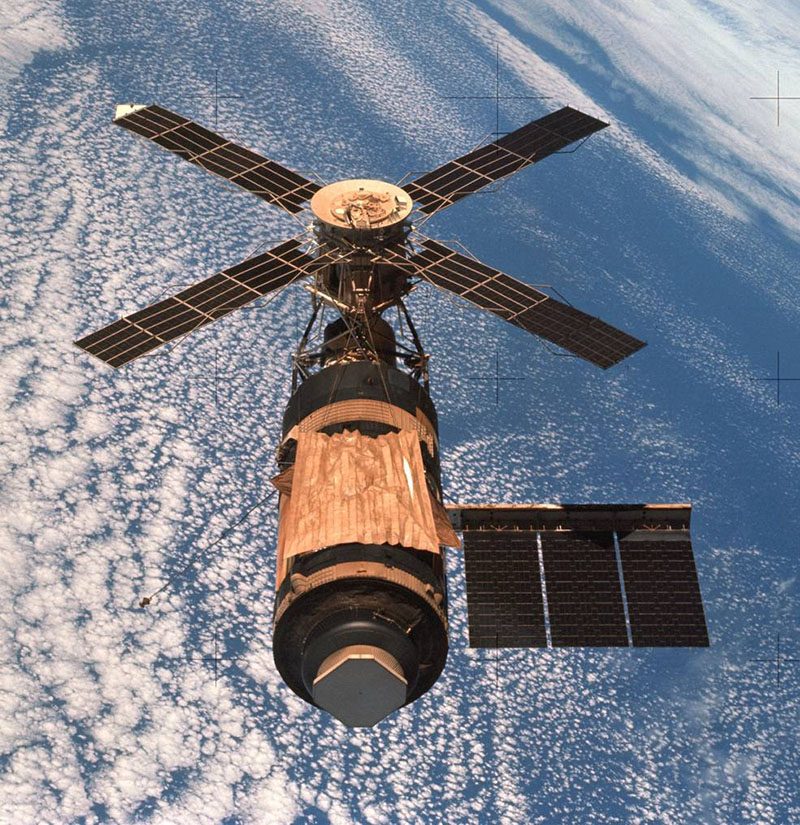 Skylab as viewed by Pogue and his two cremates on the Skylab 4 mission. Image Credit: NASA

In his later years, Pogue continued to discuss his 84 days in space at events and autograph shows; in his last months, he attended the Skylab 40th anniversary gala at Kennedy Space Center thrown by the Astronaut Scholarship Foundation, gleefully talking about his time in low Earth orbit on a delightful panel with his surviving Skylab colleagues. His death came as a shock to those in the space community, because like many of the Apollo-era astronauts, he hadn’t slowed down a bit with age. But again, on June 25, 2019, Pogue’s name was in the news again – and tied with another spaceflight. On that night in 2019, he lit up the skies in Central Florida one last time, with a stunning launch visible from the other side of the state. How? Why? 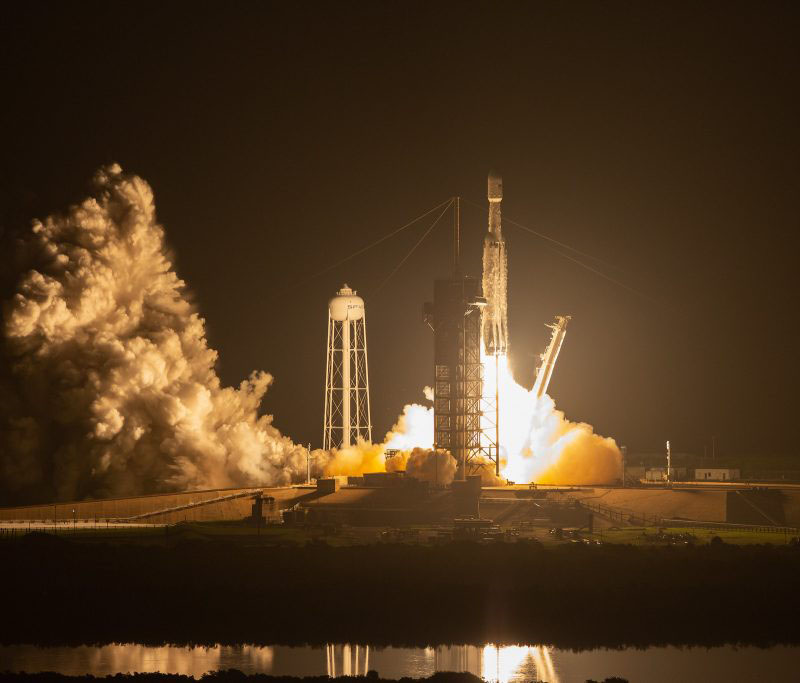 The Celestis Heritage Flight, carrying William Pogue and over 150 other participants, lifts off from Launch Complex 39A at 2:30 a.m. EDT on June 25, 2019, at NASA’s Kennedy Space Center in Florida. Image Credit: NASA/Cory Huston

Memorial spaceflights, first, are not a new concept. A previous blog titled “A Cultural Imperative” on Celestis’ website explains, “The Celestis concept reaches deeply into the human experience – the earliest fictional literature postulating the possibility of humans leaving Earth included discussions of off planet funeral rituals and services. It is only natural that as we move throughout the solar system we will take all of our celebrations and memorials with us – adapting and extending them to the unique circumstances of spaceflight and off Earth existence. As spaceflight turned from concept into reality, it was inevitable that Memorial Spaceflights would become an integral part of the space age.”

One of the early participants of the space age, Pogue understood possibly better than anyone else that the idea of “burial in space” wasn’t just some crazy fantasy; as humanity further entered space, memorial spaceflights would make as much sense as, say, burial at sea, or having one’s ashes spread at a special place filled with good memories.

And for Pogue, space and the skies – two places he had lit up, once as a Thunderbird, and once atop a fiery rocket – were places full of good memories.

So when you look up into the skies, while Skylab itself is long gone, you can always remember that a part of the program is among the stars again, thanks to Celestis Memorial Spaceflights.