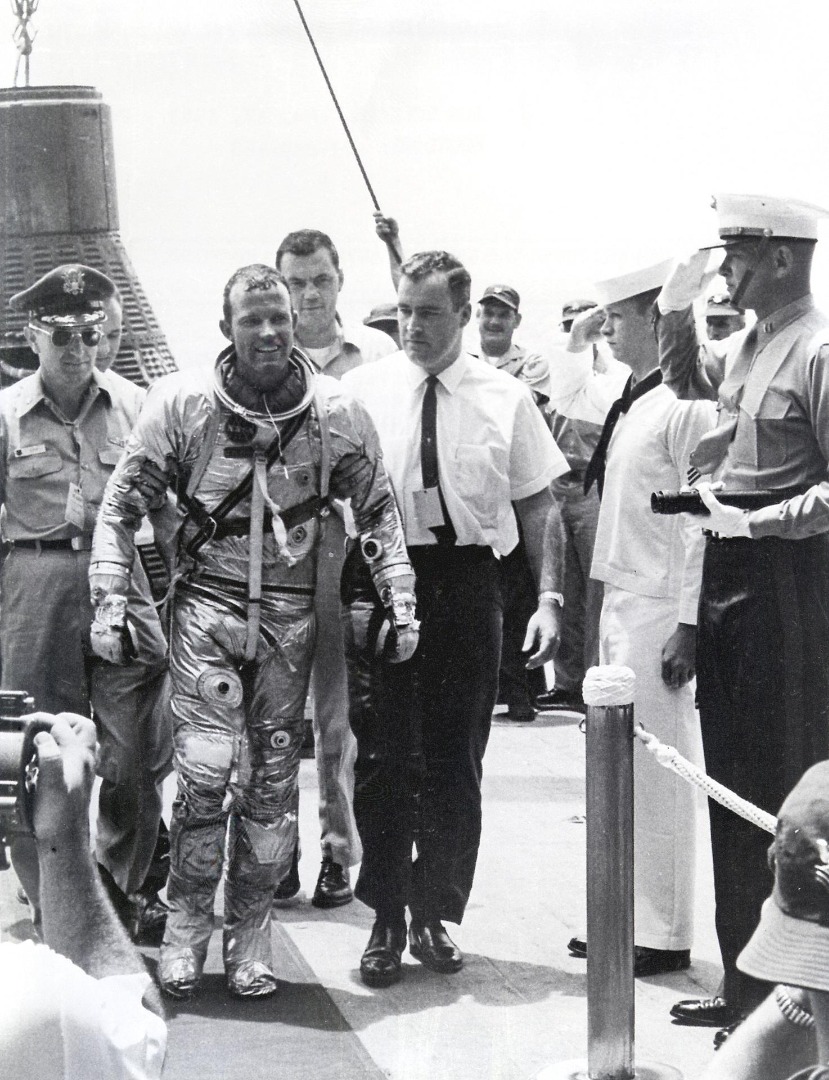 Celestis’ parent company, Space Services Inc. of America, even boasted one of NASA’s first astronauts as its president. Donald L. “Deke” Slayton, who was initially disqualified from spaceflight for medical reasons but eventually flew aboard 1975’s Apollo-Soyuz Test Project mission, helped usher in the era of commercial spaceflight, starting with 1982’s Conestoga 1.

Celestis has flown the ashes of two Mercury-Gemini-Apollo era NASA astronauts to space, fulfilling their final wishes in the same manner that mariners wish to be buried at sea. Moreover, Celestis will fulfill the lifetime dream of former NASA astronaut-scientist Dr. Philip Chapman, who resigned his NASA post before he was able to fly to space. Celestis has also hosted many astronauts at its pre-launch events, allowing event guests to meet the elite people who have experienced the phenomenon of spaceflight.

These days, it’s difficult to understand how famous NASA’s “Mercury 7” astronauts were after their identities were revealed in 1959. America’s first astronauts’ faces were splashed upon magazine cover after magazine cover, and their early spaceflights stopped regular television programming. The youngest of the Mercury 7 astronauts and the last of the group to fly in space, L. Gordon “Gordo” Cooper, Jr., certainly embodied the archetype of the early 1960 space traveler: he was a test pilot, an aeronautical engineer, and had confidence in spades.

Born on March 6, 1927, Cooper’s roots in aviation stretched back to childhood, as his father was a U.S. Air Force colonel with piloting experience. By the early 1950s, Cooper had joined the Air Force and eventually served alongside fellow Mercury 7 astronaut Virgil I. “Gus” Grissom, who became the second U.S. person in space. In April 1959, Cooper and Grissom – alongside John Glenn, Alan Shepard, Deke Slayton, Wally Schirra, and Scott Carpenter – were named as the United States’ first group of astronauts after undergoing an exhaustive series of examinations. (In an ironic twist, Slayton later played a defining role in the original Celestis Memorial Spaceflights concept.) By 1961, Shepard and Grissom were making the first U.S. suborbital flights in space. While “Gordo” had to wait until May 15, 1963 to make his first spaceflight aboard Faith 7, his flight would prove to be one of the most vital test missions of the early Space Age.

Problems began stacking up for Cooper near the end of his 22-orbit mission. First, a power failure caused cabin temperatures to rise to a Saharan 130 degrees Fahrenheit. Secondly, the spacecraft’s clock and gyroscopes failed. Working as a consummate test pilot, Cooper placed the spacecraft into the correct orientation for reentry – no small task, as the Mercury capsule was meant for automatic flight only with little to no pilot input. This proved that a seasoned pilot was needed to complete space missions. Cooper’s spacecraft landed within four miles of the recovery ship, the USS Kearsarge; he was no worse for the wear despite his ordeal.

The U.S. space program was going from strength to strength, and less than two years later, the first two-person Gemini flights – which would demonstrate rendezvous and docking skills required to fly to the Moon – were underway. On August 21, 1965, Cooper and then-rookie “New Nine” astronaut Charles “Pete” Conrad launched aboard a Titan II rocket, beginning the Gemini 5 mission. The mission’s slogan was “eight days or bust.” The crew completed the eight days in Earth orbit, setting what was then a duration record in space (in a spacecraft with interiors the size of a Volkswagen Beetle, no less).

Cooper resigned his NASA post in 1970 and entered private business, including a stint at The Walt Disney Company in EPCOT Center research and development. He died in October 2004 at 77, but his space odyssey was far from over. Cooper’s ashes have flown aboard three Celestis Memorial Spaceflights: the Explorers, Legacy, and New Frontier Flights. These were fitting tributes to an early Space Age pioneer who never stopped looking towards the future and the stars.

Years before his acceptance to NASA’s astronaut corps, William “Bill” Pogue was part of the U.S. Air Force’s elite Thunderbirds, the air demonstration squadron of that military branch. “He was very good at what he did, which was being a pilot,” his son Tom explained in an interview. In April 1966, Pogue and 18 other pilots were announced as NASA’s newest astronaut candidates, assigned the humorous moniker “The Original 19” by astronaut John W. Young. These astronauts are now regarded as one of NASA’s finest group of spacefarers, having flown Apollo, Skylab, and Space Shuttle program missions. Pogue would be assigned to the last Skylab space station crew, Skylab 4; the crew – Pogue, commander Gerald Carr, and science pilot Dr. Ed Gibson – launched aboard a Saturn IB rocket on November 16th, 1973, en route to America’s first scientific platform in Earth orbit. 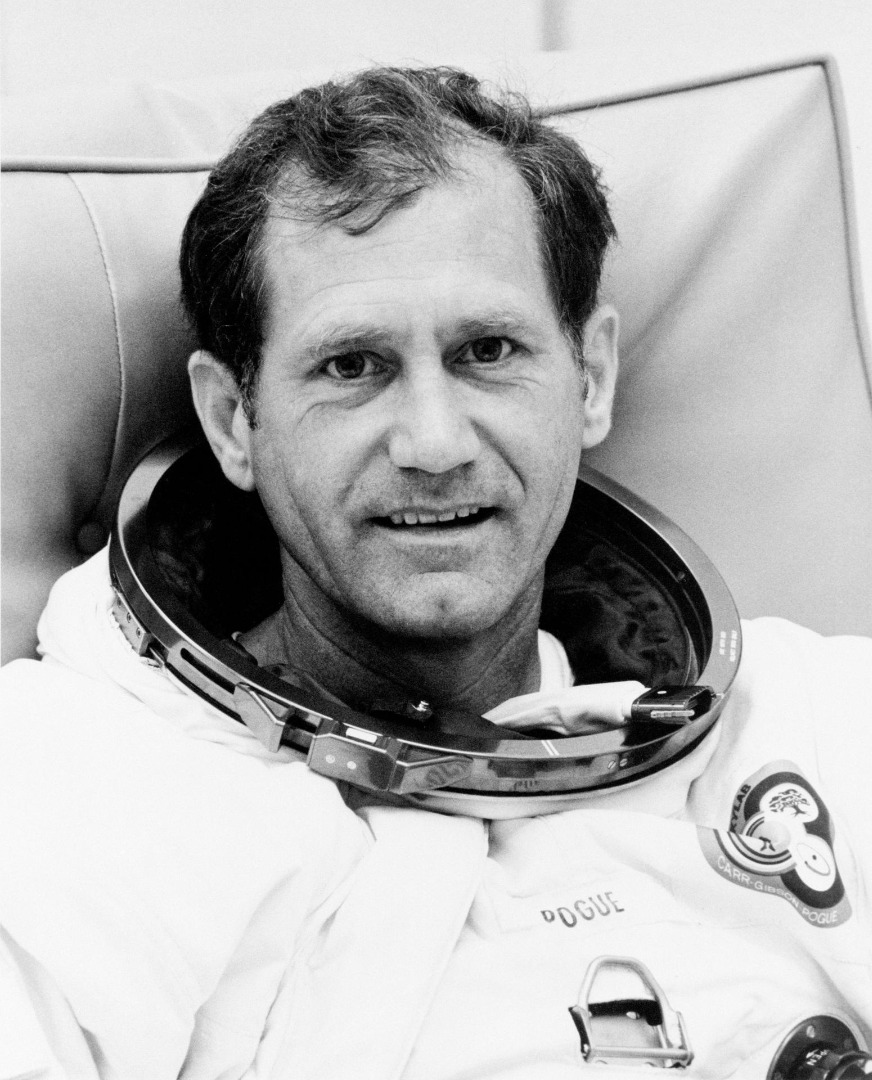 Pogue was in his element in microgravity and shined as the mission’s science superstar. Two examples of Pogue’s impromptu scientific experiments included a tutorial discussing orbital mechanics while commander Carr boosted Skylab’s orbit inside the attached command and service module, and, most humorously, Pogue donned cardboard fins to attempt “swimming” inside the station’s spacious orbital workshop (note: these fins did not work well, but they sure amused Carr and Gibson). Pogue’s son Tom added, “Dad was really good at explaining things. When he was figuring out how to fix a problem or fix something, I would sometimes watch him…he would solve the problem or whatever in a way that you never even thought of.” Skylab 4 was the most successful of the three visits to America’s first space station, yielding an enormous scientific harvest.

In 1975, shortly after returning from 84 days in orbit, Pogue retired from NASA. He worked as an aerospace consultant and also wrote several books. The one perhaps with the most memorable title is How Do You Go to the Bathroom in Space? Released during the mid-1980s, it cataloged some of the most popular questions Pogue received following his spaceflight experience. It also shows his distinctly down-to-Earth (pardon the pun) sense of humor. Tom can verify that his dad had a good sense of humor about some of the less appetizing aspects of space travel: “One time I was with Dad when he was at Johnson Space Center in Houston. He showed a relative the [Skylab] mock-up, walking through and explaining things when he got to the part about how they use the bathroom. The relative was asking how it worked, and Dad looked at him with a smile and said, ‘Do you want me to give you a demonstration?’” Pogue was active in the space community, giving lectures and attending events up until the end of his accomplished life.

Pogue’s passing in March 2014 at age 84 was also not the end of his spaceflight adventure. On June 25th, 2019, Pogue’s ashes were rocketed into Earth’s orbit aboard Celestis’ Heritage Flight aboard a mighty SpaceX Falcon Heavy launch vehicle. His ashes are currently orbiting the Earth west to east, completing an orbit approximately every 90 minutes. Once again, Pogue is in his element, back in the microgravity that delighted him during his 84 days aboard Skylab.