Celestis Connects: How Celestis Helps Families and Friends of Loved Ones 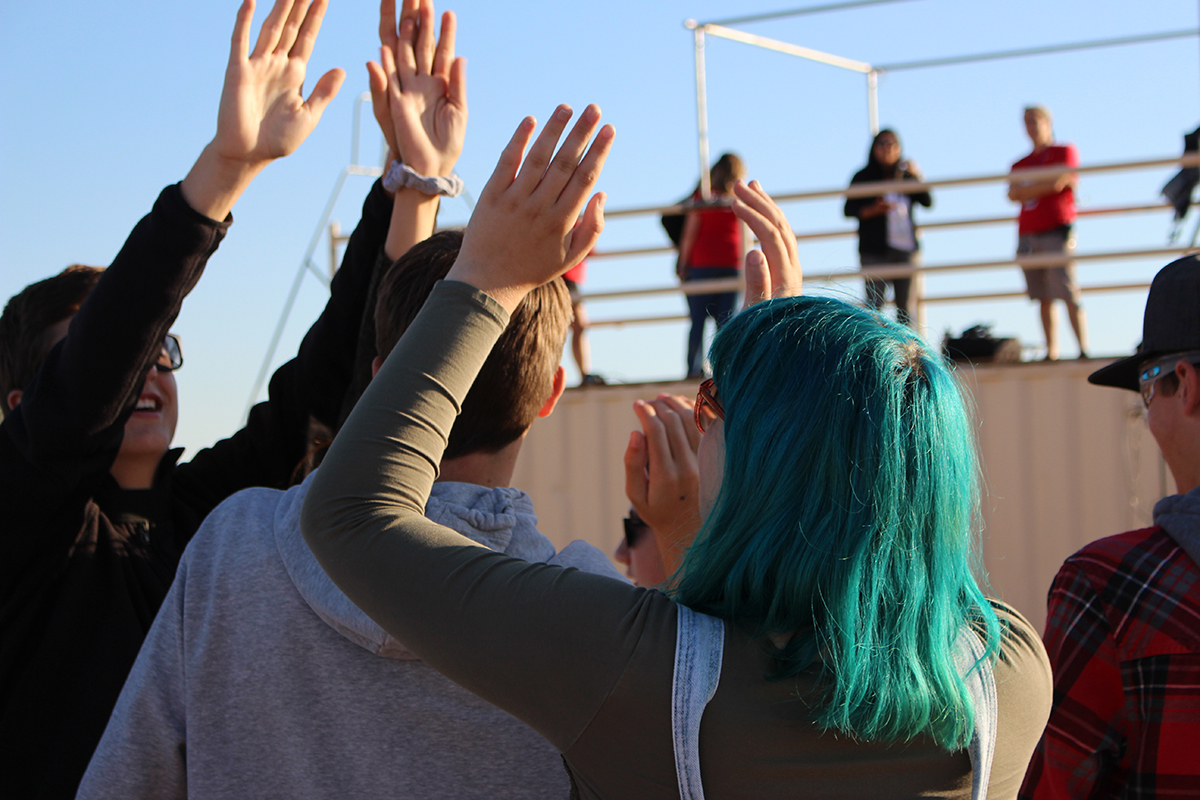 Celestis family members high five each other immediately after their loved one was launched into space from Spaceport America, New Mexico on the Celestis Starseeker Flight.

There was a time when the mere idea of “burials in space” seemed like an outlandish pipe dream. There was curiosity about not just how lying someone to rest in space could happen, and there were concerns about the logistics – after all, spaceflight isn’t just a “common,” routine thing. A little over 60 years ago, when spaceflight was a brand-new technology, launches were way more susceptible to glitches than successes. The idea of a memorial spaceflight – much less being able to visit the spacecraft that would vault such a memorial into space before its flight – lived within the realm of science fiction magazines and feature films such as Star Trek II: The Wrath of Khan.

However, fast forward to 2022, and the rise of commercial launch providers has made space increasingly more accessible. As a result, the idea of space burials is also not as unusual as it seemed in previous decades. A blog by Celestis entitled “A Cultural Imperative” emphasized, “It is only natural that as we move throughout the solar system, we will take all of our celebrations and memorials with us – adapting and extending them to the unique circumstances of spaceflight and off Earth existence.”

In 1994, Celestis, Inc. was founded by Charles M. Chafer and R. Chan Tysor partly to fulfill the dream of former Mercury 7 astronaut Donald K. “Deke” Slayton, who was one of the figures behind Celestis’ parent company, Space Services Inc. of America (SSIoA). Slayton had envisioned memorial spaceflights as far back as the early 1980s, but they had not materialized during his lifetime. By April 1997, Celestis was ready to fly its first mission – but beforehand, the fledgling company also wanted to honor the families whose loved ones were aboard that historic first flight.

Prior to the launch of Orbital Science’s Pegasus XL rocket, which carried the ashes of 24 pioneers, including Star Trek’s creator Gene Roddenberry, rocket scientist Dr. Krafft Ehricke, space settlement visionary Dr. Gerard K. O’Neill, and 1960s counterculture figure Timothy Leary, families and friends were invited to Vandenberg Air Force Base (now Vandenberg Space Force Base) in California to see the launch vehicle and its associated hardware. They received an up-close look at the rocket and took a tour to view the Stargazer aircraft, which carried the Pegasus XL launch vehicle to 38,000 feet in altitude before its release.

On April 21, 1997, Founders Flight families and friends were present as the Pegasus XL, following its release from Stargazer, fired its main engine over the Canary Islands in Spain, signaling the beginning of the rocket’s three-stage powered flight into low Earth orbit. This launch not only proved to be Celestis’ successful inauguration into the world of commercial spaceflight but also set the template for creating special memories for spectators watching their loved ones make their final journey. Shortly after this flight, co-founder Chafer remarked, “We honor all the families who participated in The Founders Flight. Their perseverance has been rewarded – beginning today, a fitting memorial to their loved ones will orbit overhead every ninety minutes, and we’ll always remember them.”

The Founders Flight also brought to light that multiple members within families viewed memorial spaceflights as a way to be symbolically reunited in the heavens. When The Founders Flight flew a portion of Roddenberry’s ashes, his widow, Majel, expressed to Chafer her desire to rejoin her husband when the time came. “Celestis sponsored a gathering of family members, and Majel came… that’s where first I met her. She said, ‘You know, Charlie, the reason I told you ‘yes’ is that I promised myself that when it was my time ago, I’d go on a forever space flight.’ And I said, ‘I think we’ll be able to do that at some point.’…So I said yes, having no idea then how to fulfill it, but I was confident in the upward – even back then, during the mid-Nineties – trajectory of commercial space missions. I said to her, ‘Yes, certainly, we’ll be able to do that.’”

When Majel passed away in 2008, Chafer resolved to make her wishes a reality. “At the time of her passing, her son, Rod, who was aware of the agreement and enthusiastically supported the agreement, invited me out to her funeral service…Rod announced from the stage, ‘Mom’s going to fly with Dad on a deep space mission.’ I’m honor-bound because I promised Majel for several years that I’d find the ability to fulfill her request. The coming of this mission…represents to me a full circle. That’s the genesis of Voyager.” Celestis’ first Voyager-series deep space mission, the fittingly-named Enterprise Flight, will at long last reunite Gene and Majel this summer.

Newer technologies have also made it possible for families to be reunited, even if they do not choose cremation as an end-of-life option. For example, the Celestis DNA service allows the entire human genome to fly to space. Those interested in this option can participate in a “living tribute,” meaning they can be symbolically united with lost family members while their souls are still earthbound.

The tradition of pre-flight tours that began with the Founders Flight has continued throughout the decades Celestis has flown missions. Attendees of loved ones who fly aboard Earth Rise flights out of Spaceport America, New Mexico, according to Chafer, “…always participate in a pre-launch tour of the launchpad and mission control center for UP Aerospace SpaceLoft XL missions. In addition, clients are briefed personally by UP founder and CEO Jerry Larson. The opportunity for a ‘last goodbye’ and ‘bon voyage’ at the pad pre-launch is a special and intimate moment for our families.”

Chafer added, “More recently, as some Celestis missions are being housed on satellites or spacecraft, manufacturers tours are offered. For the Heritage Flight, more than 75 family members were able to tour the General Atomics satellite manufacturing facility in Denver. The NASA OTB satellite was presented – including the Celestis payload – as it was undergoing final testing before being shipped to Florida for launch aboard a Falcon Heavy rocket. General Atomics staff provided a complete mission briefing and wished the Celestis crewmates a successful flight.” This experience culminated in families and friends being able to witness the incredible night launch of the mighty SpaceX Falcon Heavy that carried Celestis’ payload – a launch that lit up much of Florida.

The tours featuring real space hardware are how Celestis endeavors ensure these missions are powerful experiences for families and friends. The multi-day launch events allow for diverse groups of people from around the world to remember loved ones together and in sharing stories, building special bonds leading up to an emotional launch – often the first space launch attendees have viewed “in person.” A previous Celestis blog underscored, “These special memories, connections, and joys help in so many ways to lessen the loss that we feel. During the multi-day launch events, there is time for reflection, healing, and celebration.” The Celestis experience doesn’t end when the launch itself. Many of the connections built at the event continue to grow and flourish for years to come. You are forever a part of the Celestis family.

Indeed, those who have experienced Celestis’ three-day launch events agree. James Doohan, Star Trek’s “Mr. Scott,” has flown aboard three previous flights – the Explorers, Legacy, and New Frontier flights. His widow, Wende, expressed her feelings about Celestis memorial spaceflights: “It’s a unique experience because memorials are for the living… you’re mourning the loss of someone that you cared about a great deal, and yet, when the rocket goes up – as much as you miss them, as much as you love them – you are so excited, so happy, and so joyful that you get to experience what they really wanted. And you know that they are somewhere yelling ‘Ya-hoo!’ because they finally made it. It’s an unbelievable experience.” 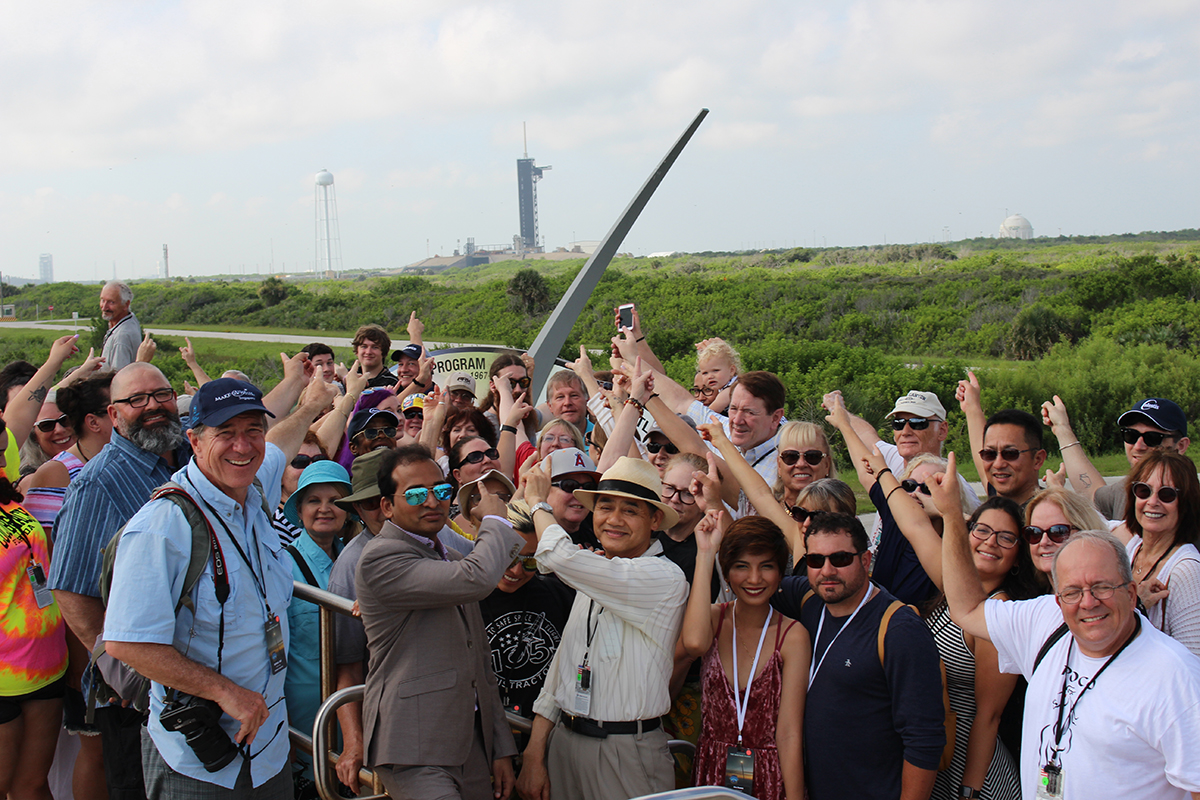 Celestis Heritage Flight families at NASA's Kennedy Space Center point to the launch pad where their loved ones would begin their journey in space the next day.

Katherine Stewart, the daughter of Edward Stewart, who flew aboard the New Frontier memorial spaceflight in May 2012, also expressed her joy in seeing her father’s wish fulfilled as a SpaceX Falcon 9 rocket leapt off the launchpad on a column of fire. “I cannot express how thrilled my family is about the launch. It is truly a wonderful day. We watched from our homes, but we celebrated with the entire Celestis and New Frontier family. Thank you, a million times over, for the opportunity. This was the only idea about which Dad showed any enthusiasm as we talked with him about his memorial service – and oh, the enthusiasm he had for this,” she raved.

Can’t make it to the launch in person? No problem, Celestis streams their launches and meticulously photographs and films each launch event for families, friends, and loved ones. And, did you know that the positions of many Celestis memorial spaceflight participants can be “tracked” after their launch? The company’s easy-to-use satellite tracking webpage makes that possible, and with the Celestis AboveTM satellite tracker, you are automatically alerted when your loved one is flying overhead.

Memorials are often characterized as somber events, which is understandable since families suffering monumental loss also experience great grief. However, Celestis has endeavored to make memorial services not just memorable but joyful tributes to lives well-lived through their multi-day launch events and beyond. A quote from Celestis co-founder Chafer sums it up best:

"Celestis missions consist of so much more than the actual launch. For family members who are eager to know about and participate in their loved one’s mission, we always strive to provide a fulfilling memorial and much more."