Space Medicine, Past, Present, and Future: From Dr. McCoy to the ISS 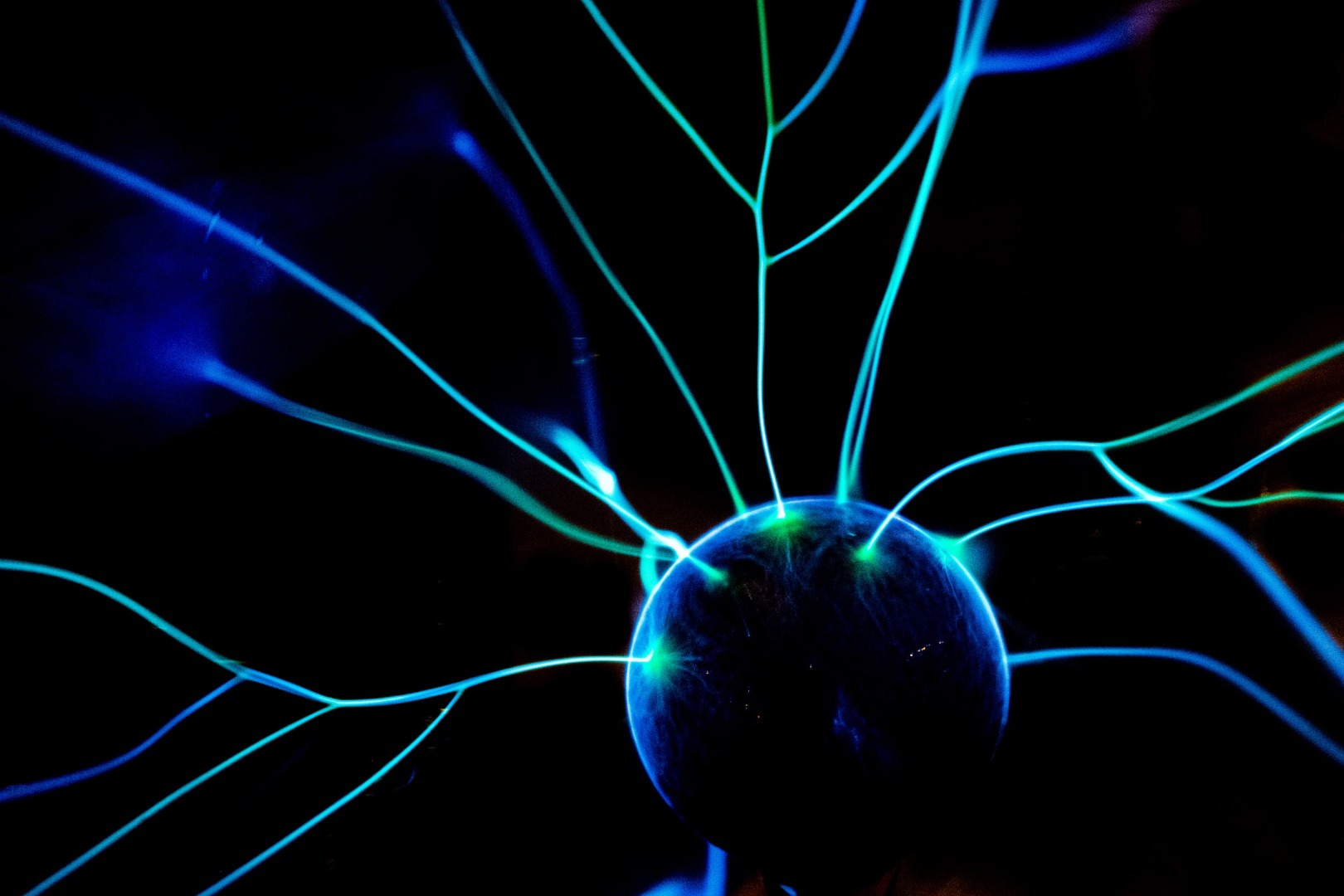 Since Star Trek® debuted in 1966, many U.S. doctors have become astronauts and made their own space voyages. In addition, thanks to NASA’s research, the last 50 years have been a watershed time for medical innovations that have saved countless lives on Earth but were derived from space-based technologies.

The Real McCoys: From Skylab to the International Space Station

During the 1970s, years after the original Star Trek® had been canceled and before the debut of feature-length movies based on the series, DeForest Kelley began attending fan conventions. He found that many times at these events, fans would walk up to him and tell him how McCoy had inspired them to enter the medical profession, just as many women and minority fans were inspired by the examples set by Lt. Uhura and Mr. Sulu (played by Nichelle Nichols and George Takei, respectively). This greatly touched Kelley; several times a month in the following decades, he received letters stating the same sentiments – that his television (and movie) character had led fans to become doctors or nurses. “I'd wanted to become a doctor and couldn't - yet became the best-known doctor in the galaxy,” Kelley once proudly mused. 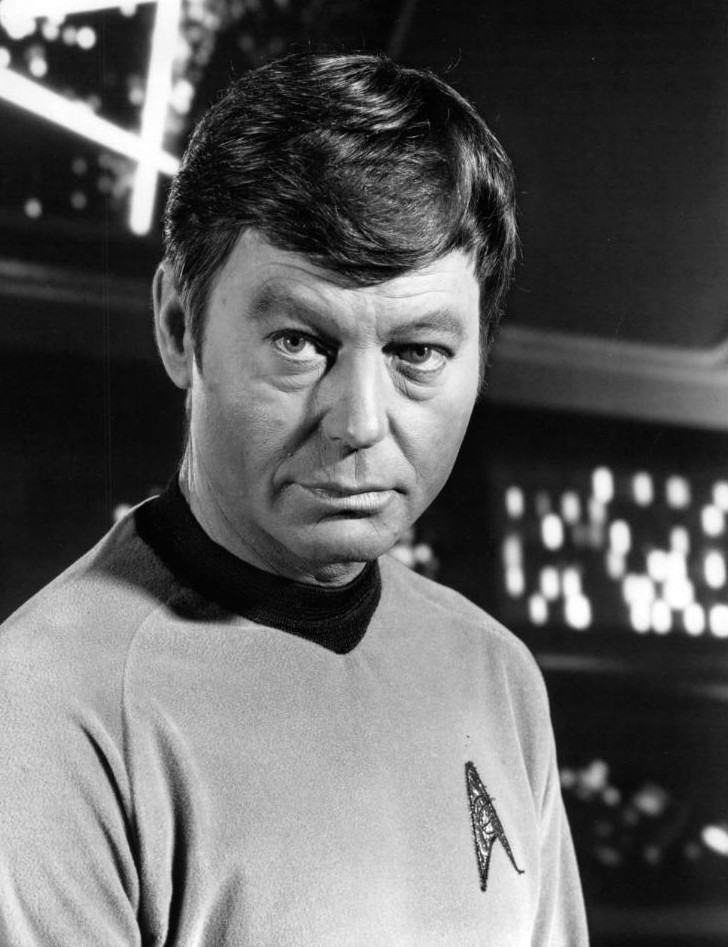 Just like the fictional Starship Enterprise, NASA developed its own contingent of doctors and medical experts. Nurse Dee O’Hara was one of the early astronauts’ most beloved, trusted confidants, administering injections and comfort in equal doses. In 1973, the first U.S. physician in space launched aboard a Saturn IB rocket headed for America’s first space station, Skylab. Dr. Joseph P. Kerwin, who had been selected in 1965 as part of NASA’s first group of astronaut scientists, was humorously called “Bones” by colleagues. While the three Skylab missions revealed a wealth of bodily changes that occurred in the space environment (such as spines lengthening by as much as two inches), one of Kerwin’s most challenging “surgeries” in orbit involved salvaging the damaged space station. 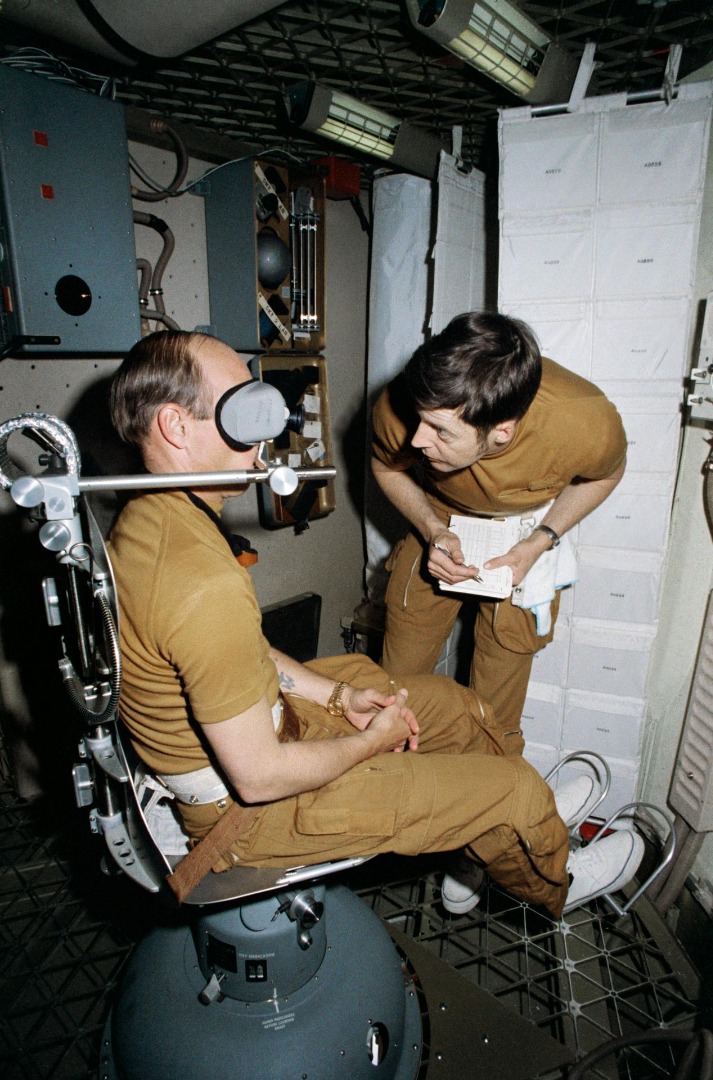 Skylab had arrived in orbit missing its micrometeoroid shield and one of its large solar panels; a second solar panel was jammed shut. While a replacement sun shield had been installed through a scientific airlock, the jammed solar wing significantly reduced the electrical power required to perform critical experiments. In June 1973, Kerwin and Skylab 2 commander Charles “Pete” Conrad undertook what was then one of the riskiest spacewalks ever completed, as the area of Skylab they were working in was essentially without handholds or restraints. Using tools provided by hardware store A.B. Chance, they freed up the stuck solar panel, which provided the much-needed power to complete Skylab missions. Thanks to Kerwin and Conrad, the Skylab program was salvaged; all three crewed Skylab were wildly successful and yielded a harvest of medical research (as well as solar physics and earth sciences research). Kerwin eventually became Johnson Space Center’s Director of Space and Life Sciences before retiring from NASA in 1987. 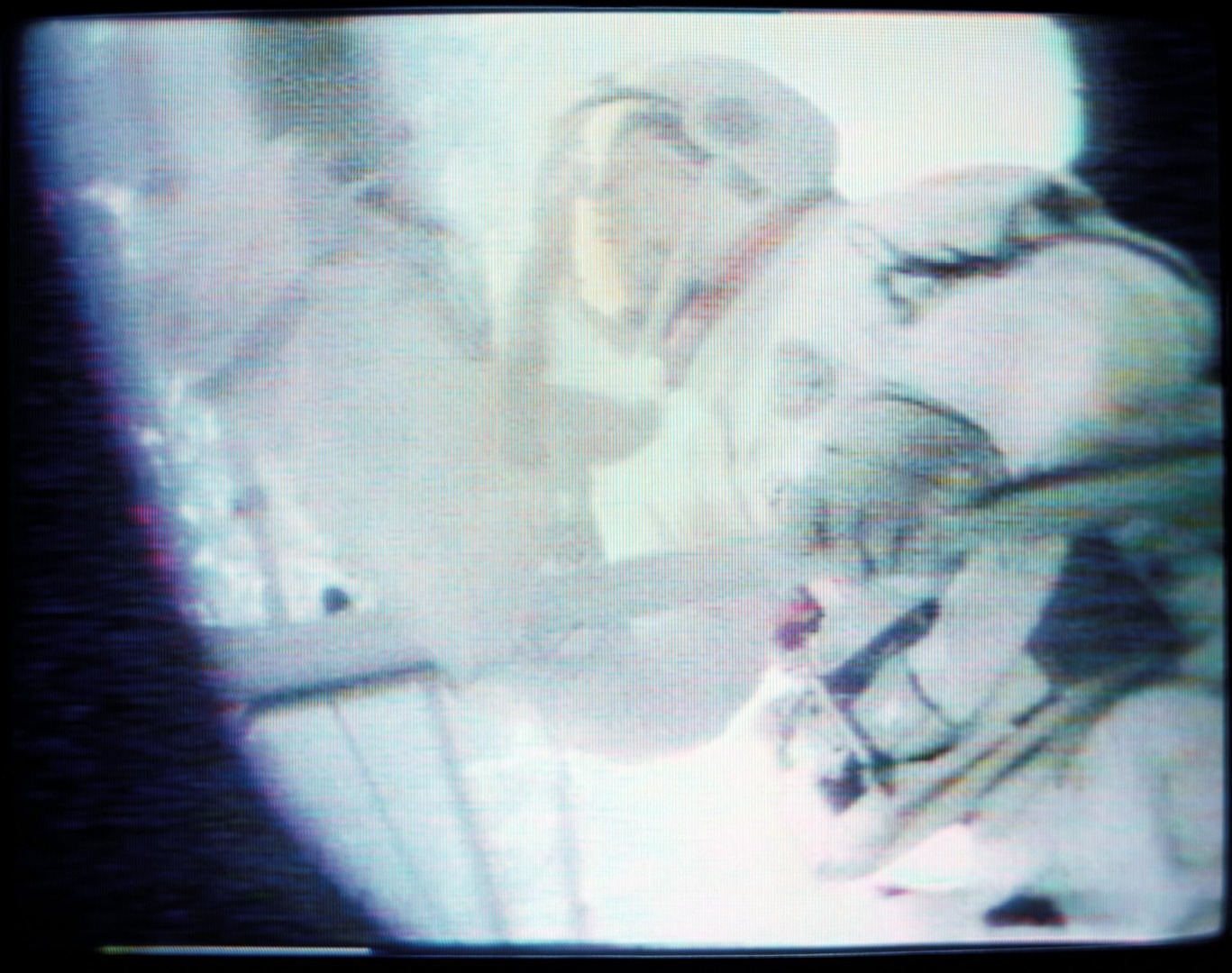 Scientist-astronaut Joseph P. Kerwin, Skylab 2 science pilot, performs extravehicular activity (EVA) at the Skylab 1 and 2 space station cluster in Earth orbit, as seen in this reproduction taken from a color television transmission made by a TV camera aboard the station. Kerwin is just outside the Airlock Module. Kerwin assisted astronaut Charles Conrad Jr., Skylab 2 commander, during the successful EVA attempt to free the stuck solar array system wing on the Orbital Workshop. 1973 NASA photo

Since Kerwin’s 28 days aboard Skylab, many medical doctors have joined NASA as astronauts and have flown aboard the Space Shuttle and International Space Station (ISS), conducting invaluable research. The first African-American woman in space, Mae Jemison, was a doctor and flew aboard STS-47 Endeavour in 1992. Story Musgrave, also a doctor, is the only astronaut to have flown aboard all five Space Shuttles and was recently inducted into the National Aviation Hall of Fame.

The Russian space program has also flown doctors and medical experts aboard its space missions. The first physician to fly in space was Boris Yegorov, who flew aboard Voskhod 1 in October 1964. From 1994 to 1995, Valeri Polyakov – an expert credentialed in space medicine – undertook the longest spaceflight in human history of 437 days on the Russian space station Mir, a record that still stands today. When he returned to Earth on March 22, 1995, he insisted on walking a short distance to show that humans could walk on Mars after a long voyage. 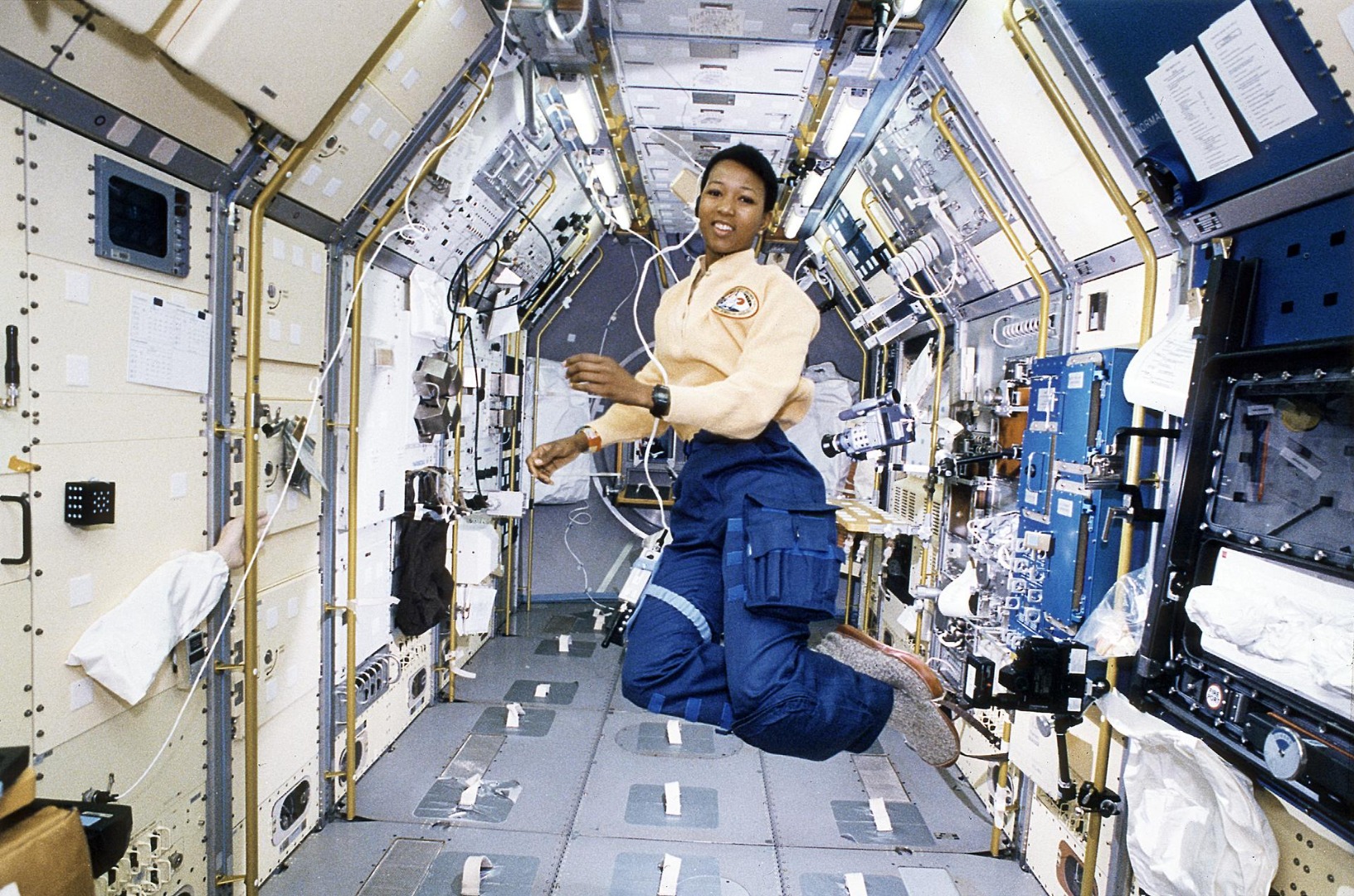 Space Benefiting Those on Earth

To make a case for spaceflight, one only needs to consider how much space has contributed to cutting-edge technologies in medicine on Earth. For decades, NASA has championed a wide array of “spinoffs” its work in space has developed and perfected. The space agency has been at the forefront of researching and developing medical innovations. Many experiments on the ISS are still ongoing and will undoubtedly yield more inventions that will help save patients on Earth.

Because a list of all of the medical innovations NASA has helped to pioneer would take several thousand more words to write, this author will provide a summary.

In the 1970s, NASA developed technologies to ease stress upon patients with acute illnesses such as immune system deficiencies and leukemia. For example, the space agency touched upon its expertise with spacesuits and developed a special suit for children with severe immune system disorders that utilized air filters to purify breathing air. This allowed them to go outside and “play,” just like children without these health issues (many were constantly isolated indoors, in ventilated enclosures). Since then, bone marrow transplants and other treatments have more effectively treated children (and adults) with severe immune system issues.

As the decade progressed, new computerized imaging technologies such as PET scans, CT scans, and MRIs were developed, allowing doctors to view patients’ internal organs with startling new clarity. Thanks to its expertise in imaging other worlds, NASA helped refine computerized image processing to make these scans more high-resolution. These scans have undoubtedly saved thousands – if not millions – worldwide.

Breast cancer is still a scourge that strikes thousands yearly; early mammography detection is critical for long-term survival. Launched in 1990, the Hubble Space Telescope ushered in a new era of sophisticated imaging that revealed new stars and galaxies thousands of light years away from Earth. Thanks to Hubble imaging, digital imaging breast biopsy systems have been developed that zero in on even minute cancer cells, allowing them to be swiftly removed and treated – prolonging survival rates.

Another innovation that NASA helped pioneer is the Left Ventricular Assist Device (LVAD). This artificial heart pump aids patients with end-stage heart failure who may be awaiting a transplant or do not qualify for a heart transplant. This device's technology drew upon the Space Shuttle's fuel pump system and was developed by renowned heart surgeon Dr. Michael DeBakey and Johnson Space Center engineers in 1995.

NASA’s medical innovations have also aided cancer patients. According to an article on the website Labmate Online, “As part of the agency’s Marshall Space Flight Center Innovative Partnerships Program, a series of successful clinical trials led to the use of light technology as a means of reducing the pain experienced by cancer patients undergoing chemotherapy and radiation treatment. Amazingly, the experiments were originally used for space shuttle plant growth research.” Yet more inventions developed on orbit have revolutionized food and water purification, eye surgeries, and even how humans on Earth have handled the COVID-19 pandemic.

A more comprehensive list of NASA’s medical and health spinoffs can be accessed via the space agency’s website.

While Dr. Leonard “Bones” McCoy may exist only in the Star Trek® universe, his influence reached far beyond television (and movie) screens. DeForest Kelley’s character inspired untold numbers of fans to pursue medicine – even space medicine. And as the decades unfolded, research kickstarted by NASA – an agency also inspired by Star Trek® – led to a revolution in medicine on Earth, developed in space. The result? Countless lives have been saved.