Grief in the context of a Life Celebration: A Glimpse into An Alternative Funeral 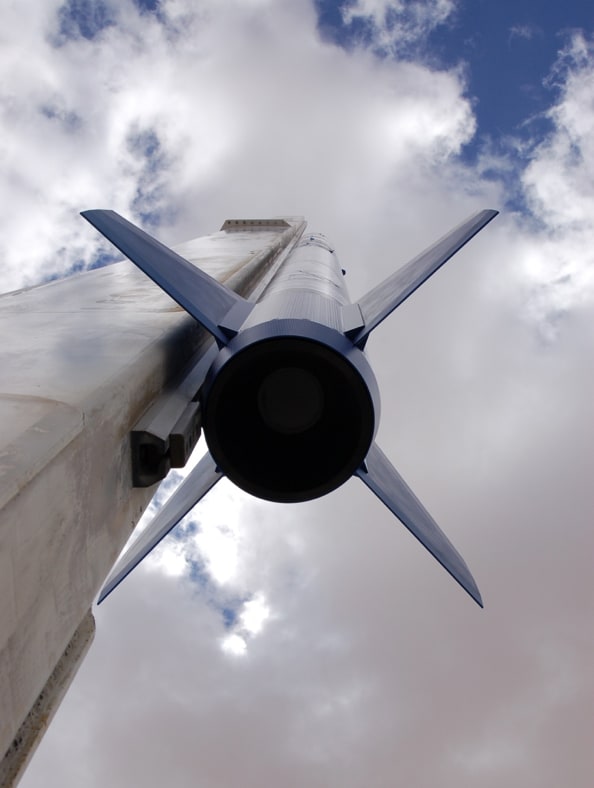 If you were somehow able to look through a window, and watch your own funeral, how would you feel if you saw people cheering and giving high-fives?

In some end of life ceremonies today, rituals have been flipped to encompass the whole gamut of emotions one might feel at a funeral: fondness and admiration for the lost one, anger caused by the loss, pleasure of convening with extended family and friends, and at times profound sadness and grief. A “life celebration” is the term now used. But what, exactly, is being celebrated? Aren’t celebrations by nature fun? Is it even appropriate to mention the word fun in conjunction with grief and funerals?

What is being celebrated is a life, not a death; the death is still fully mourned.

The life of someone who lived it fully, but whose death left a deep hurt in others leaves the living with the desire to commemorate, reflect upon, and yes, even celebrate the life. This celebration doesn’t take away the pain of the loss, but it does give a means for people to work through and express their feelings and move through grief.

At the age of 90 Mrs. Edyth Lee (Nicky to those close to her) came down with the flu but did not recover. Nicky’s children, grandchildren and great-grandchildren sorely missed her company. Still grieving a year later, a family member heard about a company called Celestis that holds events in which a person’s cremated remains are launched via rocket ship to space.  Since Nicky had chosen cremation the family considered the option for their always adventurous mother.

They knew that their grandmother, even in childhood, was fascinated by aerospace, and by a series of coincidences developed connections to space.

Growing up in Santa Rita, New Mexico she rode along with World War Two pilots as they trained. A natural adventurer, she didn’t think twice about the danger involved. She loved flying on planes and watching them cross the sky. Later on, her classmate ended up being a NASA astronaut that walked on the moon. According to her daughter, Nicky loved the idea of going to space. Had things been different for females at that time, it could have been Nicky walking the moon.

Nicky was a star-gazer, too, always looking up at the night sky. She pointed out jet contrails, which she called “sky ribbons” to her bemused family.

The family made the arrangements and traveled to the three-day event held in the New Mexico desert at a spaceport. “We went up to Spaceport America and when the rocket went up, we all oohed and aahed. The whole crowd was very excited. There was also a memorial service the night before.”

What often results at these spaceflight memorials is the equivalent of a family reunion mixed in with friends, but side-by-side with other families who seek the same significant tribute for their lost loved one. Aside from cheering and shouting, and the smoke and fire of the rocket’s liftoff, you hear people in various stages of grief reflecting on the life lost. Anyone who feels led to speak may take the podium to share precious memories, stories, and what the experience means to them, and what it would have meant to their loved one. 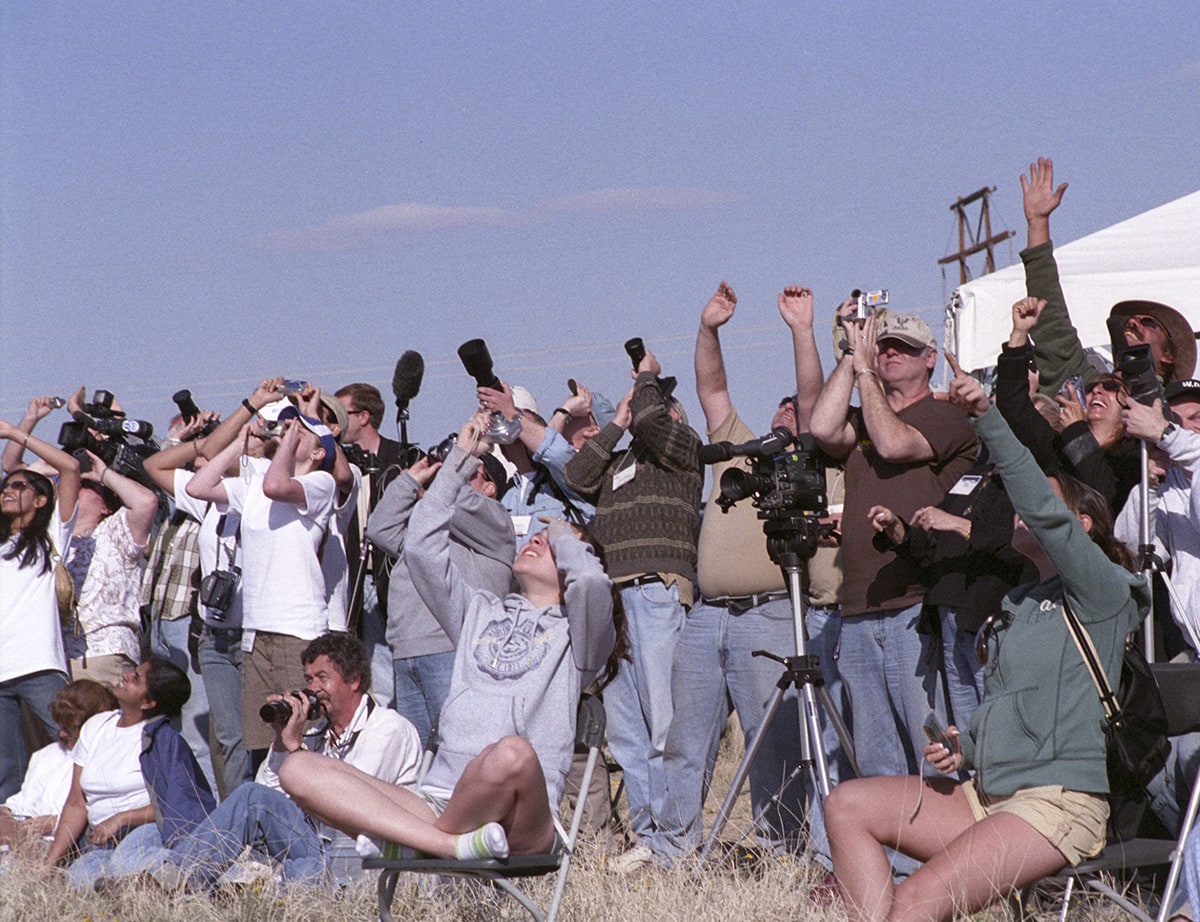 There is something about a trip to convene with friends and family that adds special, purposeful emphasis to a memorial ceremony. Breaking from one’s routine to journey to a memorial service shows its importance and significance. In contrast to the desert, other launch venues provided by Celestis include the sunny coasts of Florida and California; rockets depart from Cape Canaveral and Vandenberg Air Force Base. All locations offer optional side excursions and sight-seeing adding to the positive memories of the memorial service.

In the case of Nicky, twelve of her family members attended the October 2014 launch ceremony, and their grandmother was one of twenty-nine people whose cremated ashes were on the rocket. As family members spoke on behalf of their loved ones, it became clear that many of them had possessed a “love of everything space.” Rockets, NASA, astronauts, astronomy, flying, skydiving.

Adventure emerged as another theme.

“CJ had a HUGE personality, a 100-watt smile, a desire for all things adventurous, and a love of attention,” said the mother of the young man who passed away unexpectedly at the age of 20. Her son, C.J. Twomey loved fast cars, roller coasters and jumping out of planes.

She commented further on the spaceflight memorial in the midst of her heartbreak, “One of the few things that does make sense and what keeps me going in the wake of such tragedy is to give my larger than life son C.J. the opportunity to see the world he never saw and to forever rest in locations far beyond his wildest imagination. [This] has allowed me to keep his memory alive.”

Attendee Susan Haack joked that her late husband once asked her how much money she had in her 401K savings plan and wondered if it would be enough to pay for a trip to space on Richard Branson’s space ship. When Susan heard about Celestis on the Discovery Chanel, she said, “I just sat there and said, ‘This is perfect!  Because he always wanted to go.’”

In the case of Michelle Bonner, it was not she, but her husband Michael who discovered spaceflight memorials and made his own arrangements ahead of his death after becoming ill. Mr. Bonner’s love of space began when he was a child. He witnessed the launch of Apollo 11 in person at Kennedy Space Center, built his own homemade rockets, and created an observatory to see stars and comets. As an adult Michael routinely jumped out of airplanes and hot air balloons, practiced Judo, camped and fished, scuba-dived and traveled.

When he read about Celestis, he said to his wife, “You better get me on there. That’s what I’m doing!”

The father of Jamie Ottoway skillfully painted a picture of his talented son who was tragically killed in an accident the last day of a four-year aeronautical apprenticeship. Mr. Ottoway spent some time explaining that the family had held a prior funeral for Jamie in their hometown, and how unique it was. Instead of black, guests wore a hoodie and shorts, because that is what Jamie was fond of wearing, for example. His speech was peppered with humor as he lovingly recalled the accomplishments of Jamie. The family says, “We try to celebrate his life, more than mourn his passing and this spaceflight is exactly that, a celebration. Although we are sad that he has gone, we are happier that he was ever here at all....”

So, is this a celebration, or is it a funeral?

There are elements of both.  This particular service included a violinist, photo displays of the deceased family member, and speakers occasionally breaking up recalling their profound grief and loss, then quickly regaining composure in time to tell their stories.  But more often you heard heartwarming anecdotes and laughs, which is natural since all were grieving the loss of a person who was full of personality, character and humor. 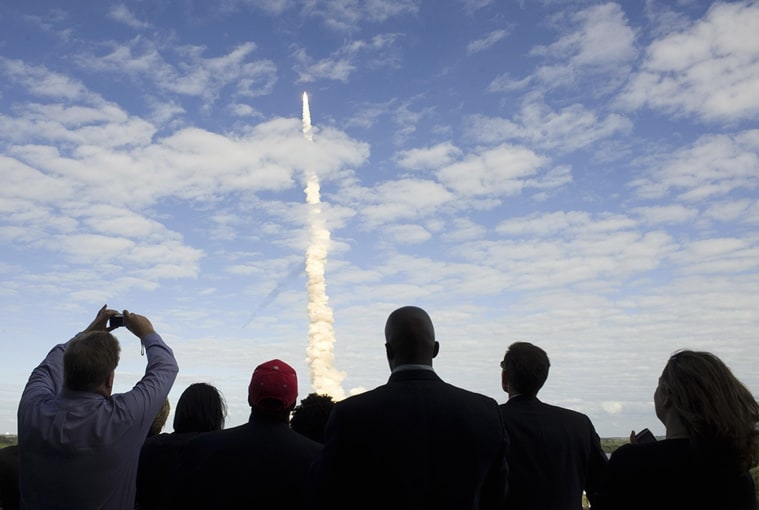 Nobody mentioned the word closure during the ceremony. In fact, most families considered the spaceflight memorial as just one of a series of tributes, rituals, ceremonies, public eulogies, and scattering of ashes. Some had traveled all over the globe to scatter ashes in meaningful places illustrating that there are no set rules or protocol today about funeral services; people are accepting the fact that they can do it their own way.

For example, speaker Karen Carney shared that she had been traveling the world to scatter her late husband’s ashes in seven places that were special to him or that had been a goal of his to visit. Since he had always joked about going to outer space, when Karen heard about Celestis she thought, “This is an omen!  I can do this as part of his bucket list!” At the time of the memorial service Karen had only one more place to take his ashes: the Ganges River.

At the end of the ceremony the attendees were briefed on what could go wrong at the launch (this uncertainty is part of the spontaneity associated with spaceflight).  There was no doubt, however, that all present and those viewing the webcast wanted a successful and timely launch. They were granted this wish. All witnessed a flawless liftoff and launch on the morning of October 24th with plenty of “sky ribbons”.