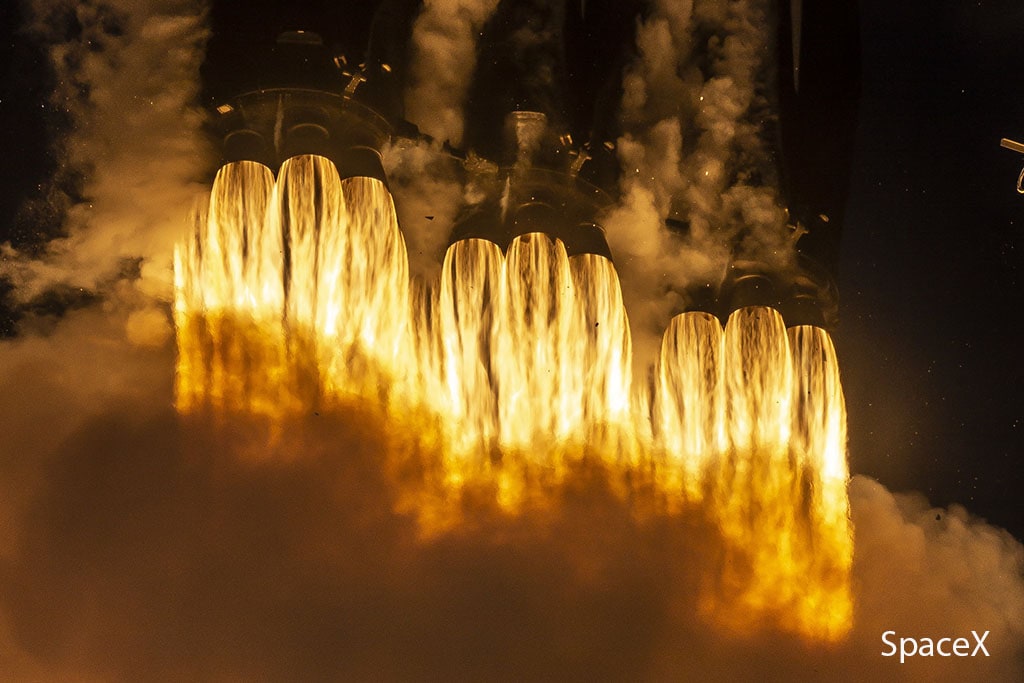 Below are select news articles about the thrilling liftoff of Celestis' 16th memorial spaceflight, the Heritage Flight. The successful launch into Earth orbit occurred on June 25, 2019 from NASA's Kennedy Space Center in Florida. The mission was flown into space on the U.S. Air Force's STP-2 mission on board a Falcon Heavy rocket carrying 24 satellites, including the General Atomics OTB satellite that hosts the Celestis Heritage Flight as it orbits Earth. 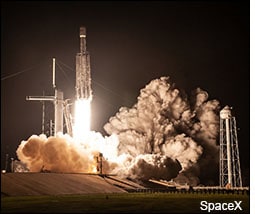 SpaceX's Falcon Heavy Deploys Dozens of Satellites to Orbit: The powerful rocket is carrying an assortment of cargo, including a solar sail, an atomic clock and the ashes of 152 people.

"The mission is called Space Test Program-2, and is a partnership between the Defense Department, NASA, the National Oceanic and Atmospheric Administration and a number of private companies. The 24 separate satellites — including an Air Force satellite for basic research as well as cremated remains of 152 people — were packed together in an integrated payload that will be gradually deployed to a variety of orbits." See Read the full article.... 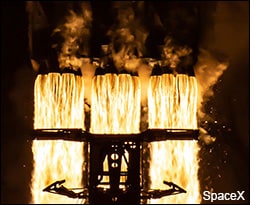 "Thrilling area residents and tourists who stayed up to catch the delayed 2:30 a.m. EDT liftoff, the rocket put on a dazzling show, lighting up the overnight sky for miles around with its 27 first stage engines belching rushing jets of flame [pictured here].

"Also on board for the STP-2 mission: small portions of the cremated remains of 152 space enthusiasts being sent into orbit by their families through Celestis Memorial Spaceflights, a company that provides launch opportunities for clients who opt for burials in space and what the firm's website describes as 'a uniquely compelling memorial experience.'" Read the full article.... 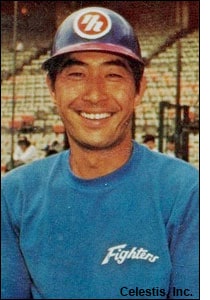 "Believe it or not, this isn't the first time that Celestis has sent human remains into space — in fact, it's not even close. The company has successfully completed 15 launches already, sending the ashes of celebrities like Star Trek 'Scotty' actor James Doohan and scientist Eugene Shoemaker into space in decades past." Read the full article.... 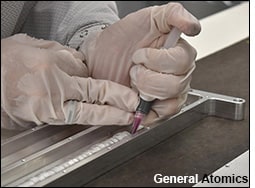 "The launch of cremated remains is facilitated by a company called Celestis Memorial Spaceflights, which purchases available room on spacecraft, installs a container, then packs it with small metal capsules filled with ashes. [Pictured here, a technician inserts Celestis capsules filled with the ashes on the Orbital Test Bed satellite.]

"Since its founding in 1994, the company has flown cremains on 15 different rockets: eight up-and-down suborbital flights, six into orbit around Earth, and one that crashed into the moon.

"Current and future 'participants' include children, space enthusiasts, scientists, engineers, astronauts, authors, and more. For example, Celestis flew some ashes of geologist and planetary scientist Eugene Shoemaker to the moon in 1998, and took the remains of 'Star Trek' actor James 'Scotty' Doohan into [space] in 2008. (Doohan's ashes also launched to the International Space Station in 2012, and even more await a future 'Enterprise' flight into deep space.)" Read the full article.... 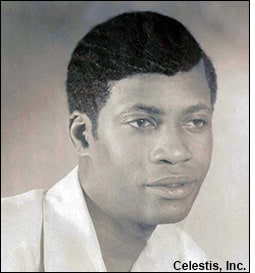 "'Star Trek' buff Sam Davis worked for the FAA and always had his head in the stars. Now, a little bit of his remains have been launched into space.

"Davis-Ingram says: 'When the rocket took off, the sky lit up like it was morning. It was very loud, a bit exciting. Everybody was just screaming.'" Read the full article.... 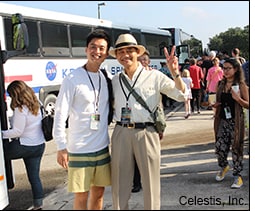 "Family and friends gathered early Tuesday morning to watch the remains of their loved ones launch into space on a SpaceX Falcon Heavy, lighting up the night sky above the Space Coast.

"The space memorial service is provided by Celestis Memorial Spaceflight.

"Family members can track the satellite online before it eventually burns up in entirety, 'sort of an ashes to ashes … blazing like a shooting star,' [Charles Chafer, the co-founder and CEO of Celestis] said.

"Family of the 'participants' on board for Tuesday's launch were invited to a three-day event that included a tour of Kennedy Space Center [see photo above], a memorial service and a dinner before watching the rocket take off." Read the full article....

"'As spaceflight turned from concept into reality, it was inevitable that Memorial Spaceflights would become an integral part of the space age,' the company says on its website. Its services range from $2,500 per sample to $12,500, depending on whether or not the ashes will descend back to Earth, stay in orbit, or escape the planet's influence altogether." Read the full article.... 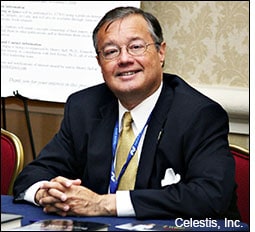 "SpaceX will also be delivering the cremated remains of 152 people. Called 'Memorial Spaceflights,' this project is being run by the private company Celestis. Notable individuals having their ashes sent into space include NASA astronaut Bill Pogue, [baseball] star Masaru Tomita, and space journalist Frank Sietzen [pictured here], as BGR reports. The container holding the ashes is expected to fall back into Earth's atmosphere after about 25 years." Read the full article....

"SpaceX may be yet to launch any living human astronauts into space, but the remains of over 150 people are going to get the ride of their afterlives on Monday night thanks to the company’s Falcon Heavy rocket. Among the various satellites and instruments being carried into orbit by SpaceX this evening is a collection of 'spaceflight memorials' by a company called Celestis.

"Celestis offers a rather unique service in that it provides a way for family members to send the remains of their loved ones into space as a tribute and memorial.

"Believe it or not, this isn't the first time that Celestis has sent human remains into space — in fact, it's not even close. The company has successfully completed 15 launches already, sending the ashes of celebrities like Star Trek 'Scotty' actor James Doohan and scientist Eugene Shoemaker into space in decades past." Read the full article.... 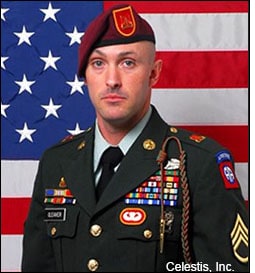 "As the rocket left the launch pad, its ascent turning the Florida skyline into temporary day, Teresa Cleaver's thoughts never strayed far from the smiling face of her only son.

"Buried deep within the rocket and sealed inside a satellite was a tiny cylinder holding a single gram of John James Cleaver's cremated remains.

"Watching the rocket and its streak of white exhaust clawing its way slowly toward orbit, Teresa Cleaver couldn't keep the smile from her face. At that moment, she felt an overwhelming sense of accomplishment. Even more so, she felt closure — something she'd been seeking since her son was killed by a suicide bomber in November 2009 in Afghanistan.

"'This was the highlight of my life,' she said of the 2:30 a.m. rocket launch June 25 from Kennedy Space Center. 'To John, I was thinking: "This is it. We have reached the top of that mountain. This is the pinnacle experience. Momma did it."'" Read the full article.... 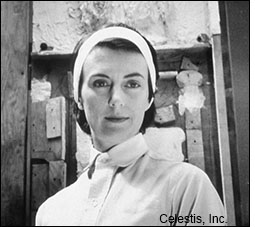 "For the 152 people whose cremated remains flew aboard Falcon Heavy Tuesday morning, a cosmic send-off was the only way to go, too.

"The remains flew to space through a service provided by private company Celestis, which offers the unique spaceflight-themed memorials. They run from $2,495 to $12,500 depending on the trajectory of the ashes, whether they return to Earth or go into Earth orbit, lunar orbit or deep space. The ashes are placed in coin-sized capsules and packed together inside the spacecraft.

"Tuesday's mission was Celestis' 16th to space, known as the 'Heritage Flight.' It sent a number of space enthusiasts into the cosmos, some well-known in the space community ― including NASA astronaut William Pogue, 'Star Trek' actor James Doohan, and planetary scientists Eugene Shoemaker and Eric De Jong ― as well as fans from other backgrounds, including sculptor and painter Luise Kaish [pictured here], a key figure in the New York art scene of the late 20th century." Read the full article.... 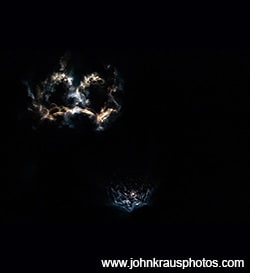 "The Falcon Heavy's three boosters drove the rocket off the pad with some 5.1 million pounds of thrust, more than any other launcher currently in service, and steered the vehicle toward the east.

"Speeding back from the edge of space, the rockets reignited their engines for a re-entry braking burn [after effects pictured here], and a final maneuver to slow for nearly simultaneous landings at Cape Canaveral.

"A pair of double sonic booms echoed across Florida’s Space Coast as the rockets returned.

"Around two-and-a-half minutes into the launch, the side boosters shut down and separated from the Falcon Heavy’s center core to begin a series of propulsive maneuvers guiding the twin rockets back to Landing Zone 1 and Landing Zone 2 at Cape Canaveral Air Force Station, around 9 miles (15 kilometers) south of pad 39A.

"The next event was the deployment of the Orbital Test Bed spacecraft built by General Atomics. The Orbital Test Bed, or OTB, mission hosts several payloads, including the Deep Space Atomic Clock experiment from NASA, which will test a new type of hyper-accurate atomic clock that could make it easier for deep space probes to navigate.

"Another package attached to the OTB satellite carries the cremated remains of 152 people, including the late astronaut Bill Pogue and space journalist and historian Frank Sietzen. The payload, called 'Heritage Flight' and arranged by Celestis, will remain in orbit with the OTB spaceraft for around 25 years." Read the full article....

Memorial spaceflights: how people are paying to have their ashes blasted into space

"... Also among the cargo of Falcon Heavy's third flight were the ashes of more than 150 people, courtesy of Celestis, a memorial flight company.

"The trend of sending a loved one's ashes into space is becoming increasingly popular and among those memorialised on the flight were Bill Pogue, an astronaut who flew on Nasa's first space station, and Masaru Tomita, a two-time all star Japanese baseball player." Read the full article.... 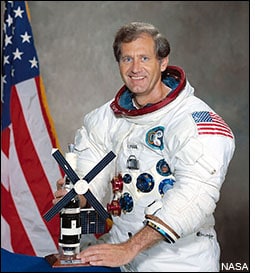 "The ashes of William 'Bill' Pogue, a former astronaut and retired Air Force colonel from Sand Springs, are aboard a satellite launched on the SpaceX Falcon Heavy rocket.

"General Atomics spokeswoman Karen Johnson said in an email that an orbital test bed satellite designed by the company that was launched on the Falcon Heavy rocket is holding the remains of about 130 people, including Pogue as part of a Celestis Memorial Spaceflight, as well as NASA’s Space Technology Mission Directorate’s Deep Space Atomic Clock, designed and built at NASA’s Jet Propulsion Laboratory to support deep space navigation and exploration; a Modular Solar Array developed for the U.S. Air Force Research Laboratory (AFRL); an Integrated Miniaturized Electrostatic Analyzer sensor payload developed by cadets at the U.S. Air Force Academy; the RadMon next generation radiation effects monitor; the FlexRX programmable satellite receiver.

"Pogue was born in 1930 in Okemah and reportedly began his 25-year career with the U.S. Air Force shortly after graduating from high school in Sand Springs. He served as a combat fighter pilot in Korea and spent two years as an aerobatic pilot with the Air Force’s Thunderbirds, according to his biography on Celestis' website." Read the full article....