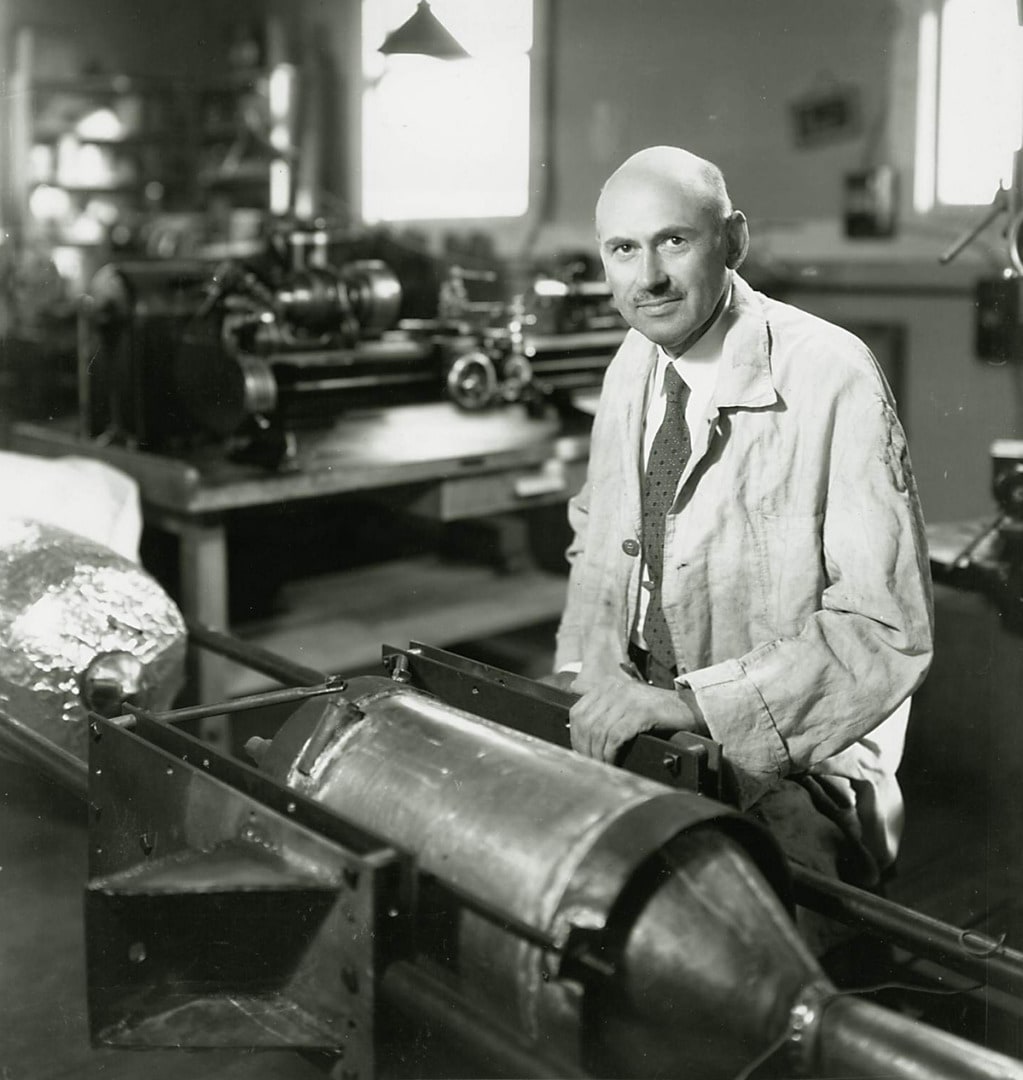 • "The horse is here to stay but the automobile is only a novelty -- a fad" said the president of the Michigan Savings Bank in 1903, advising against investing in the Ford Motor Company.
• "There is no reason anyone would want a computer in their home" said Ken Olson, president, chairman and founder of Digital Equipment Corp. (DEC) in 1977, dismissing the potential market for personal computers.
• “We don't like their sound and guitar music is on the way out” said the Decca Recording Co. when the company rejected The Beatles in 1962.

Skeptics of new ideas are often proven wrong: That was clearly confirmed with the advent of the Space Age. Decades before humans began venturing into the final frontier the New York Times published a scathing editorial criticizing the American scientist Robert Goddard for suggesting that rockets could one day propel spacecraft in the vacuum of space, making possible future trips to the Moon. The widespread public ridicule culminated in his being nicknamed “The Moon Man.” But on July 17, 1969 -- the day after Apollo 11 lifted off from the Kennedy Space Center on its historic journey to Earth’s nearest celestial neighbor -- the Times published the following retraction:

On Jan. 13, 1920, Topics of The Times, an editorial-page feature of The New York Times, dismissed the notion that a rocket could function in a vacuum and commented on the ideas of Robert H. Goddard, the rocket pioneer, as follows: ''That Professor Goddard, with his 'chair' in Clark College and the countenancing of the Smithsonian Institution, does not know the relation of action to reaction, and of the need to have something better than a vacuum against which to react -- to say that would be absurd. Of course he only seems to lack the knowledge ladled out daily in high schools.''

Further investigation and experimentation have confirmed the findings of Isaac Newton in the 17th century and it is now definitely established that a rocket can function in a vacuum as well as in an atmosphere. The Times regrets the error.

Today Goddard is considered to be the father of modern rocket propulsion. NASA Goddard Space Flight Center, founded in 1959, is named in his honor. In that same year Congress posthumously awarded him a Congressional Gold Medal for his lifetime achievement. A crater on the Moon is named "Goddard Crater." And Celestis named its tenth memorial spaceflight after Dr. Goddard, who conducted much of his most significant research near what is now Spaceport America, New Mexico – the launch site for Celestis Earth Rise Service missions. 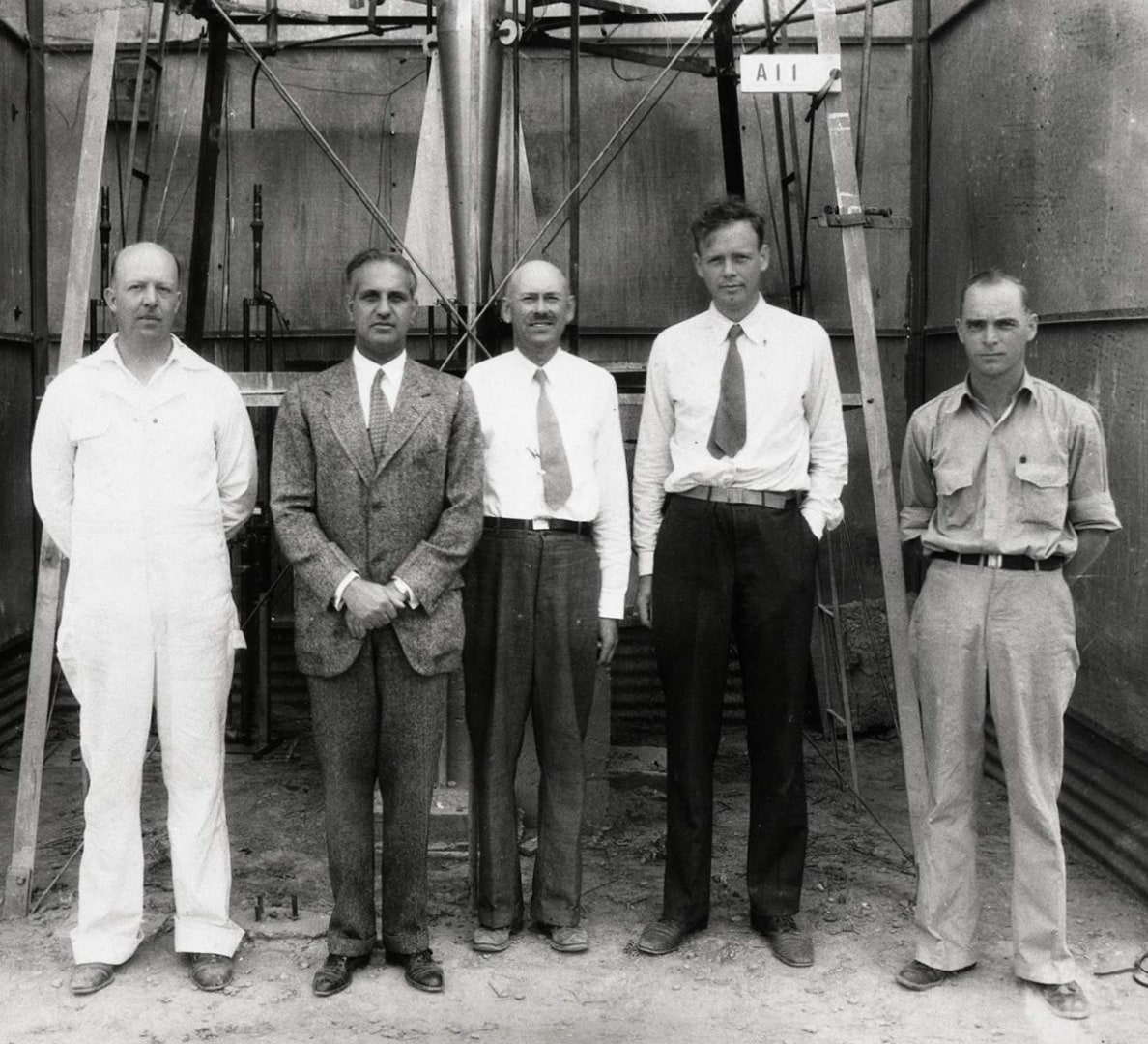 Standing in front of the rocket in the launch tower near Roswell, New Mexico on September 23, 1935, are (left to right): Albert Kisk, Goddard’s brother-in-law and machinist; Harry F. Guggenheim; Dr. Robert H. Goddard; Col. Charles A. Lindbergh and N.T. Ljungquist, machinist. Charles Lindbergh, an advocate for Goddard and his research, helped secure a grant from the Daniel and Florence Guggenheim Foundation in 1930. With that money Goddard and his wife moved to Roswell, New Mexico, where he could conduct research and launch rockets while avoiding the scrutiny and criticism of his colleagues and the press. Photo Credit: NASA

Born October 5, 1882 in Worcester, Massachusetts, Goddard developed his interest in space and astronomy at an early age, inspired in part by H.G. Wells’ sci-fi classic, War of the Worlds, and by his parents, who provided young Robert a telescope and otherwise encouraged him to pursue a scientific career.  Goddard studied at Worcester Polytechnic Institute and Clark University, earning his Ph.D. in 1911. In 1914, Goddard received two U.S. patents. One was for a rocket using liquid fuel. The other was for a two or three stage rocket using solid fuel. Note that Celestis' Goddard Flight carried the ashes of Earth Rise service participants into space on board a solid fuel rocket.

At his own expense, Goddard began to make systematic studies about propulsion provided by various types of gunpowder. His classic document was a study he wrote in 1916 requesting funds from the Smithsonian Institution so that he could continue his research. This was later published along with his subsequent research in a famous January 1920 report to the Smithsonian Institution entitled “A Method of Reaching Extreme Altitudes.”  In this treatise, Goddard detailed his search for methods of raising weather recording instruments higher than sounding balloons. In this search, he developed the mathematical theories of rocket propulsion.

By 1926, Goddard had constructed and successfully launched the first rocket using liquid fuel. Indeed, the flight of Goddard’s rocket on March 16, 1926, at Auburn, Massachusetts was as significant to history as that of the Wright brothers at Kitty Hawk. 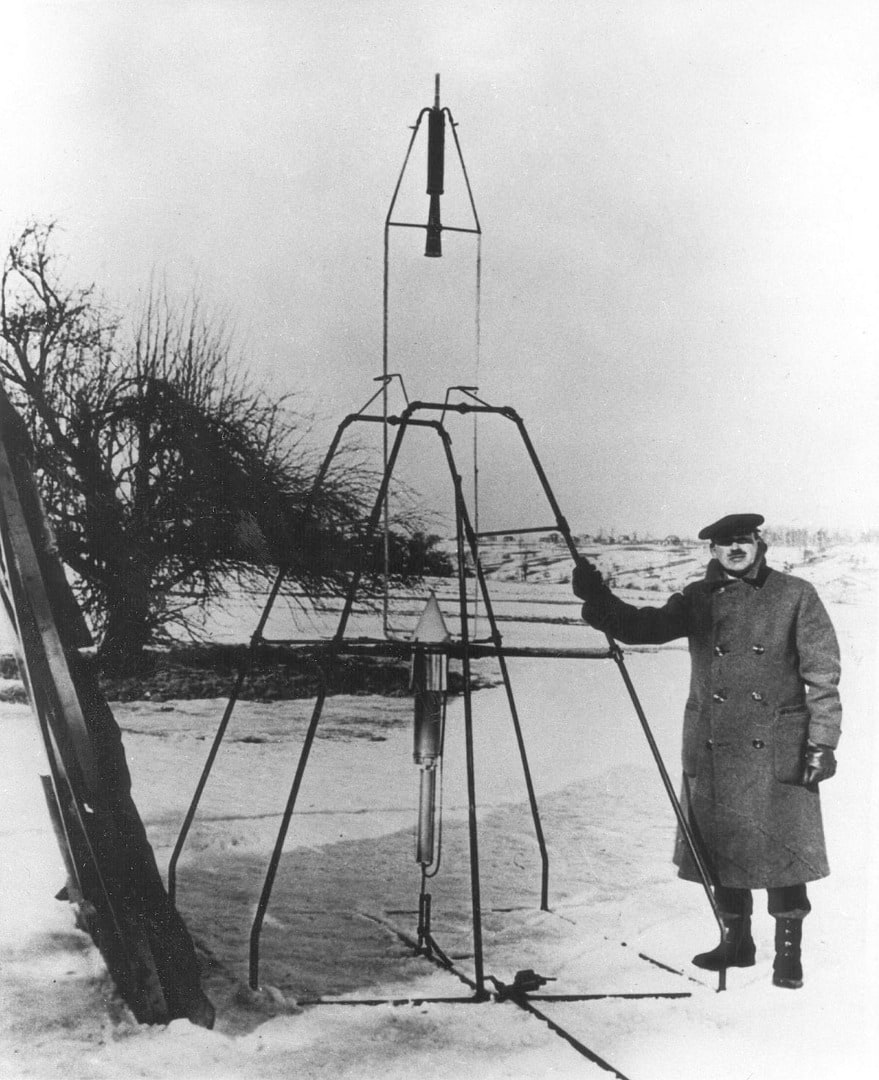 Dr. Robert Goddard and his liquid oxygen-gasoline rocket in the frame from which it was fired on March 16, 1926, at Auburn, Massachusetts.

Goddard’s greatest engineering contributions were made during his work in the 1920s and 1930s. He received a total of $10,000 from the Smithsonian by 1927, and through the personal efforts of famed American aviator Charles A. Lindbergh, he subsequently received financial support from the Daniel and Florence Guggenheim Foundation, which financed his research in New Mexico.  Goddard spent a dozen years near Roswell, New Mexico with the support of the Guggenheim Foundation, further developing and testing his rocket designs.

Robert Goddard’s contributions to missilery and spaceflight would make a lengthy list.  Here are some of Dr. Goddard’s firsts:

• Explored the practicality of using rocket propulsion to reach high altitudes and even the moon (1912)
• Proved that a rocket will work in a vacuum, that it needs no air to push against
• Developed and demonstrated the basic idea of the “bazooka” two days before the Armistice in 1918 at the Aberdeen Proving Ground in Maryland.
• Developed and launched a liquid fuel rocket (March 16, 1926, Auburn, Mass.)
• Launched a scientific payload in a rocket flight (1929, Auburn, Mass.)
• Used vanes in rocket motor blast for guidance (1932, New Mexico)
• Developed a gyro control apparatus for rocket flight (1932, New Mexico)
• Received U.S. patent in idea of multi-stage rocket (1914)
• Developed pumps suitable for rocket fuels
• Launched a rocket with a motor pivoted on gimbals under the influence of a gyro

Goddard was a true space pioneer -- misunderstood and underappreciated through much of his lifetime. Celestis salutes this genius whose groundbreaking work laid the foundation for the Space Age.