A Brief Overview of the New Mexico Space Trail 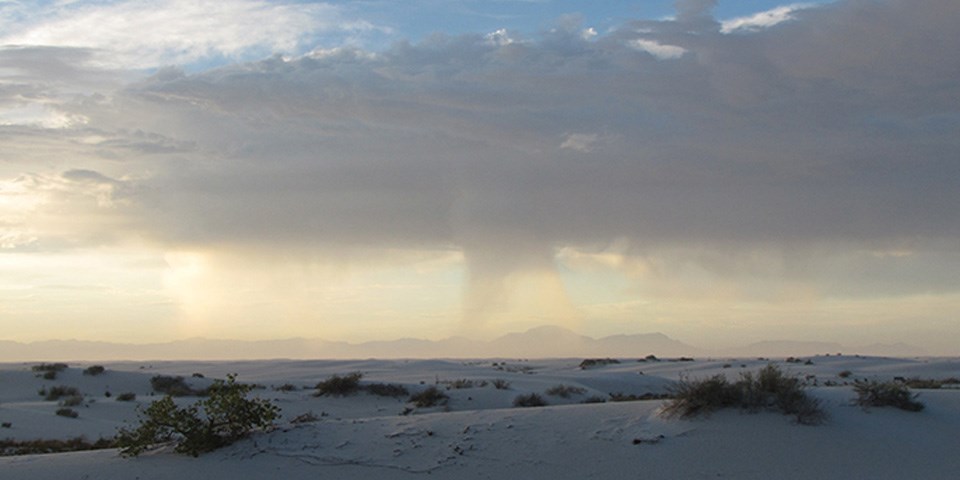 When many think of spaceports, aerospace engineering, astronomy, and launch pads, they usually think of the NASA centers sprinkled around the United States, such as Kennedy Space Center, Johnson Space Center, and Goddard Space Flight Center, to name a few. But few states have a spaceflight history as rich as New Mexico. On November 30th, Celestis Memorial Spaceflights will add another milestone to New Mexico’s impressive roster of space achievements with its Aurora Flight from Spaceport America near Las Cruces, which will be Celestis’ ninth Earth Rise Service from “the Land of Enchantment.”

New Mexico was the home of early astronaut testing and the high-altitude balloon tests originating from Holloman Air Force Base; the state’s White Sands Missile Range and Spaceport America both have a long heritage in military and commercial spaceflight. Moreover, New Mexico’s heritage in combining science and spaceflight reaches back to long before rockets even reached space and encompasses Robert Goddard, early missiles and rocketry, atomic testing, NASA’s Apollo program, and the Space Shuttle Program. 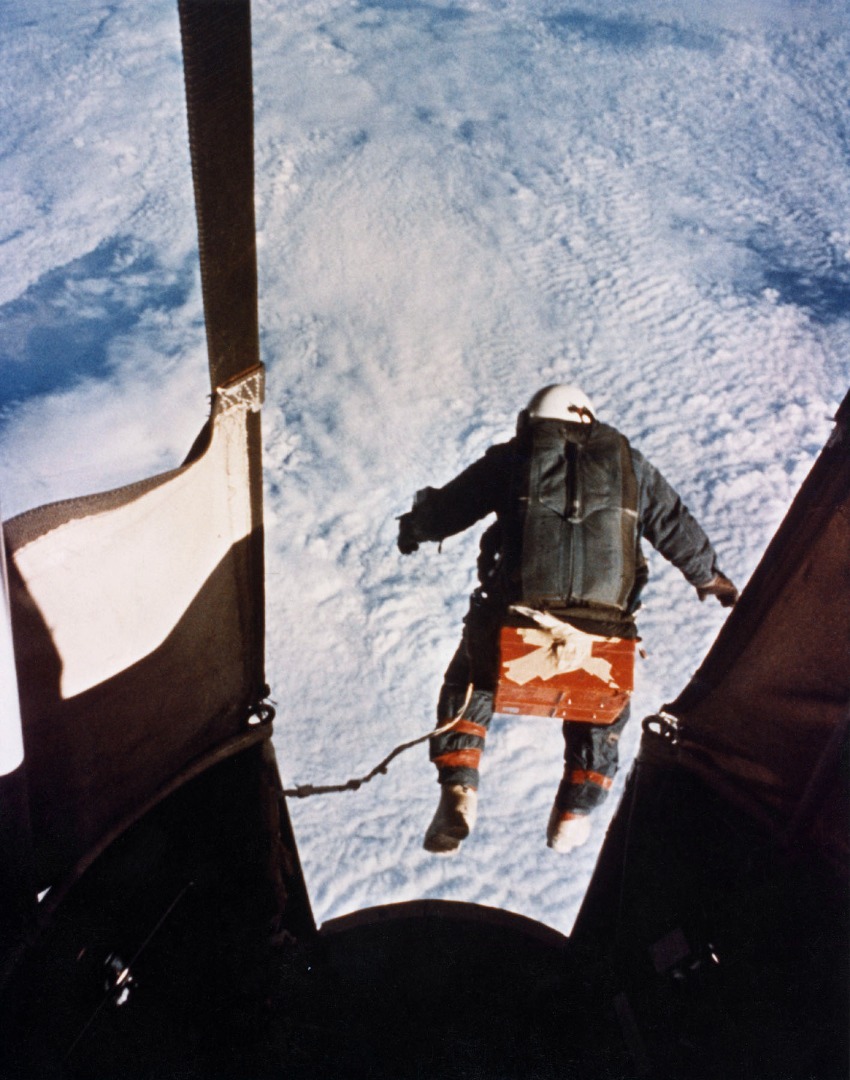 On August 16th, 1960, Air Force Colonel Joseph Kittinger set a world record for the highest skydive at 102,800 feet in altitude. Excelsior III was launched from an abandoned airstrip near Tularosa, New Mexico. Photo credit: National Museum of the Air Force

The New Mexico Space Trail was created to celebrate and commemorate 52 historic sites that encompass spaceflight’s past, present, and future. From alleged UFO crash sites to observatories to launch pads to geological sites utilized to train Apollo astronauts, New Mexico has no shortage of venues to thrill both dedicated space enthusiasts and those who are just learning about spaceflight.

Why Was the New Mexico Space Trail Established?

According to the lushly illustrated Images of America: New Mexico Space Trail book by space historian Joseph T. Page II, the New Mexico Space Trail’s seeds were sown by the state’s tradition of using highway historic markers, which started during the 1930s. Page wrote, “In the intervening decades, the Highway Historic Trail grew to over 300 signs around the state, and it is viewed by millions of highway travelers per year. On one of these highways, New Mexico Museum of Space History curator George House passed by a historical marker and asked, ‘There are no space-related historical markers anywhere in the state. Why not combine the two and have a space trail?’”

House pursued his idea and began developing maps of his vision of such a trail, aided by his museum's research and marketing team. According to Page, “In 2010, working with the Museum, New Mexico representative Dennis Kintigh (R-Roswell) introduced a memorial bill designating the trail, completing a task that had been compiled over the span of two decades.”

The New Mexico Museum of Space History describes the trail as “the frontier of adventure and discovery with museums, archeological sites, a spaceport, laboratories, and more. Each unique and amazing site helps tell the story of New Mexico’s contribution to space and technology, from ancient times to the facilities of tomorrow.” The museum’s website provides a map of the Space Trail and descriptions of each historic site. While this article cannot review all 52 locations due to length constraints, it will describe a few of the most popular attractions.

The New Mexico Museum of Space History, located in Alamogordo, encourages its visitors to “discover the cradle of America’s space program.” Its exhibits and events include tours of the Trinity Atomic Bomb site, Living and Working in Space, Looking Out, Looking Back, Space Science and New Mexico, Icons of Exploration / Tularosa Basin Overlook, the “Daisy Track” and X-37, the John P. Stapp Air & Space Park, the International Space Hall of Fame, and, of course, rockets. A reception was held at this museum for Celestis’ first launch from Spaceport America. 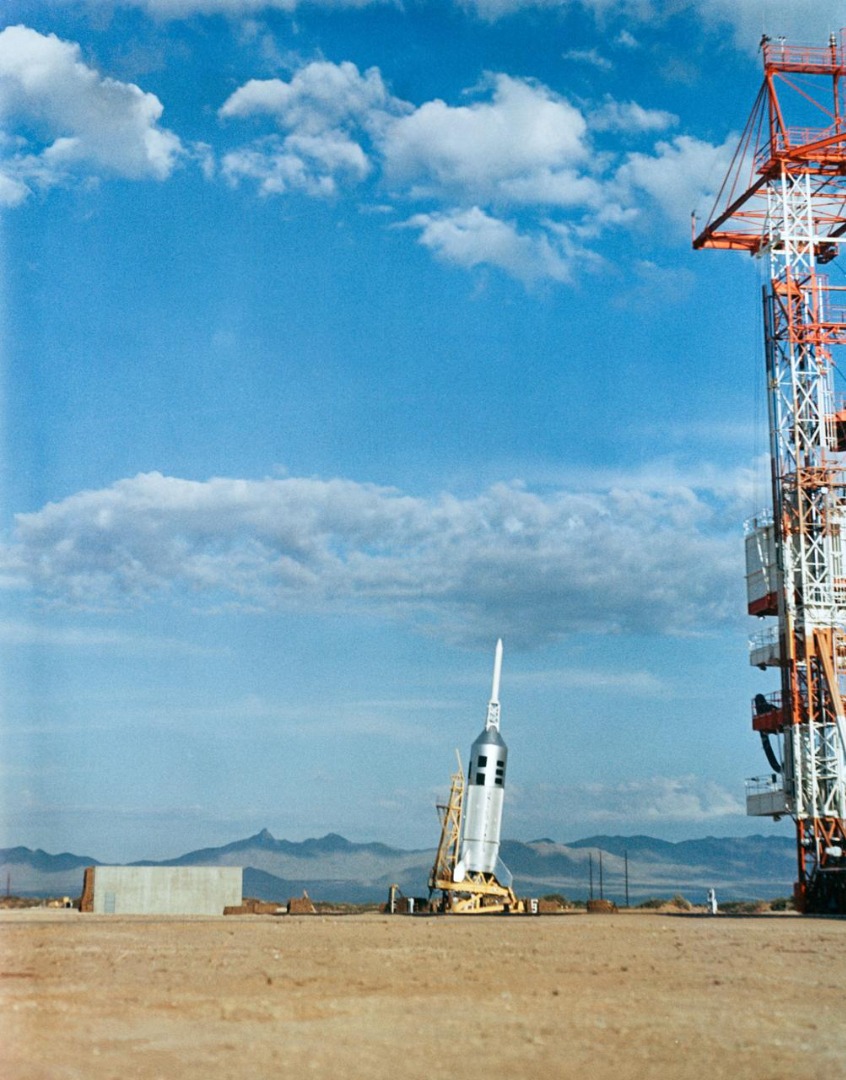 White Sands Missile Range Museum is expected to reopen to visitors in September 2022 with a new exhibit. This museum showcases rockets dating back to the earliest days of space technology, such as the V-2, Redstone, and Athena missiles. The museum’s website also has an incredible archive of historical articles for budding space historians. In addition, while Celestis’ Earth Rise Services launch from Spaceport America, the flight capsules land – by parachute – at White Sands Missile Range (WSMR) for recovery and return.

In 1982, WSMR was also in the news for becoming part of Space Shuttle history. On March 30th, 1982, Space Shuttle Columbia, upon completion of its third test flight, landed at WSMR’s Northrup Strip. This was the only time the White Sands landing site was utilized during the Space Shuttle program. This landing strip was a third option if both primary landing sites (Edwards Air Force Base in California and Kennedy Space Center in Florida) were unavailable. 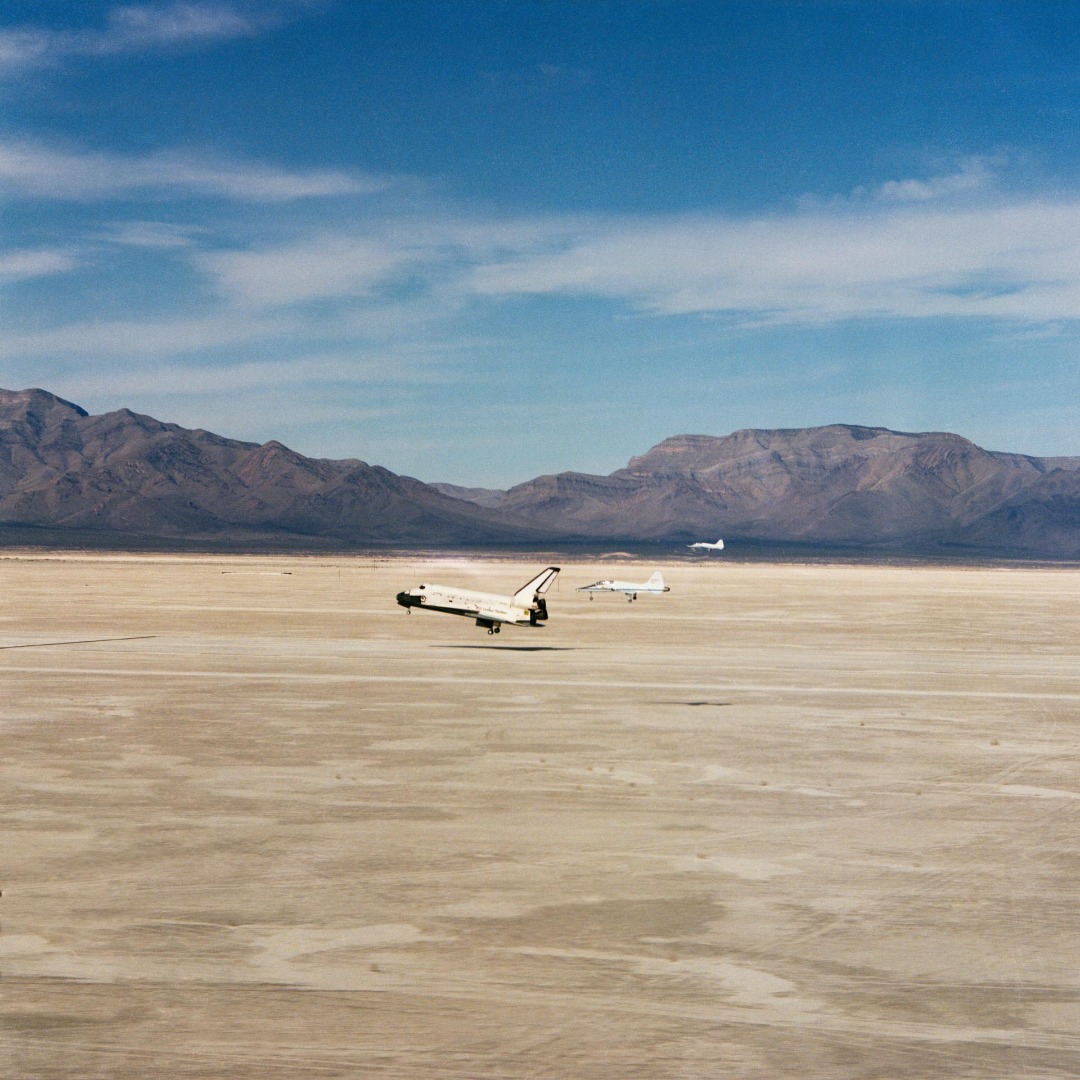 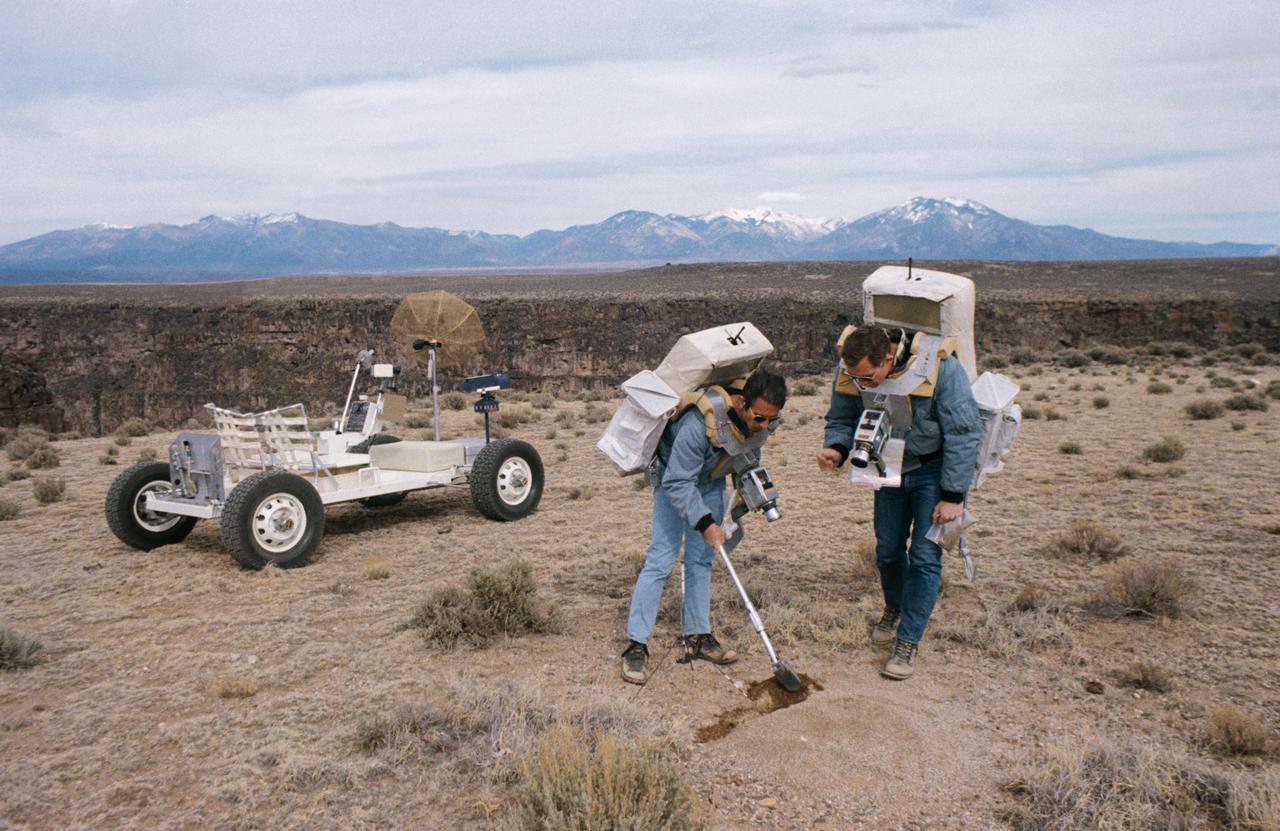 "A wide-angle view showing two members of the prime crew of the Apollo 15 lunar landing mission riding in a Lunar Roving Vehicle trainer called 'Grover' during a simulation of lunar surface extravehicular activity in the Taos, New Mexico area. They are astronauts David R. Scott (riding in left side seat), commander; and James B. Irwin, lunar module pilot." 1971 NASA photo 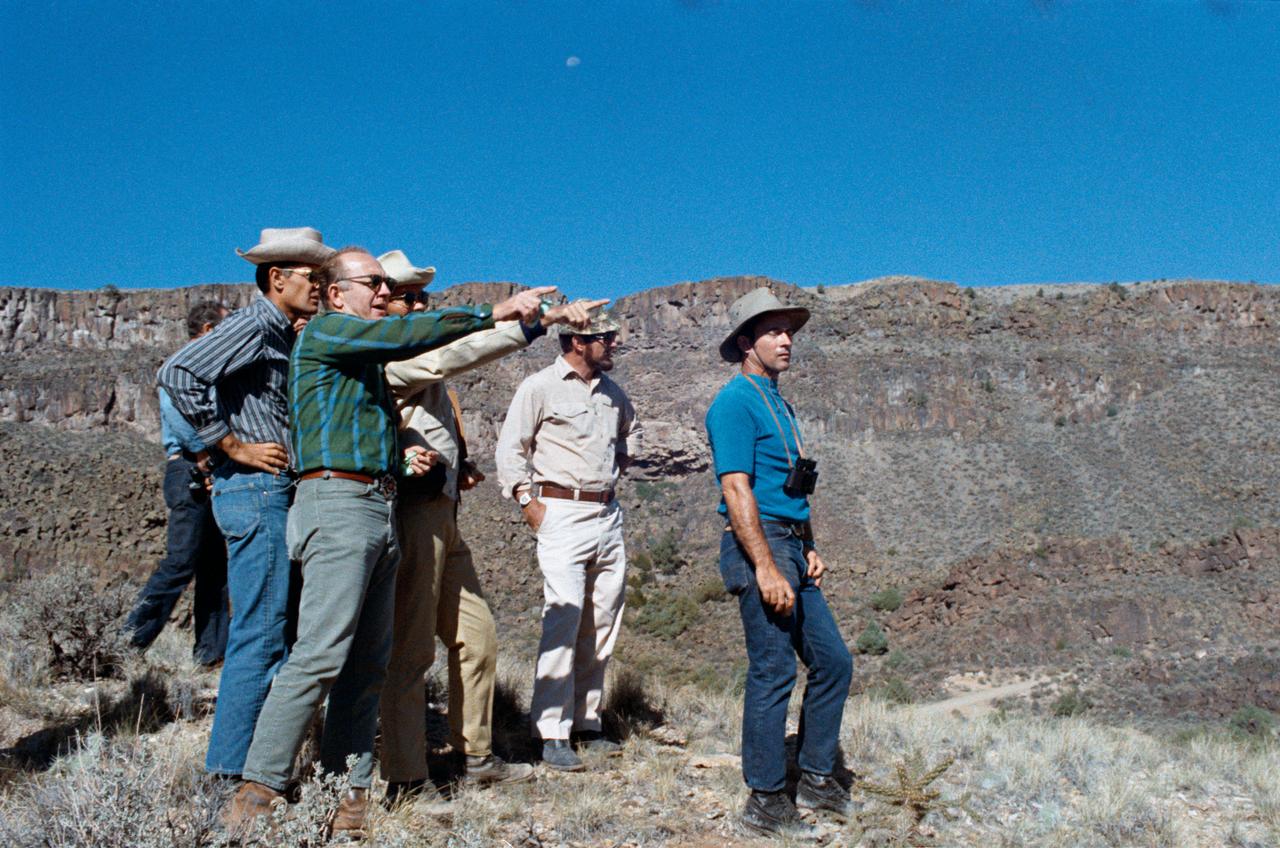 The Very Large Array Radio Telescope Facility (VLA) is famous thanks partly to its presence in the film adaptation of Carl Sagan’s Contact, which stars actress Jodie Foster. According to a previous Celestis blog, this facility “is a set of 82-foot diameter radio telescopes that, together, constitute the most advanced radio telescope array on Earth. Astronomers use the VLA to study quasars, pulsars, supernovas, black holes, and the Milky Way and other galaxies. The facility is located about a two-hour drive from Albuquerque, 50 miles west of Socorro." While the VLA facility is currently closed to the public, its online store is open.

Last but certainly not least, while not officially part of the New Mexico Space Trail, White Sands National Park is a must-see thanks to exquisite views of the world’s largest gypsum dune field, a desert of pristine white sand – all 275 square miles of it. The park’s tagline more than appropriately describes it: “Like No Place Else on Earth.”

Some of this article is excerpted from a previous Celestis blog, Touring the New Mexico Space Trail. As the Aurora Flight launch date draws closer, Celestis will provide updates on many of the sites listed here for those interested in visiting them.