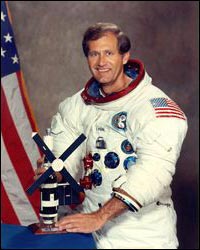 Bill's 25-year military career included a combat tour in Korea, two years as an aerobatic pilot with the U.S. Air Force Thunderbirds, a tour as an assistant professor of mathematics at the Air Force Academy, and an exchange assignment as a test pilot with the Royal Air Force. During his career he flew over 50 types and models of American, British and Czech aircraft.

He was selected in the fifth group of astronauts in 1966 and was on the support crews for Apollos 7, 11 and 14. Bill's 84-day spaceflight aboard the Skylab space station ('73-'74) with astronauts Jerry Carr and Ed Gibson set eight endurance and distance records. He made two space walks (one for a new record of over seven hours) and conducted numerous experiments related to studies of the Earth, the Sun and the long-term effects of zero gravity on crew members.

In its obituary for Bill, PBS wrote:

William Pogue was an astronaut whose openness and candor subverted the traditional image of the stoic NASA hero. Pogue favored a regular-guy approach.... Pogue also spoke openly about the less glamorous realities of space travel, and wrote a children’s book entitled “How Do You Go To the Bathroom in Space?” His down-to-earth demeanor caused one writer to deem him “the earthiest of all the astronauts.”

Bill left NASA in 1977 and then worked as an independent technical contractor for several aerospace and energy firms. From 1984 to 1998 he provided contract technical support to the Boeing Company for the Space Station Freedom program that later (1992) evolved into the International Space Station project.

In October 1997 Bill was inducted into the U.S. Astronaut Hall of Fame at Titusville, Florida.

He enjoyed running and playing paddleball and handball, and his hobbies included gardening and cabinet making. He was married and had three children. His family looks forward to his final flight among the stars aboard the next Celestis Earth Orbit memorial spaceflight.

Oh! I have slipped the surly bonds of Earth
And danced the skies on laughter-silvered wings;
Sunward I’ve climbed, and joined the tumbling mirth
Of sun-split clouds — and done a hundred things
You have not dreamed of — wheeled and soared and swung
High in the sunlit silence. Hov’ring there,
I’ve chased the shouting wind along, and flung
My eager craft through footless halls of air.
Up, up the long, delirious, burning blue
I’ve topped the wind-swept heights with easy grace.
Where never lark, or even eagle flew —
And, while with silent, lifting mind I've trod
The high untrespassed sanctity of space,
Put out my hand, and touched the face of God.