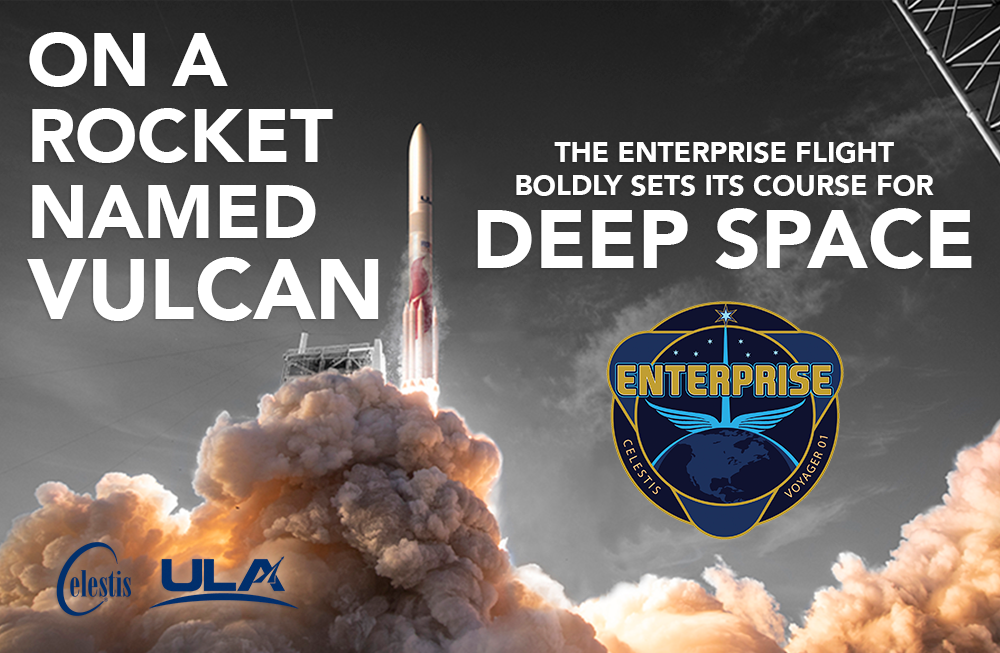 HOUSTON, TEXAS | JANUARY 26, 2022 - Celestis, Inc. announced today that it has entered into a launch services agreement with United Launch Alliance (ULA) of Centennial, CO. ULA will host a Celestis Memorial Spaceflight payload aboard the initial flight of ULA’s Vulcan Centaur, planned for later this year. Known as the Enterprise Flight (celestis.com/launch-schedule/enterprise-flight), the Celestis mission will launch more than 150 flight capsules containing cremated remains (ashes), DNA samples, and messages of greetings from clients worldwide on an endless journey in interplanetary space.

“We’re very pleased to be fulfilling, with this mission, a promise I made to Majel Barrett Roddenberry in 1997 that one day we would fly her and husband Star Trek creator Gene Roddenberry together on a deep space memorial spaceflight,” said Celestis Co-Founder and CEO Charles M. Chafer. “The mission is named Enterprise in tribute to them - and also fellow mission participant and beloved actor, James “Scotty” Doohan - as well as the many Star Trek fans who are joining them on this, the 20th Celestis Memorial Spaceflight. We look forward to launching this historic mission on a rocket named Vulcan.”

“We are honored that Celestis has selected ULA to launch this important mission,” said Tory Bruno, ULA president and CEO. “What a fitting tribute to the Roddenberry family and the Star Trek fans to be a part of the maiden flight of Vulcan, our next-generation rocket.”

Vulcan Centaur’s maiden flight will showcase its tremendous performance as it enters service with a high-energy interplanetary mission. Vulcan will first put Astrobotic’s Peregrine lunar lander on a trajectory for its rendezvous with the Moon. The Centaur upper stage will then continue on to deep space, entering a stable orbit around the sun, with Celestis’ Memorial Spaceflight Payload.

“ULA has a deep history with launching critical missions in support of national defense for our nation, so we are deeply humbled that many veterans also will be flying on this mission,” said Bruno. “It is an amazing recognition of their service and sacrifice to our country from their loved ones.”

Celestis, Inc. is the pioneer and iconic global provider of Memorial Spaceflight Services for those seeking to celebrate a life or the life of a loved one with a uniquely compelling memorial experience. Celestis missions offer four unique destinations: reaching into suborbital space, Earth’s orbit, the Moon’s surface, and now - with the Enterprise Flight - to interplanetary space. Celestis services are available through our online portal www.celestis.com and via a network of more than 3,000 funeral service providers worldwide. Reservations remain open for the Enterprise Flight and other Celestis missions.

Since its first mission – the 1997 Founders Flight – and through 16 subsequent missions to date, Celestis has been recognized by nearly every prominent member of the global media, by distinguished organizations, including the National Space Society and the Space Frontier Foundation, and most importantly by its clients from all walks of life – from astronauts to truck drivers - as a leader in both the commercial space industry and among emergent alternative funeral services providers.

Every Celestis mission brings families together from around the world to witness the launch of their loved ones on a final mission of purpose. We will conduct a multi-day set of mission-related events for the Enterprise Flight, culminating with viewing the launch from Cape Canaveral, Florida.

With more than a century of combined heritage, ULA is the nation’s most experienced and reliable launch service provider. ULA has successfully delivered more than 145 missions to orbit that aid meteorologists in tracking severe weather, unlock the mysteries of our solar system, provide critical capabilities for troops in the field, deliver cutting-edge commercial services, and enable GPS navigation.

For more information on ULA, visit the ULA website at www.ulalaunch.com, or call the ULA Launch Hotline at 1-877-ULA-4321 (852-4321).
Join the conversation at facebook.com/ulalaunch, twitter.com/ulalaunch, and instagram.com/ulalaunch.