Celestis is pleased to announce the launch of our eleventh memorial spaceflight, The New Frontier Flight, a mission dedicated to the pioneering spirit of yesterday, today and tomorrow.

About The New Frontier Flight

Read about the participants aboard the New Frontier Flight.

About the New Frontier Flight

The Celestis New Frontier Flight was launched aboard a Falcon 9 rocket with a primary payload of a Dragon Capsule loaded with supplies to deliver to the International Space Station - the first ever commercial delivery to the ISS.

Liftoff occurred at 2:44 am CDT, Tuesday, May 22, 2012 from Cape Canaveral, Florida.  Aboard were 320 Celestis participants – the largest Celestis mission ever – from the United States, Canada, Germany, the United Kingdom, China, India, Taiwan, Japan, Australia, the Netherlands, France, South Africa and Russia.

The New Frontier Flight is dedicated to three souls, one aboard, who passed away prior to seeing this mission completed but who contributed so much to Celestis and the dream of space for all of us:  David Hannah, Jr., Susan Schonfeld, and Jim Rogan (participant).

ABC News article about this launch

Hundreds of friends and family members gathered to celebrate the lives of the 320 participants on board the New Frontier Flight.

Falcon 9 rocket launch - the first ever commercial delivery to the ISS.

Memorial Service
As the bay doors open [I said] "My God, I am over Australia!" I had to stop, get a deep breath, and felt that my heart is going to jump up out of my chest when I got that first glimpse of Earth. I think this is what you folks are going to feel." Astronaut Jon A. McBride (ret.) speaking at the New Frontier Flight memorial service. 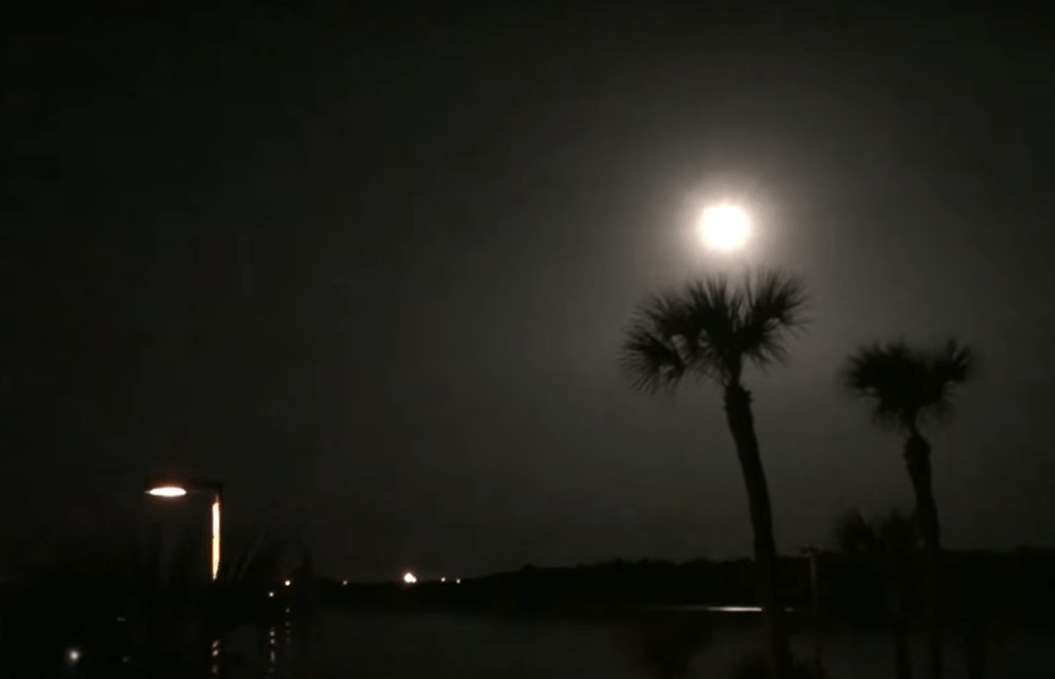 ABOARD THE NEW FRONTIER FLIGHT

"We are pleased the sky is no longer the limit for Shawn. And when he comes down, he'll be a shooting star"
Pat and Kathy Meehan, parents of Shawn Meehan
"He always spoke of being sent into space after his death, and I want to honor his request."
Alyson Rod, wife of Dr. Samuel Rod
"I just received the DVD of the New Frontier Flight. It was beautiful and brought me to tears! Not only was the first part of the launch at night beautiful but the dedication to all the 'astronauts' that took their final voyage was inspiring! So many wonderful sendoffs for so many different people from all walks of life. I felt like I was actually there with everyone. Just beautiful!"
Patrick Dirlam, father of Jeffrey Dirlam
"His request in the event of his death was that his remains be cremated and his ashes scattered into the winds from the highest peak his wife and kids could climb. Through Celestis Memorial Spaceflight service, a rocket - traveling faster than any wind on Earth - will climb into Earth orbit, higher than any peak on this planet. It will be through this memorial spaceflight that his dream of going into outer space will finally be fulfilled!"
The family of Roberto Sato
"He was also a proud man who tried to live his dream until the dream was all that was left to him. He held inside of himself a spark and a vision that he passed on to his children. In the grand cosmic scheme of things he was an ordinary man who dreamed of a greater life. And that life was to be lived among the stars!....Thanks to Celestis, we can now, a decade after his passing, honor his wish and fulfill his life-long dream by sending him to the stars that were always his real home."
The family of Klaus Sachse
"Scott was a fan of Star Trek from its very beginning. He liked Spock and his "logic" speeches. We, his family, believe that Scott will finally realize his dream of going into space. We are grateful for the services of Celestis, Inc."
Family of Scott Roach
"It is an honor to be able to fulfill his last wishes of being a part of the space that he so loved. He will forever now be looking over all of us."
Family of Mark Allen Rivers
"We continued to watch breathlessly as our loved ones began their journey into space. Some cried, others high-fived or hugged. I didn’t cry as I expected, but instead a big smile crossed my face just as it had Steve’s when he learned that he would be ‘born anew as an astronaut.’ I simply threw one arm skyward and shouted, ‘Ad Astra, Steve.’"
Vicki Julian, wife of Steve Julian
Watch More Videos 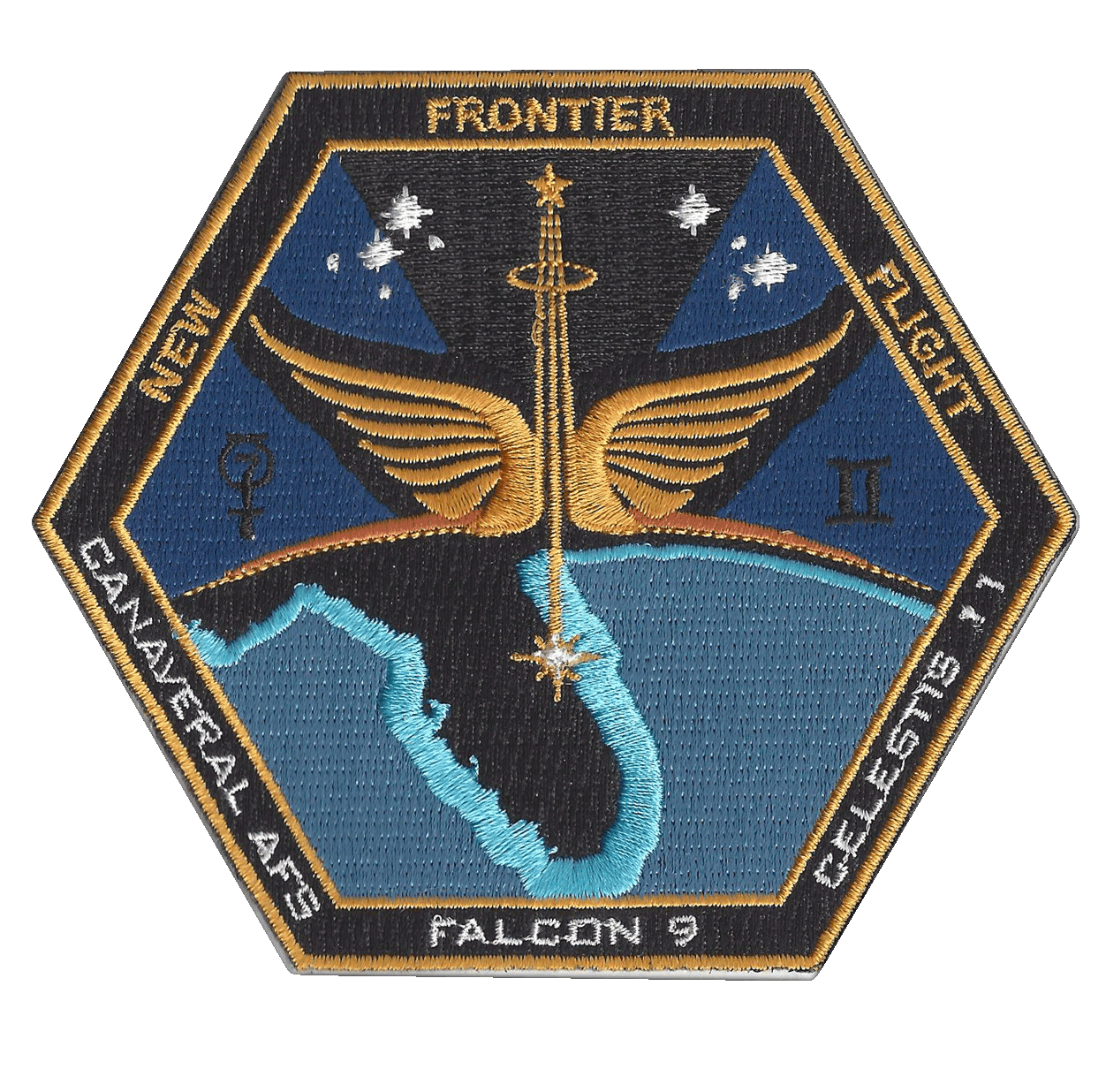 The New Frontier Flight - The star burst in the center of the logo draws the eye to Cape Canaveral, Florida, home of the Canaveral Air Force Station and the launch pad for this mission. The Mercury symbol (left) and the Gemini symbol (right) remind of participant L. Gordon Cooper's flights to space during the time of John F. Kennedy’s “New Frontier.” The nine stars represent the nine engines on the Falcon 9 rocket needed to take bring this mission into orbit. Lastly, the wings in the center stand for the symbolic realization of space travel for all of the participants on the New Frontier Flight.