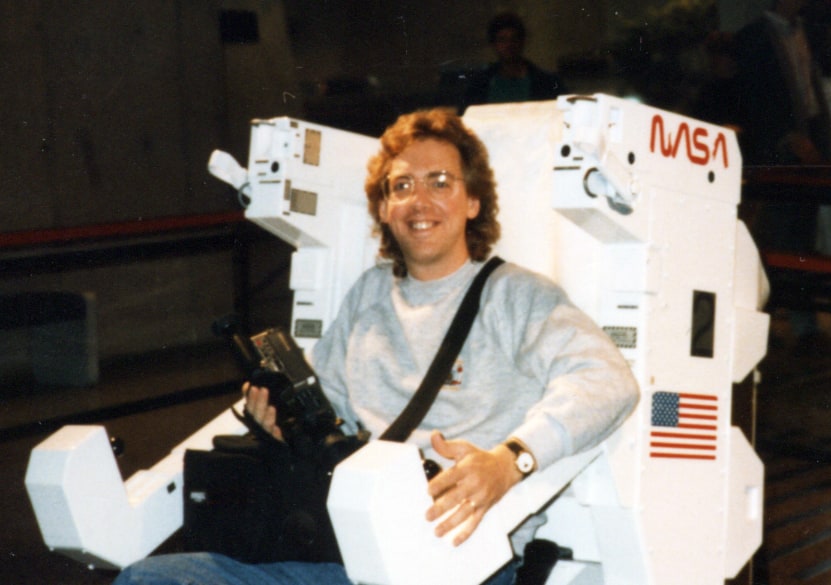 As a young boy, Randy was raised watching sci-fi movies and Star Trek on TV. He was always fascinated with outer space and had dreamed of becoming an astronaut.

However, after his father died in a car accident when Randy was a young teen, his mother, Betsy, moved the family over to Cornwall, England, where Randy finished his schooling. During this time he began writing songs and singing in cafes.

He was finally noticed by Ian Kimmet who eventually signed Randy to Bearsville Records and who became Randy's mentor. After moving back to the U.S. in New York, Randy began a successful career as a singer-songwriter. The cover of one of Randy's albums, called "TERRAFORM," features a picture of Randy in an Apollo 11 spacesuit. Among the songs he wrote was a song called "I'm Gonna Build Me a Rocket." So, Randy really never stopped thinking about his original dream.

He is most famous, however, for his #1 hit song, "Just When I Needed You Most," which he wrote and recorded himself in 1980.

He moved to Nashville in 1985 with his wife Suzi, and began writing songs for some of the more famous country artists: Alabama, Oak Ridge Boys, Charley Pride, Kenny Rogers, and many more. Even Dolly Parton recorded one of Randy's songs.

He became known in Nashville as one of the nicest guys in town, and everyone who met him - even once - loved him. He always had time for anyone, whatever your station in life happened to be. He was a gentle soul with the voice of an angel.

Randy was diagnosed with Leukemia in January 2003 and for a year ‹ with unwavering hope and determination ‹ we fought together to rid him of this illness. He never once complained of pain or discomfort. All of the nurses on the ward at Vanderbilt Hospital in Nashville wanted to take care of him that day because they all loved him so much. He always had a smile on his face and that is one of the wonderful things that I will remember most about him and the blissful life he gave to me for 22 years.

He passed away in January 2004 and left behind his wife, Suzi, his mother, Betsy and three brothers: Dave, Mark and Ron.