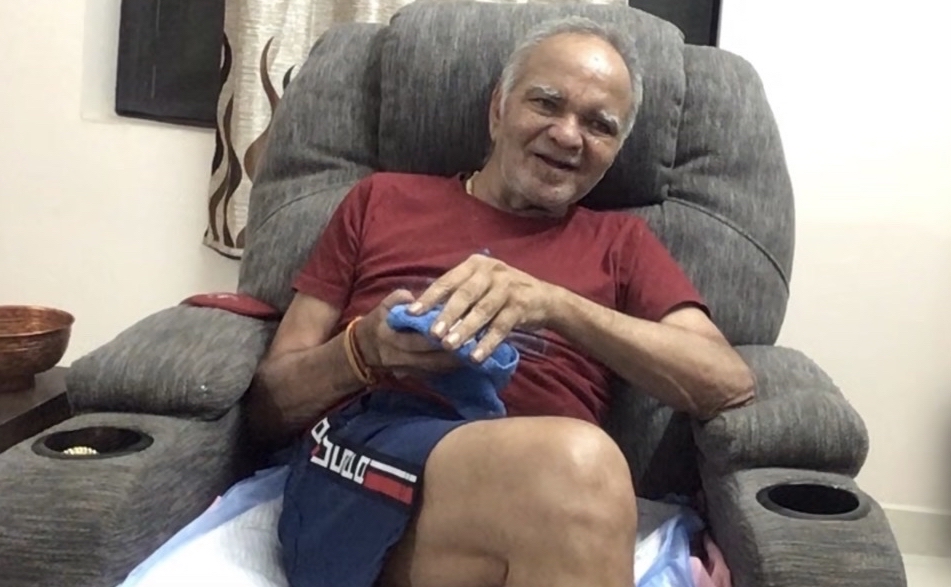 Vuppu Venugopal Rao was born on 7 November 1949 A.D., in Nalgonda District of Hyderabad, Telangana, India to Hindu parents, Chandra, and Rukmini Vuppu. Both his parents and ancestors were heads of villages in Nalgonda officially called as Patels and belonged to the Munnuru Kapu caste, which is described as a combination of two Telugu words “Munnuru” meaning 300 and “Kapu” meaning protector of the land, attributed to war-time tasks they performed as warriors while transforming themselves as farmers during peacetime tending to the daily needs of the community.

He was an inspiring visionary, generous contributor, and a relentless fighter despite several hardships and personal sacrifices throughout his life. He lost his mother Rukmini Vuppu at the tender age of 8 years and had to undergo several tribulations under his stepmother, wherein he learnt to grow up on his own with the love and care of his fellow villagers. Again, he lost his beloved elder sister Poola Vuppu in his teenage years, owing to the family strife along with his family fortune being usurped by his stepfamily leaving him with no siblings and parents to lean on. Despite which, he later lovingly sheltered, educated, and guided his stepbrothers when his stepmother had passed away.

During his early youth, he assisted his father in his administrative duties of governing the villages and built many primary schools and Hindu temples to educate the children and uplift the human consciousness within the community. Towards the same causes, he subsequently fought for the liberation of Telangana movement as the head of Nalgonda revolutionaries. However, with the realization that the nation needed more unity to prosper during the nascent stages of post-independence era, dissolved the movement in agreement with his comrades.

He studied Bachelor of Commerce from Osmania University and went on to work for Reserve Bank of India in Foreign Currency Exchange in the later part of his life. He transitioned to Hyderabad during his education and married “Thota Bharathi Naidu” whom he met incidentally through a common friend, after realizing that they not just shared the same Osmania university as their alma mater, but also had gone through their early phases of life with similar life struggles and personal losses of family members. And yet they had persisted with utmost dedication towards their mission with the same national spirit, global vision, humanitarian principles, family, and spiritual values for life at large.

He was always known to care for the most vulnerable in the society and fight for their rights, while simultaneously donating generously for their daily lives, sometimes even beyond his financial capacity. He relentlessly strived for the sustainability and growth of the impoverished and fervently fought for the upliftment of the youth of many minority communities like Muslims, Christians, Buddhists, Sikhsand Jains by constantly educating and inspiring them while personally catering to their daily survival needs with his own money.

He was a strong believer of Swami Vivekananda and considered that the world is one family “Vasudhaiva Kutumbakam” and everyone needs to get an opportunity irrespective of where they come from. He was a spiritual meditator and a raja yogi, who studied neuroscience and astronomy while imparting the same vision to the community youth that one needs to have both spiritual and scientific knowledge with a clear understanding of both the microcosm “human body” and macrocosm “the universe” for a fulfilling life.

How much ever shared would be still less about him as he sacrificed every ounce of his blood and every moment of his life for the welfare of others, always caring and always inspiring. An undying spirit, he fought tenaciously till the last minute with a sepsis medical condition and even while suffering in deep pain, he left his last breath with utmost devotion, gazing and folding his tied hands in yogic namaskar at the portrait of Lord Shiva in Meditation on his Moon throne, during the auspicious after hours of Sri Rama Navami on the 11th of April 2022 A.D.

He is currently survived by his two sons and his granddaughter “Rhea Sangamita Vuppu”.

With deep sorrow and longing for his reincarnation on this mother earth in a yet another auspicious and inspirational form, we bid farewell to “Venugopal Rao Vuppu” into the Deep Space Journey of the Cosmic Universe ✨ amongst the stars with spiritual prayers:

To our beloved Maa Manchi Nanna,