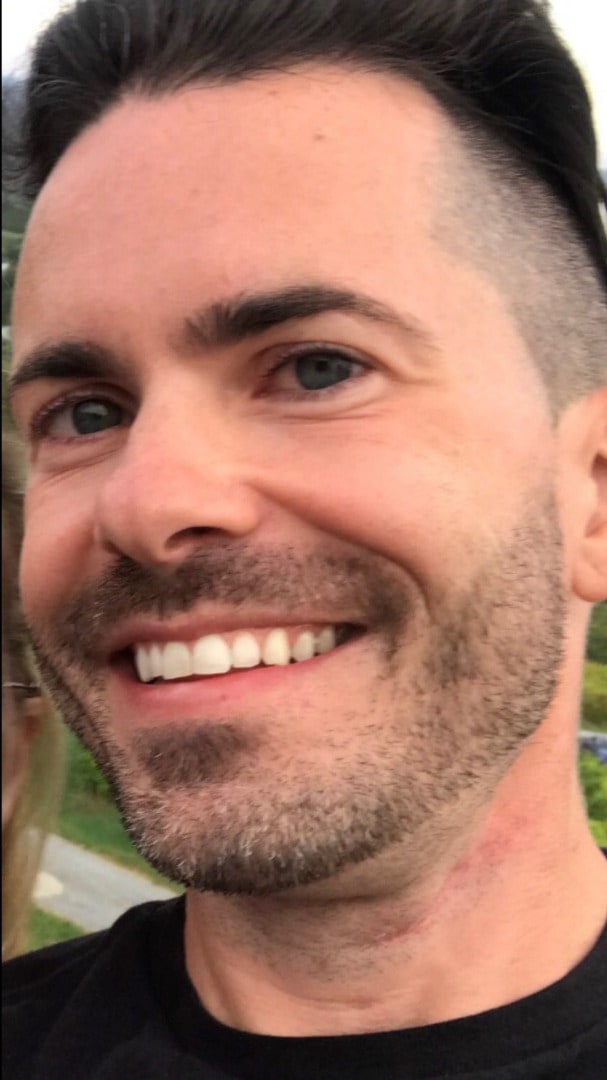 Herman Tandy Mitchell IV (also lovingly known as “L’il John”, “John-John”,”John-Boy”, and, later, “Ironbrains”) was born on December 5, 1981 in Lexington, Kentucky. He will always be remembered as a true shining star on this planet who would light up any room he entered. If it wasn’t his million-dollar smile, it was his bright, colorful clothing, always with shoes to match. He even painted a pair of sneakers to resemble the galaxy.

John moved to New Jersey at age 16 where he gained a stepfather and four new brothers. After finishing high school, he returned to Kentucky and completed a degree in psychology from the University of Kentucky. He moved to Charleston, South Carolina where he studied for his Master’s degree while working in the hospitality industry. His cancer diagnosis brought him back to New Jersey in 2017, where he could be near his mother Lisa and sisters Megan and Ashley, all of whom he adored. His commitment to protecting his family was fully evident. He once mentioned that he was more worried about how his family would handle his diagnosis than he was about his own loss of life. His selfless concern for others was again demonstrated when he signed up to be an organ donor.

My son was a kindhearted, gentle soul who cherished his family and life-long friends. He always knew what to say and was quick with a compliment – especially with the ladies (that’s what HE claimed, anyway). He was the ever-smiling friend who was always polite and mannerly. He had a fierce spirit, but he was extremely sentimental and thoughtful. John loved being the center of attention and making people laugh. He emceed at musical events where these talents where on full display.

There were many things that brought joy to John’s life. His beloved Lexus who he named “Nikki” was one of his favorite projects. He would tinker for hours on her. He was a huge Marvel fan. For Halloween, his favorite holiday, he built an Ironman suit, complete with electronic helmet, flashing lights and an arc reactor. This creation wowed audiences and won him many costume contests. He was elated when children approached him in awe and asked to take photos with him. Nothing made him happier, however, than Christmas morning. He would be the first one down the stairs to see what Santa brought.  Even at 37, he would beat his nieces Mya and Juliana to the brightly-lit tree. It gave him great pleasure to give gifts that were even better than Santa’s!

John was a gourmand of sorts and prided himself on his cooking skills. He reveled in preparing holiday treats for his family. A simple “Taco Tuesday” with friends was his favorite. Of course, no meal was complete without the spiciest hot sauce he could find. He cherished these gatherings with his friends and family. Those times that he shared with his nieces and nephews were priceless.

His love of nature was apparent at a young age when he would sneak out of the house during severe weather alerts to capture potential tornadoes on film. That sense of adventure never left him. He made it his goal to try everything from rock-climbing to cliff-jumping to eating a scorpion followed by a tequila shot at his sister’s wedding celebration. He was equally happy flying a kite, hand-feeding squirrels or just lying in a hammock enjoying a beautiful day. He would just stare at the skies and dream of what existed “beyond”.

John had an artistic brain that allowed his to view his surroundings in a way others couldn’t conceive. He loved using his talents to build elaborate creations, from Lego Spacelabs as a child to intricate gaming consoles with flashing, spinning lights. He was a huge “techie” who always kept up with the latest innovations. Unfortunately for him, that made him the ‘go-to’ guy fielding endless questions from his family. He was amazed and intrigued by how technology was opening windows into the further exploration of the universe. He once posted on social media, “More than anything else in this life, I would like to go to space. I wish to bring my family which obviously includes Trent and Keeley” (his 2 best friends). John always had an interest in the galaxies. He spoke of visiting Cherry Springs State Park to witness the celestial skies. In his final days, he whispered to his sister that he had just dreamed of traveling. When asked where, he replied, “Belize, Japan and Outer Space.” When asked how he would get there he replied, “Rocket Ship.”

So, this is our way of showing our love and letting him fulfill his dream. He happily carved his unique path through this world. We can hear him now quoting his favorite character Ironman, “Following’s not really my style.”

So, here’s to you, John-John. Go explore and fly among those stars.

You will forever be our Superhero!!