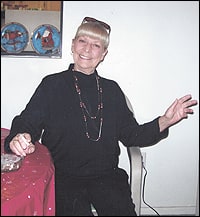 Gayle Jeanne Husted Johns was born on December 15, 1940 at St. Francis Hospital in Los Angeles, California. She spent her early years in El Sereno, California before her family moved to San Gabriel, California where she attended San Gabriel High School from which she graduated in 1958.

Immediately after she graduated she started working for Bank of America in San Gabriel, California. She later joined Security Pacific National Bank and became a vice president and manager, and served as manager in several different branches. In 1958 she meet Edward Johns of Monterey Park, California and they were married May 23, 1959. Gayle graduated from UCLA with a degree in banking. She is survived by her two children, Michael and Kimberley, four grandchildren and four great grandchildren.

Gayle was the adventurous sort: she water and snow skied; she rode dirt and street bikes; she made many flights in her father-in-law's Cessna, the bank's helicopter, and a glider; and sky dived on her 55th birthday. She shared life as a liveaboard on both a large powerboat and a 47-foot ketch. She was a great party planner especially when it came to her husband's birthdays.

She loved people and never met a stranger. She spent a large part of her life helping her sister who was institutionalized from the age of 23 until her passing on October 22, 2012 and who will be traveling with Gayle on this voyage into space.

Gayle was the love of my life and I miss her. We have been together 54 amazing years. I am excited for you and Candy making this incredible trip to space and I will see you when you get back. I love and miss you so much.

- Written by her husband