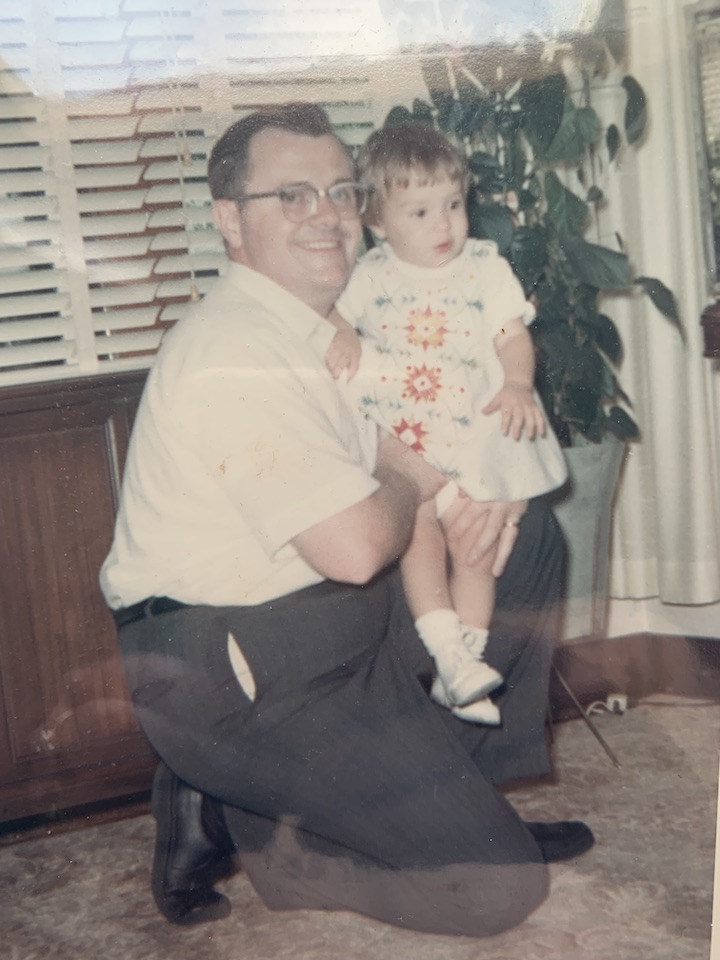 As I search through a lifetime of memories of our dad, William R. Kropp Jr., in the effort to capture the essence of who he truly was, I realize I must have remarked a thousand times that surely “he will walk through the sunset of his life with his working boots on.” Our dad discovered he held a brilliant fascination with science from his early youth. That passion ultimately launched into a lifelong pursuit of studying the neutrino with an experiment in a gold mine in South Africa. It was in South Africa where he, along with his lifelong friend and colleague Dr. Henry Sobel, first observed neutrinos and, incidentally, where he brought his new wife, our mom Carol, and where my lifelong friend Cindy Sobel and I were subsequently born! Our dad's life and research contributions are memorialized on the UCI Physics Department website: https://ps.uci.edu/news/2437. His contributions not only announced the birth of Neutrino Astronomy, but ultimately detected neutrino oscillations, the discovery of which resulted in the Super-Kamiokande being awarded the 2015 Nobel Prize in Physics.

Although our dad’s contributions to Neutrino Physics were notable, it was his dedication to education that profoundly fostered in me a joy for learning. Our dad always said, “the more you come to understand a topic, no matter how simple and mundane, the more you come to realize how complex and beautiful it is.” His joy in living a purposeful life profoundly impacted how I live my life. He would often say something insightful about life’s transient nature and once expressed this sentiment: “Each subsequent decade passes more swiftly than the one before it,” as a reminder that we live life with intention and purpose.

Our dad’s aspirations affected my life ambitions. But over time, I came to realize it was his spirit of humility that encapsulated the ideals that guided his life. His attitude of modesty derived from a keen awareness of the grand scheme of things. He once commented that his physicist colleague, Dr. Michael Moe, made a major contribution to Nuclear Physics through his discovery of double beta decay. When I responded that it was something I had never known, our dad remarked that he felt an impressive characteristic about his colleague was that “he never was one to stand atop a tall mountain to beat upon his chest." Our dad was similarly modest. In 1995, his mentor and physics colleague, Professor Frederick Reines, was awarded the Nobel Prize in Physics for neutrino detection. As Dr. Reines was not well at the time of the award ceremony, our dad gave Dr. Reines’ Nobel Prize acceptance speech on his behalf, an honor our dad never disclosed until after he had returned from Sweden! I am ever grateful to Dr. Reines' cousin, Leonard Cole, for the countless hours he spent interviewing our dad discovering Dr. Reines' life and contributions to Neutrino Physics and for capturing the story in his book: https://leonardcole.com/product/chasing-the-ghost.

Our dad’s love for natural and created beauty was ever-present throughout our childhood adventures into dramatic landscapes filled with quartz and obsidian, geothermal features, yellow sulphur springs crystals and geysers, pure white calcium stalactites, red iron rock arches, and exposure to the dramatic complexities of Carmina Burana, Tchaikovsky and Prokofiev.

But shining brightly above his adoration of nature and the arts was his love for family. As he helped to create so many emotional memories throughout our childhood, his gift of love for Katie and me was abundant in their midst. His love for us will forever shine through endearing memories of bunny ears, camping fairies, and his playful way of teasing us about Ebenezer Scrooge, the Man in the Moon, and his niece Mary and my lifelong friend Cindy about the Easter Bunny. When he would call her house, Cindy would say “Sobel residence, Cindy Speaking.” Our dad would say, “Well hello Cindy, this is the Easter Bunny. Is your father available?” He loved our husbands Dennis and Patrick intensely. He held them in the utmost regard, acknowledging their dedication as husbands and fathers and often remarking that he could never possibly measure up to them.

Our dad’s passion and dedication to both the sciences and to the natural and created beauty of the world will forever live on through my sister Katie and me, through our husbands, and through each of his six grandchildren, Shane, Corey, Caryn, Trey, Samantha, and Jessica.

Dad, May your heart be free and your spirit forever belong not only to your beloved Sierra wilderness, but to the universe, the mathematical beauty of which you dedicated your life to reveal and share with humanity. I will forever cherish that look in your sparkling blue eyes as they shined with loving guidance throughout my life. Your wisdom and precious gifts will live on forever through all of us and, May your guiding light that we "Be of Good Cheer" shine eternally...I love you Dad!

P.S. I love that your nickname for me was Min

Photo 10 caption - Dad and MaryAnn with his traditional bunny ears! (2017)

Photo 11 caption - Always a great way to end the day with his son-in-law Dennis! A cheers with Grandpa Bill!! 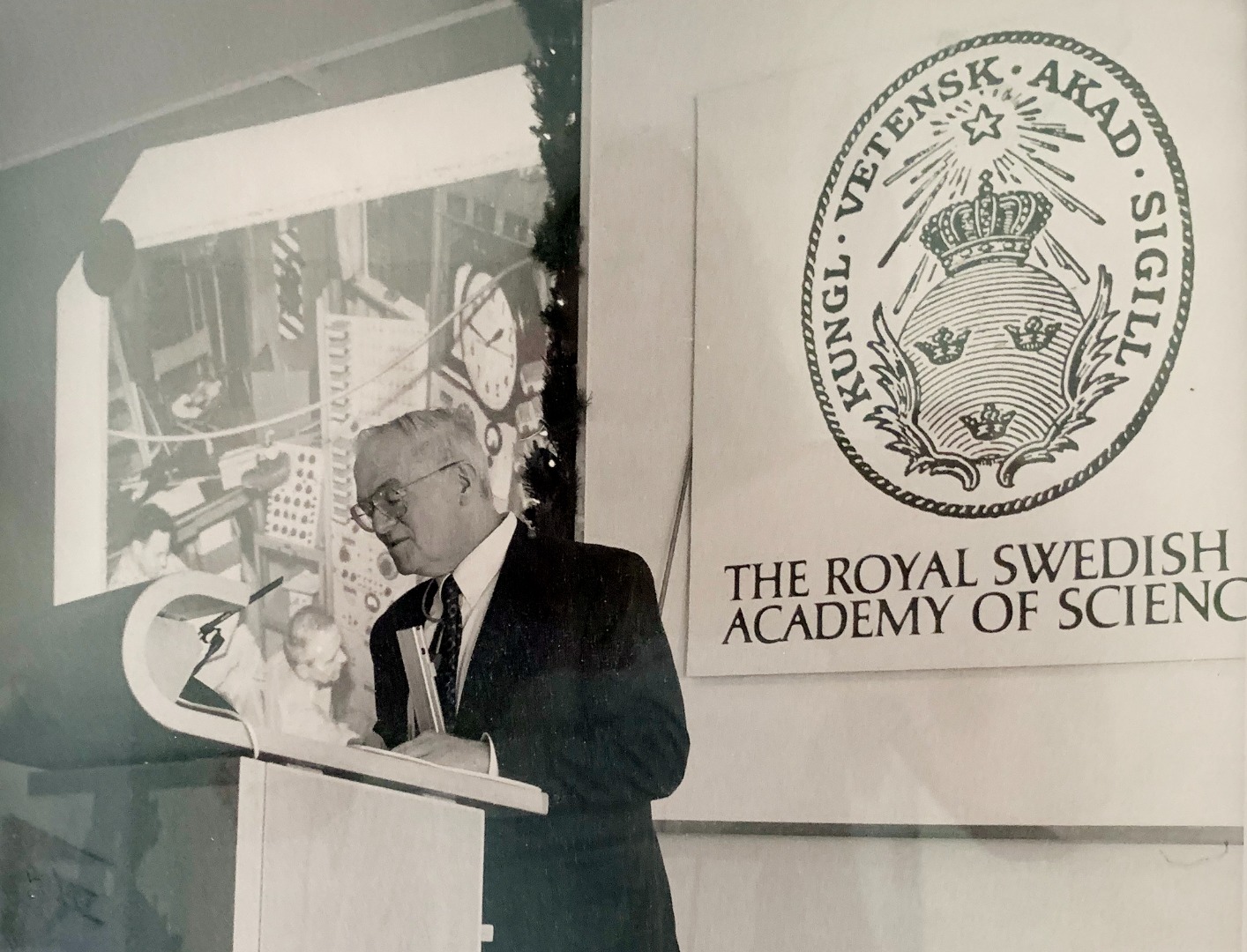 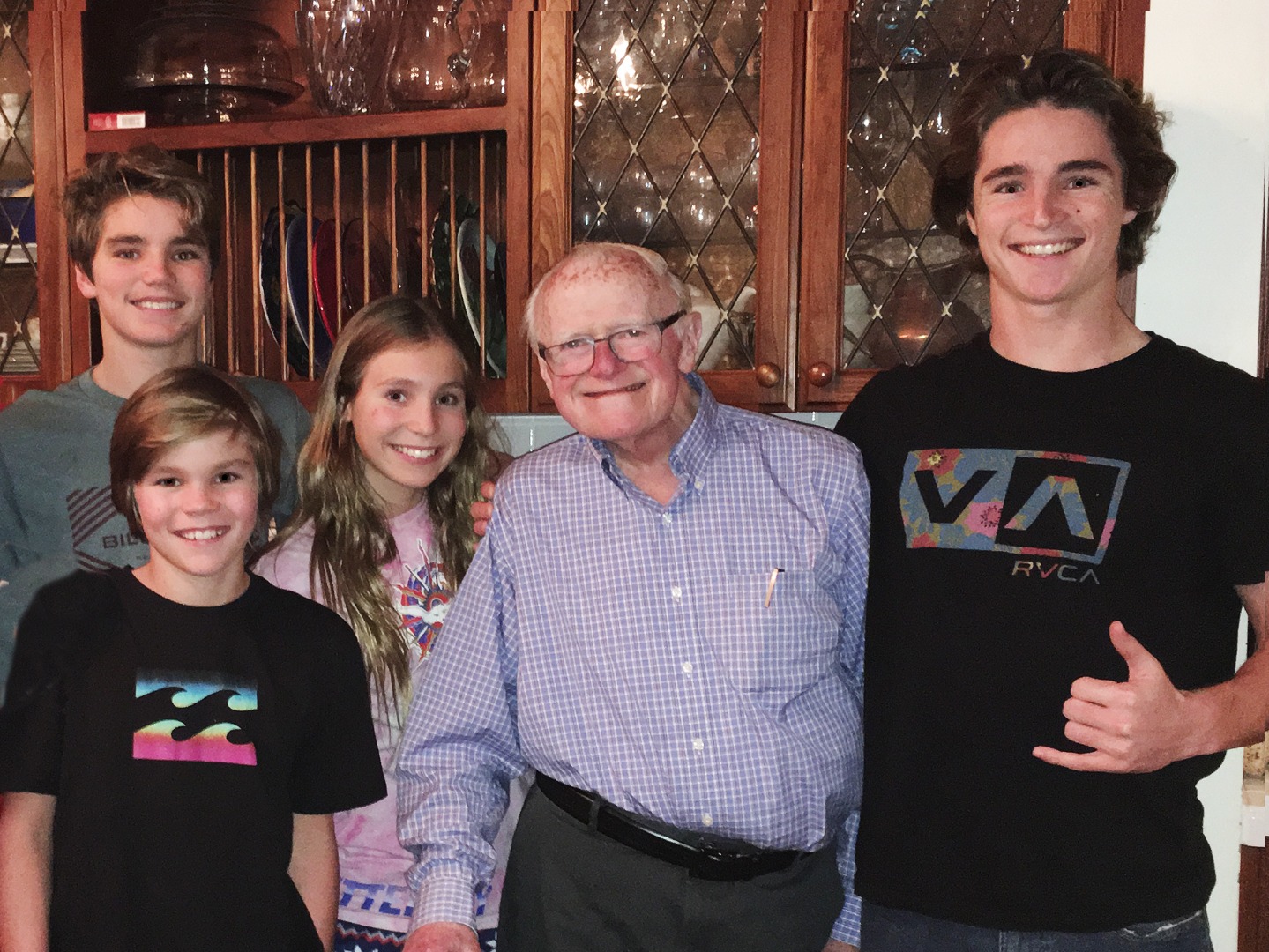 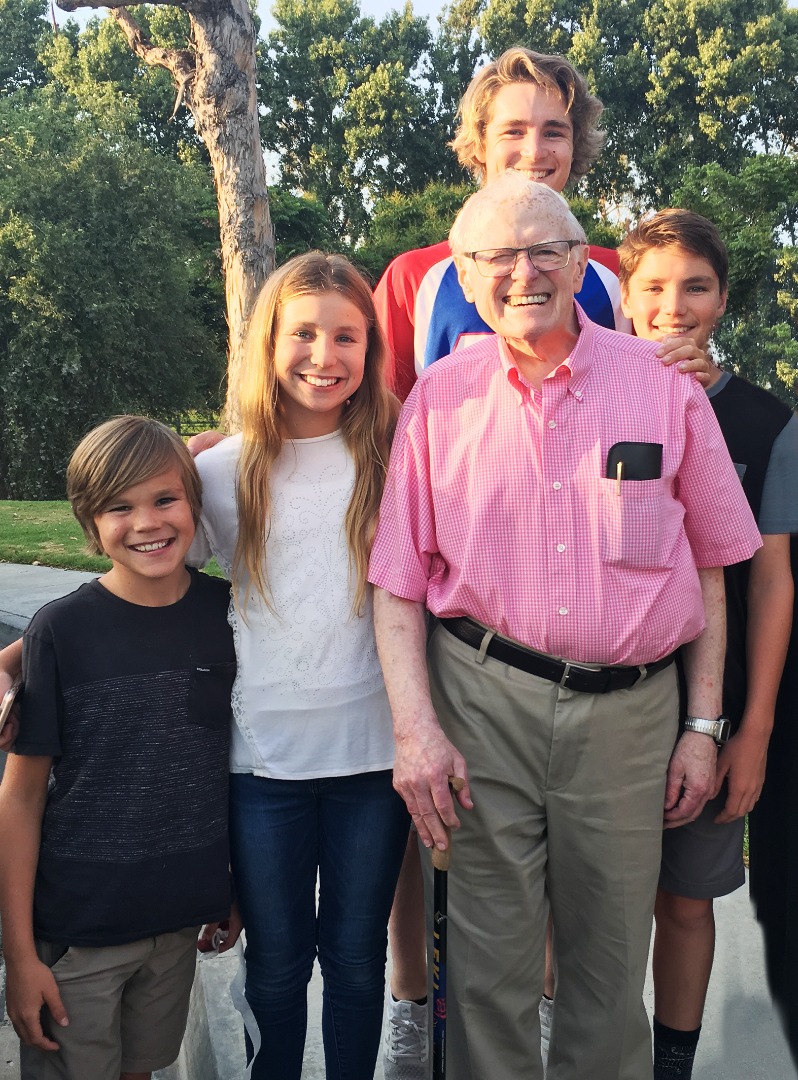 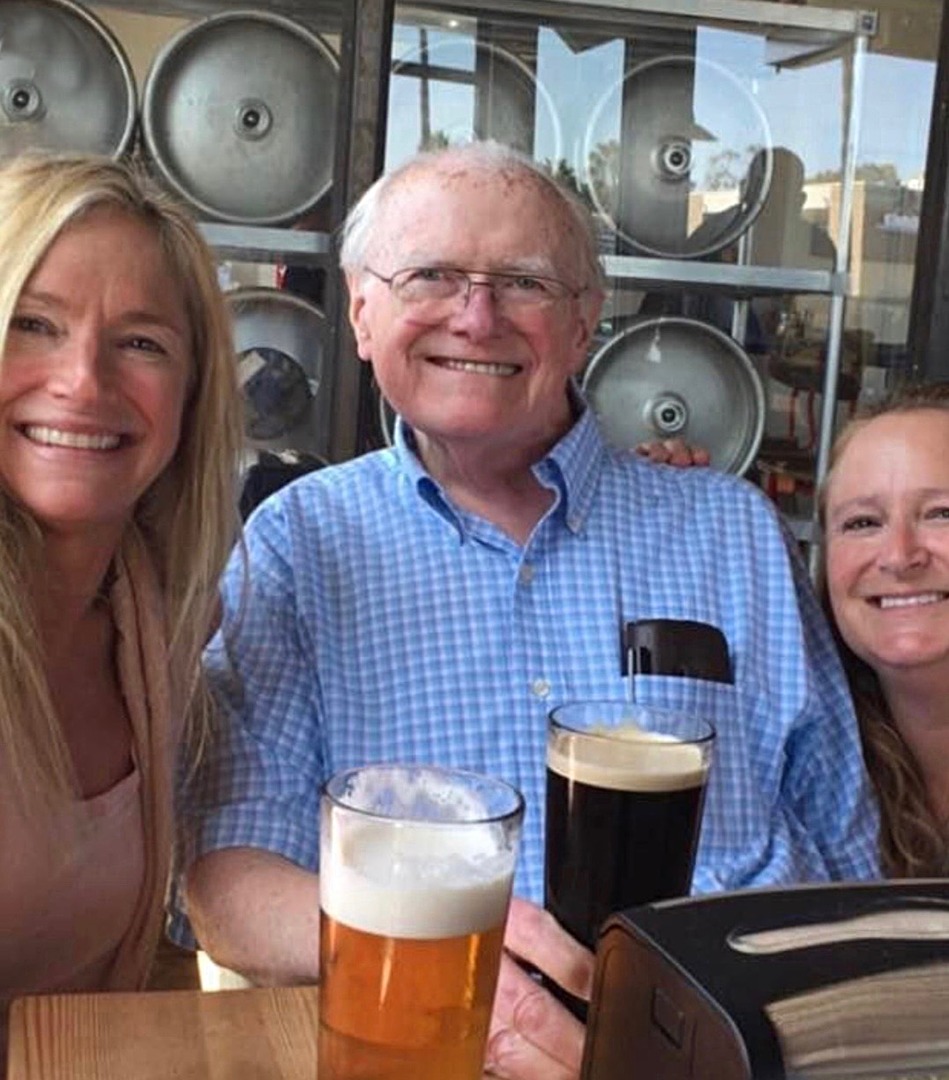 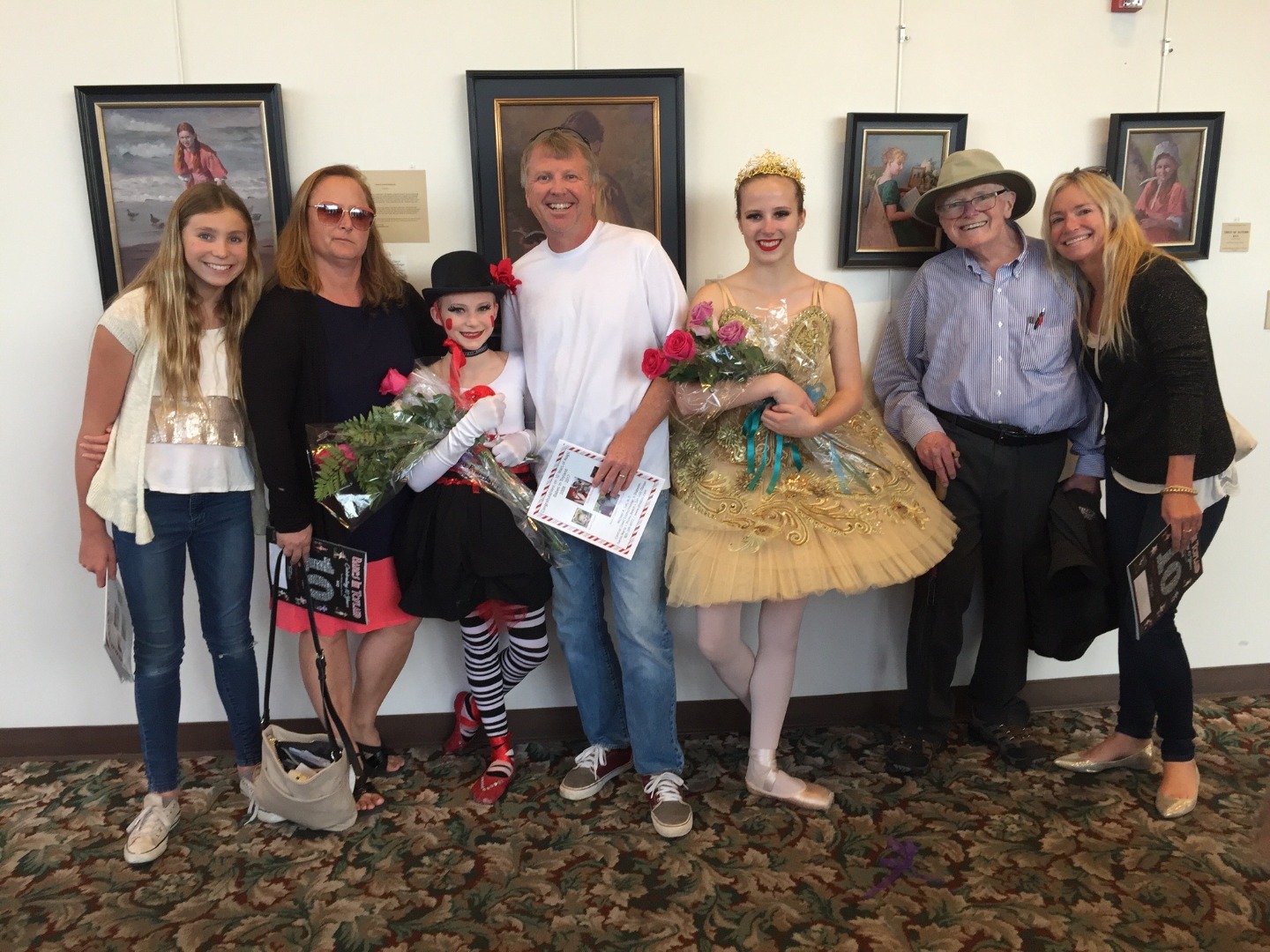 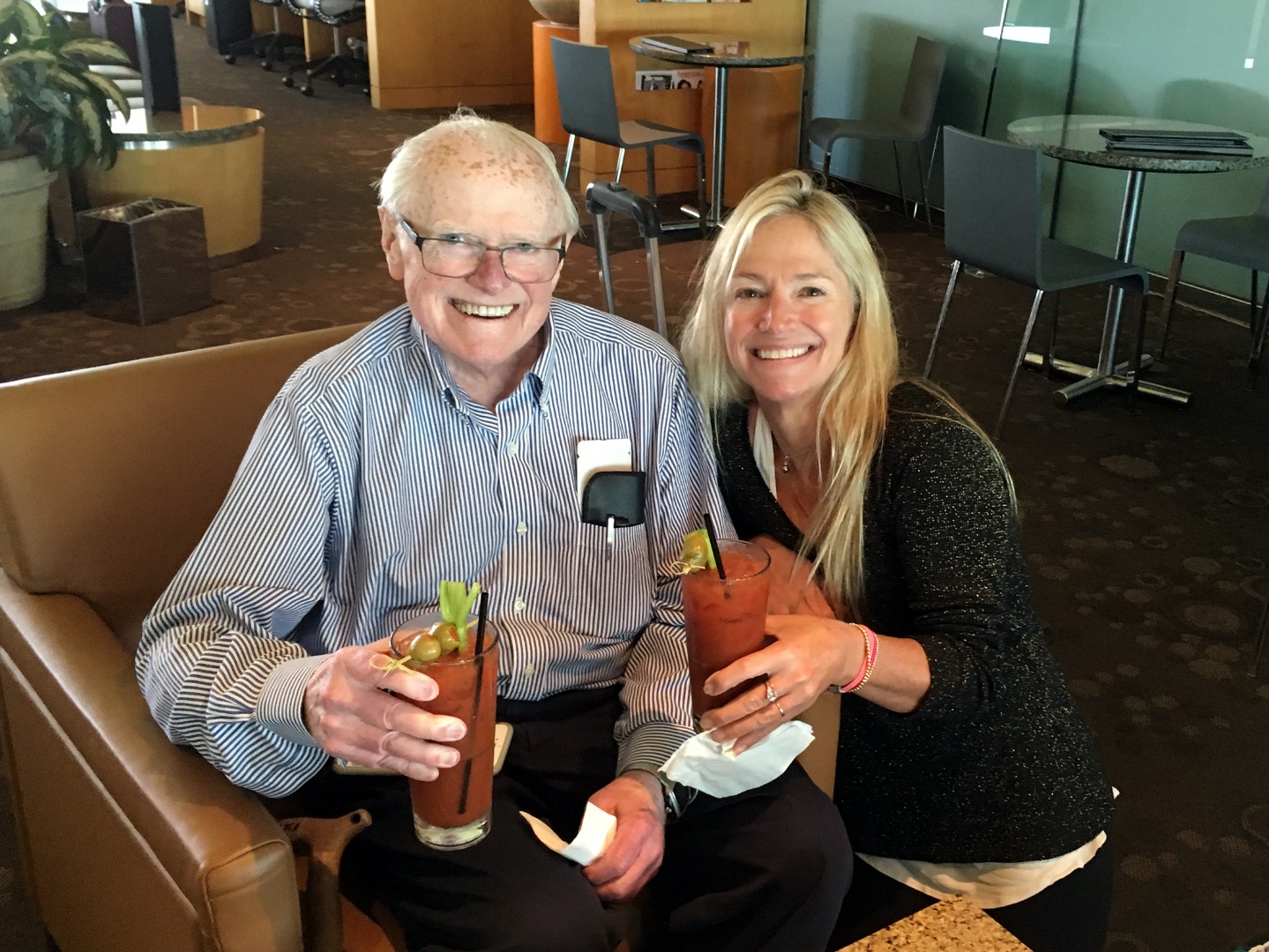 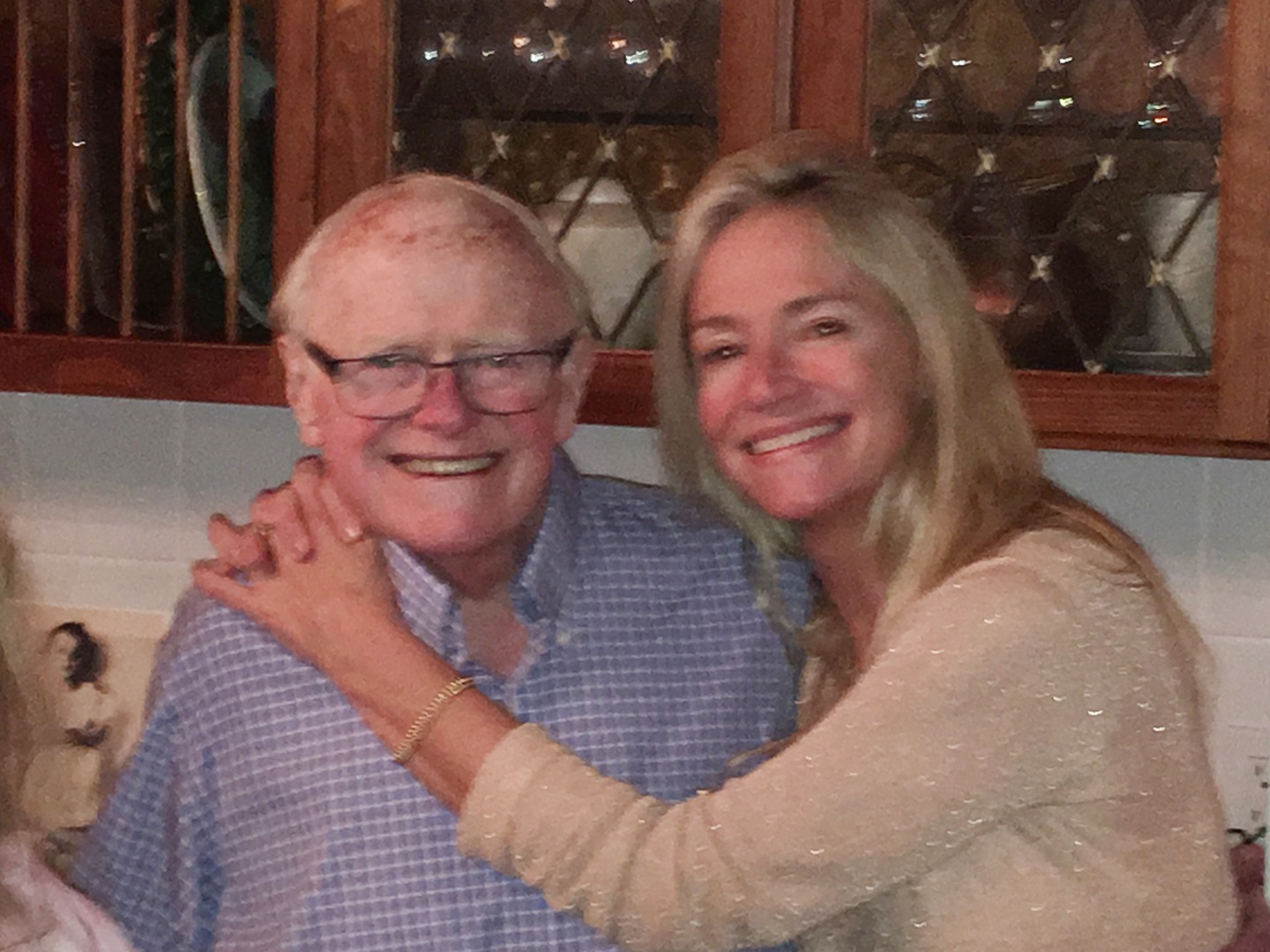 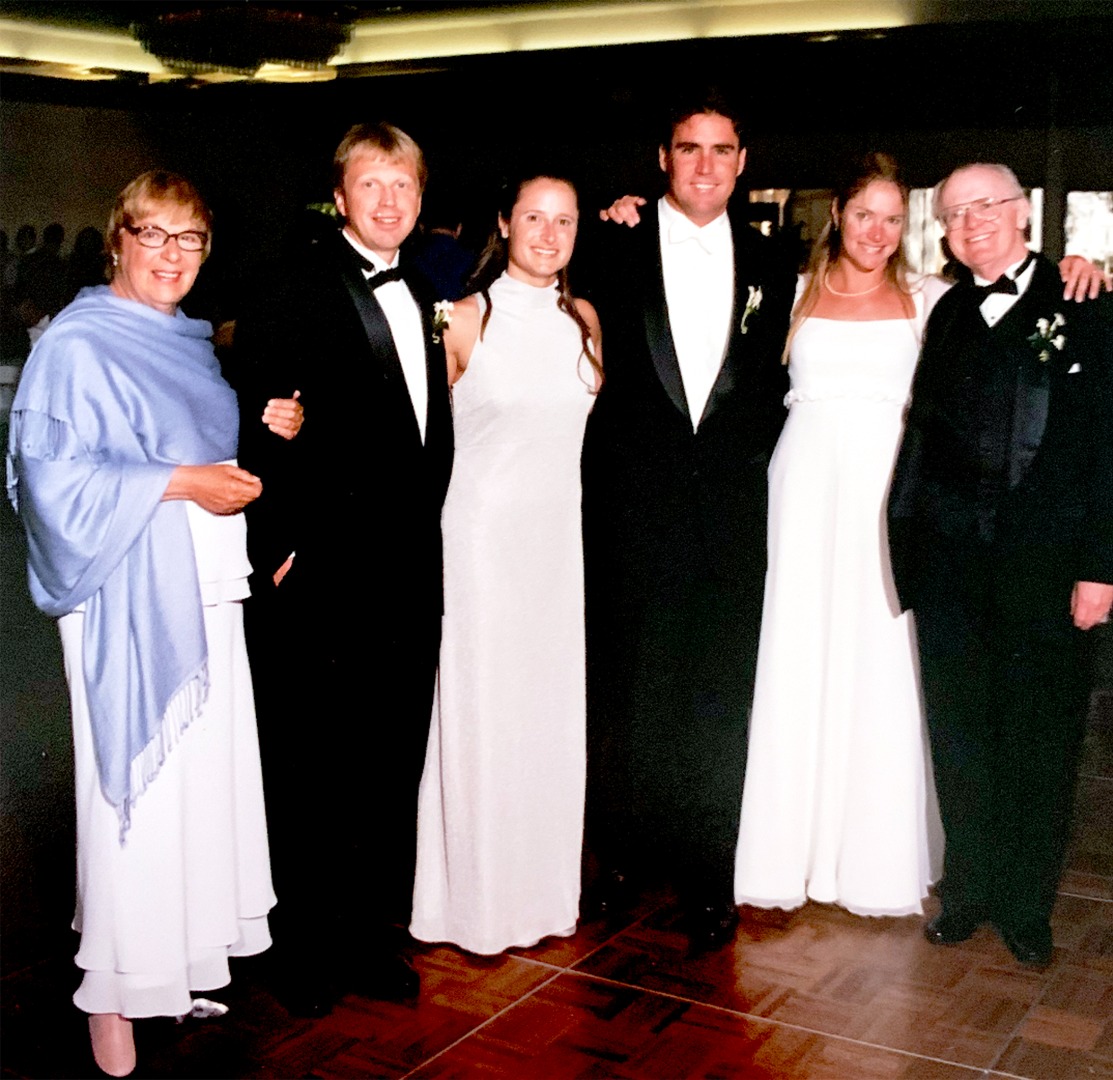 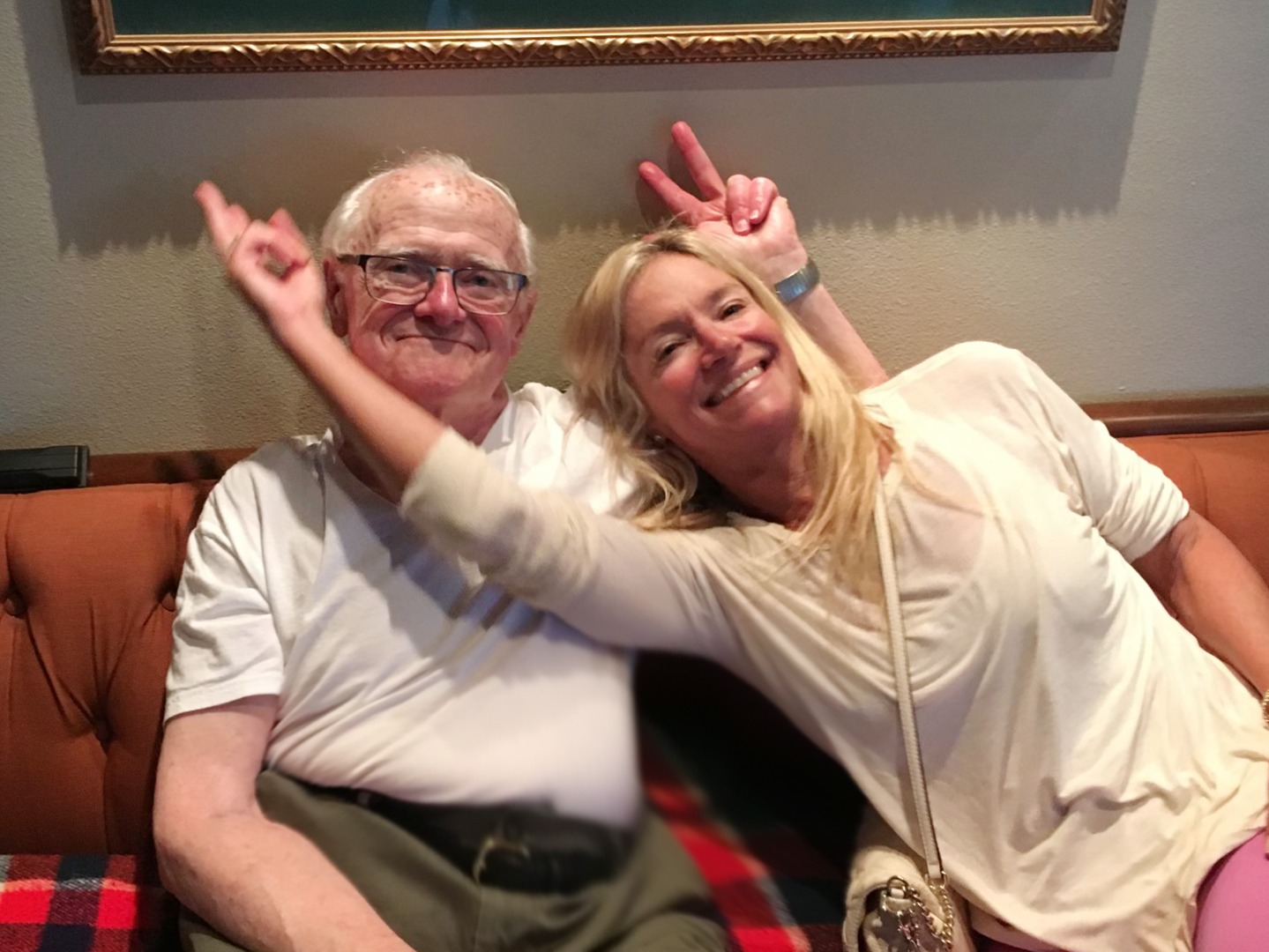 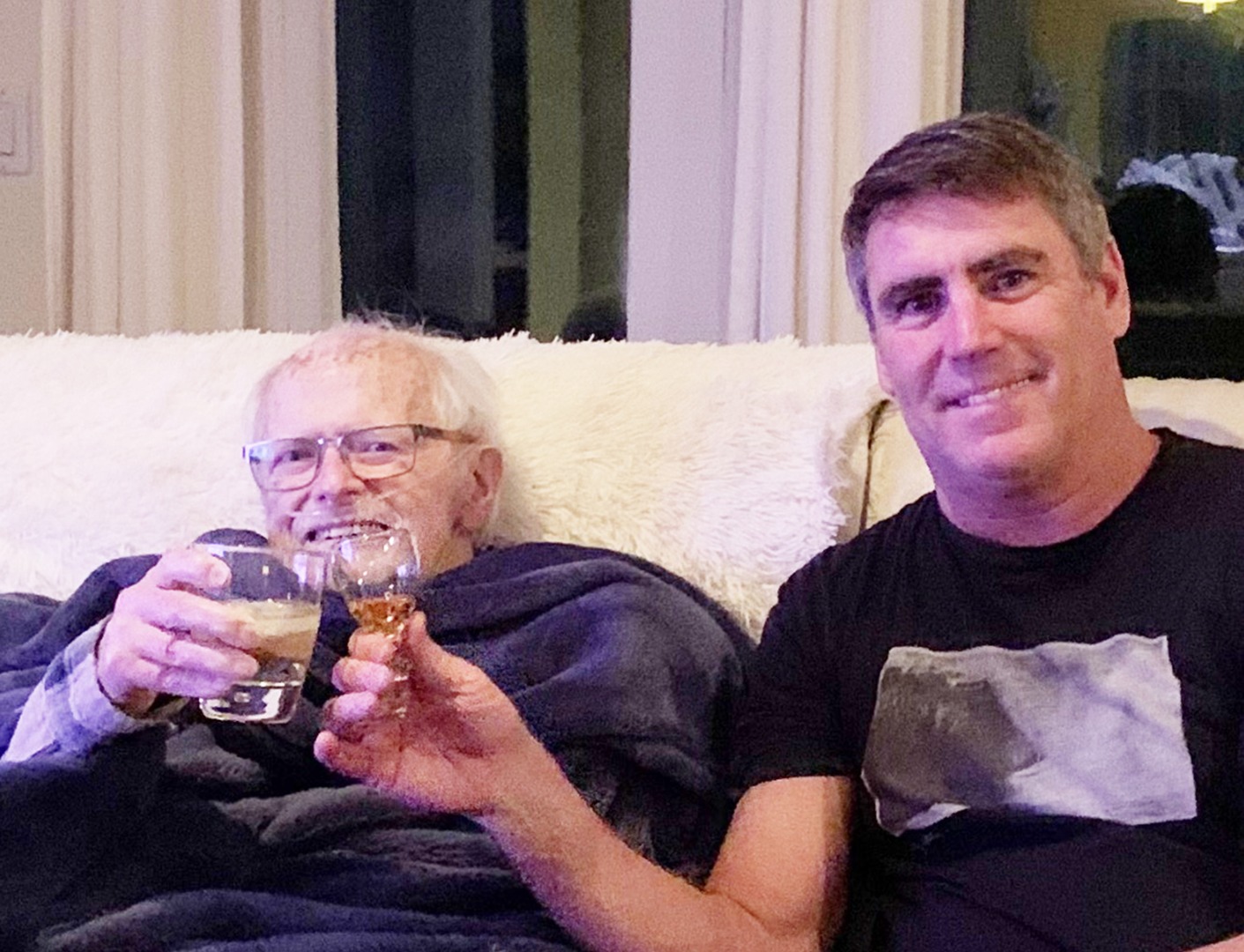