Dedicated to all of those on board the mission and the ones that made it happen: their families and friends.

About The Tribute Flight

Read about the participants aboard the Tribute Flight.

Rear-facing camera of SL-2 showing release of the spacecraft from the booster.

About the Tribute Flight

Tribute Flight -- the 7th Earth Rise mission and 14th memorial spaceflight -- was launched to space at 8:01 am MST (10:01 am EST, 3:01 pm GMT) November 6, 2015, aboard a SpaceLoft XL rocket. It was a chilly but sunny morning in the White Sands Missile Range in New Mexico. Family and friends cheered as the rocket rushed to carry its precious cargo to space and back.

"It will take off very quick: 16 times the gravity (16 G's) it is really fast. The rocket produces about 12,000 pounds of thrust. It will be a delay you will see the light come on, everybody will cheer, then you hear the roar of the motor as it flies. Then it will burn for 15 seconds, reaching 4,000 feet." Jerry Larson, UP Aerospace CEO.

The Tribute Flight is dedicated to all of those on board the mission, their families and friends. It also pays tribute to the ancient Native Americans of northwestern New Mexico whose thousand-year-old architecture speaks of a culture that was very much in tune with the motions of the Sun, the Moon and the stars.

"One of the things that makes this so interesting and so cutting edge is that UP Aerospace is able to accomplish real missions, increasingly complex missions in a small, compact and therefore affordable fashion. That is really a revolution in space technology." Charles M. Chafer, Celestis CEO

Memorial Service
"...we will always look to the sky when we miss you. Please rest in peace in your final resting place. And keep your eyes on us." Family and friends visit the rocket on the launch pad for a final farewell.
Mission Control Visit
"When you get out to the pad, your payload is the first that will touch space. We put it way up in the front, it is in the rocket nose. […] It is contained in the top blue section. " Jerry Larson, UP Aerospace Flight CEO, describes the launch sequence to guests.

Launch Day
Earth image aboard the Tribute Flight.
"It will take off very quick. It will be a delay, you will see the light come on, everybody will cheer, then you hear the roar of the motor as it flies." Jerry Larson, UP Aerospace CEO.
Mission Video

ABOARD THE TRIBUTE FLIGHT

"I really appreciate how much love and care I received from you. So here is a gift from me, because you loved to travel. Enjoy and let me know how it was later. Bon voyage."
Moto Yuki
"Japan usually has a very long life expectancy, so it is especially sad that you are gone before you mother. [...] All I can do now is make your dream come true."
Mom
"It really did not hit me until I saw it go. It was amazing. My mother was an amazing woman, one of the first deputy officers in LA county.[...]She was an adventurous, loved life, traveled all over the world, she’d been in all kinds of vehicles, and planes, balloons gliders, she always wanted to go to space. This was a fulfillment of her wish. It was great."
Berry Hawkins
"You always helped us through hard times, by cheering us up and making us laugh. So now it is our time to give you back a favor. We are going to make your dream come true, we are going to send you to space. Your mother and brother put in so much effort to make this happen. Too bad that we cannot hang out with you anymore. But hopefully you will be look down on us. We think this is a great idea. Have a wonderful trip."
Friends
"You are such a free spirited person dad, full of curiosity, fun loving and always the center of conversation. You have led our family with such a strong presence even in the difficult moments. You are a stubborn but a charming person and we will never forget the memories we made. Now, we will always look to the sky when we miss you. Please rest in peace in your final resting place. And keep your eyes on us."
Daughter
Watch More Videos 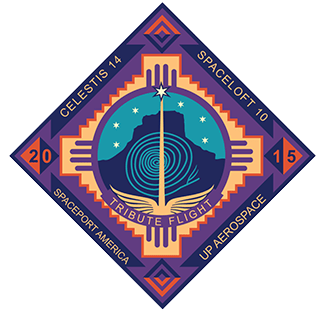 The Tribute Flight - The Tribute Flight logo incorporates both the continuing Celestis symbolic themes of angel wings, the New Mexico landscape, and a star taking flight, and adds a tribute to the ancient Native Americans of northwestern New Mexico. The deep colors speak of a culture (symbolized by the coiled shape) that was very much in tune with the motions of the Sun, the Moon and the stars.  The logo incorporates, for the first time, a reference to the launch site at Spaceport America and continues to honor our launch services provider, UP Aerospace.