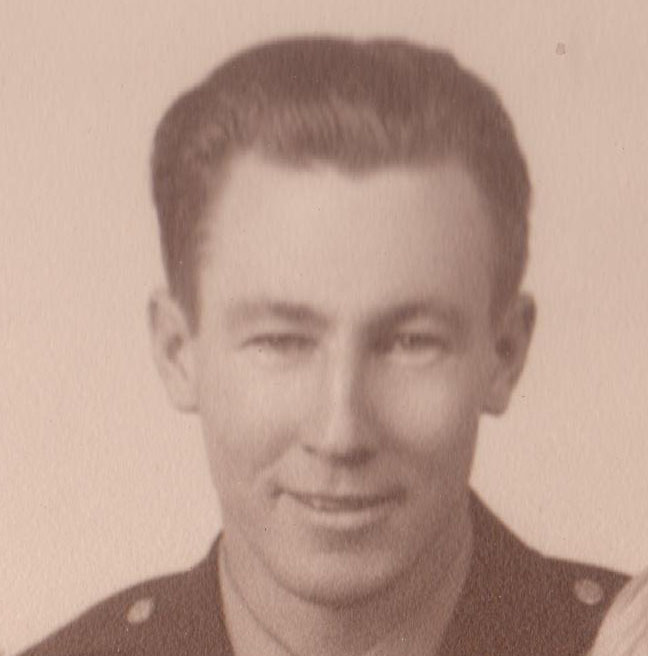 William J. (Bill) Loomis was born in 1912 in Concordia, Kansas. His family of nine moved to New Mexico in 1915, but lost their father, Arthur Hanks Loomis, in 1919. His mother, Edna Jay (Halleck) Loomis, taught school, and his oldest brother Lewis Halleck Loomis moved to Mexico and started working with ASARCO (American Mining and Technology). For years he continued to send money back to the homestead in Las Cruces so that his brothers and sisters could attend college. Bill graduated from New Mexico State in 1933 in Mechanical Engineering.

During WWII Bill served in Patton's 3rd Army, 71st Division 271st Engineers as a Captain. He was proud to serve his country as his ancestors had. They include Lieutenant Thomas Loomis (1714-1792) in the Lexington Alarm, Captain Isaiah Loomis (1749-1834) soldier in the American Revolution, Lieutenant General Thomas Loomis (1756-1842) who served from Lexington to Yorktown and was in the Battle of Bunker Hill and Captain Romulus (Rome) Hanks (1822-1876) who served under Grant at Pittsburg Landing in the 15th Iowa Infantry during the Civil War.

After returning from the war, he bought the Garfield Mercantile Store and operated it from September 1946 through 1947. Shortly thereafter he started his journey to get his pilot’s license with the help of Danny & Melvin McGuire in Hatch, New Mexico. He returned to highway construction management and eventually founded and developed Loomis Construction Co. Inc. for 34 years until he retired. He was a member of the New Mexico Professional Engineers, and was a member and later an Honorary Lifetime Member of the Associated Contractors of New Mexico. He was well known in the industry for smooth pavement and keeping an excellent workforce by maintaining and displaying his loyalty to the workers that helped earn him his good reputation.

He was a pilot, owned his own airplane, and flew all over New Mexico and to Mexico regularly. He was a founder of VFW post 1389 and enjoyed his tenure as Capitan of his powerboat, the "Sweet Lorraine."

Dad - Experiences I can remember. Footsteps and Shoes I can never fill!!!!

Lost his Dad at such an early age - Engle – Oil
Always worked and taught us to do the same.
Known as Mechanic in College - Nooper, Hot Seat
Chemestry Experiment - Home Made Beer - Resulted in Base Drum Incident.
Snooker - Frank Williams
Dad, Ripley, Claude Wiley, Schoolie, Salas, Pompeo, Buchwald, Rocky Leyba, Bob Williams, Tony Villegas, Tony Sayre, Jerry Fraser, Bob Thompson, Sarge, Ramon, and Bob Carroll, could usually get their heads together and solve any crushing or asphalt problem in the state. They always turned to each other for advice and never failed to get help…

Dad and Sarge and Tom Brady and me at the Follies

Always loyal to Mom
Trips to Mexico - even on the Wildest of outings, the other men always said Dad went Window Shopping - Looked but didn't touch

Sarge and the Boilermakers - Car by the Highway - Dad wanted to know why!!!

Sending Mom and to Hawaii

Dad and Van on Sailboat

Phelps Dodge - Fishing Trip - Guaymas - Dad and Ramon and Roberto, Ray Winslow, Bob Hoffman, Bill Hoffman and our Dads
Dad and Tony Salopek - old school buddies. Dad always loved it when Tony would come up lean over the fence and say Howdy Neighbor, Let's have a pawwwty!!
Tony Salopek - Millionaire Tommy Salopek picking him up and carrying him to dunk him in the lake.

Dad taught me to drive in 61 Ford on back roads and then on NM 44
LTD - Early morning Holloman - 2 Deer ran over him!!
Hundreds of thousands of miles - Cutout Ford, Had to take my car to Bank in Abq - Headers Open. Doug Barfield kidded him that Proud of Lincoln - GTO's
Drags, Repaint Hood and Fenders, Fix Door - Cows.

Dad was one of the very 1st contractors to provide health insurance and a profit sharing plan to his employees. He made sure the profit sharing was kept separate from the company or construction related companies to invest so that in case anything happened to the company, the funds would not be affected.

Dad didn't believe in paying for lunch for supervision unless you bought lunch for an engineer, inspector, another contractor's supervisor or in some cases a salesman.

The main thing about my dad was he let me try just about anything I wanted to do and then was there to forgive me when it didn't work out. He had an amazing belief in me and I know it hurt him when I failed, but that didn't stop him from keeping an unyielding faith that I would succeed. It is what has kept me going through the ups and downs and allowed me to climb out of the many holes I've dug for myself.

I feel he's still going to be there to keep me on the right track but also making sure I practice the golden rule.

In fact, I must have believed he's still going to be here or I wouldn't have subconsciously left the day he died out of his obituary. In fact none of our family that worked on it remembered to put in the date. Maybe we all believe that he's close by and not giving up on us.