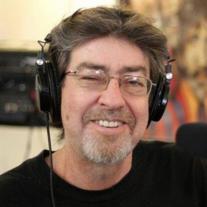 Tom "Erickson" Nagel was born in Ellwood City, Pennsylvania in 1953. He was the baby of the family, having two older sisters, Betty and Linda, and one brother, Richard. His parents, Dorothy and Edgar, spoiled Tom, which only furthered his wild and crazy personality!

Upon graduating from high school, he pursued an education and career in Broadcasting. Working his way up the airwaves ladder, Tom finished with being the evening talk show host, Tom "Radioboy" Erickson, at WNIR, in Kent, Ohio.

Tom loved life, and his two children, Heather and Erik. His leisure time included fishing (using hotdogs as bait), his summer home (which was on wheels), going wild at Erik's band's shows (clearly Erik's biggest and loudest fan), and helping Heather save animals for her rescue organization (from whom a rescue dog, Comet, rescued him). Tom loved his dog, Comet, who went from almost being euthanized at a local pound, to going frequently to a local ice cream stand to share a cone with Tom. Every day, neighbors would greet them as they strolled through his neighborhood in Firestone Park. Along with Comet, you would also always see his 12 year companion Kathy "Aunt Bea" Cook by his side, supporting him and all his cosmic ideas. Tom had a sincere fascination with Big Foot, and kept his listeners amused with stories of rocks being moved at his summer home. He was a Star Wars fanatic and the most devoted Pittsburg Steeler fan this side of the Ohio/Pennsylvania border! Tom had a Steelers "altar" in his man cave, and his children, when babies, used Steeler bibs, bottles, and sleepers. He even wanted to name them "Terry Bradshaw Nagel".

Tom loved Akron, Ohio, where he made his home for over 30 years. One subject Tom's listeners miss on WNIR is Tom's enthusiasm and updates about space. He would let them know about Space Station sightings, and was known to air a commercial just to run outside the station to see it himself. One of his favorite songs to play on his show was "Major Tom" by David Bowie. Tom had a personal, on air relationship with Jay Reynolds, Research Astronomer from Cleveland State University. Their lively conversations included asteroids, new planets, astronomical occurrences, etc. Tom not only had his own telescope to view the Heavens above, but he also enjoyed going to the Astronomy Club of Akron to gaze into the universe through the larger telescopes!

One of Tom's dreams was to be a Grandfather, and after he became ill, he hand to find out that his daughter was pregnant. On November 3rd, 2012, Tom left his earthly body and became one with the universe. Only now, he can fulfill his dream of going into space with the help of Celestis, and he will forever be, in spirit, with his grandson, Elias.

Enjoy your flight into space, Major Tom. "Planet Earth is blue (without you), and there's nothing we can do." We all love and miss you, Tom.