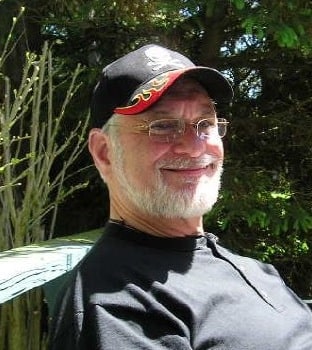 Stephen Barry Ganderson was born in Norfolk, Virginia to Thelma and Leon on May 19th of 1946, and was a larger-than-life figure from the start. He attended the University of Virginia while it was all-male and dated the only woman on campus (the dean's daughter.) A talented boxer in school, he once drank a bit much and beat up a tree so badly that it later died.

After medical school and a residency in Obstetrics and Gynecology at the Medical College of Virginia, he served as an officer in the U.S. Navy. Like Hawkeye Pierce, he served with brilliance and irreverence. Examples include filling out his own son's birth certificate to read "Race: Human" and "Birth Defects: Kind of ugly. Looks like father." to organizing a game to see how close they could get to the nuclear installation before the guards started shooting.

From Huskies to Great Danes, he loved his dogs and was once struck by lighting while walking them. He collected pens and watches, knives and cameras, guns and telescopes. He rode first Harley's, then BMW's. Chocolate was his weakness, spoiling others was his vice, and sleep was his frequently unattainable goal.

He moved around a bit, building a family, building a practice, then settling down in Syracuse, New York. Between 30 years of delivering and examining them, he'd probably seen most of the people in Syracuse naked. He considered his patients as friends, called them "young'uns" and treated them with House's rawness, Hawkeye's humor, and his own southern charm.

Politically thought of himself as a little to the right of Attila the Hun. He identified more with characters like Lazarus Long and Jubal Hershaw than he did the politicians of today. He read science fiction by the stack and his love for gadgets can't be overstated. So he decided he wanted to end up in space even before the technology existed.

He leaves behind his sons Joshua and Adam, his wife Norma, his brother Martin, sister-in-law Robin, and two nephews Justin and Matthew. But that's just the beginning. He brought countless lives into the world, saved nearly as many, and leaves memories, stories, and laughter behind that will circle the earth as he does.