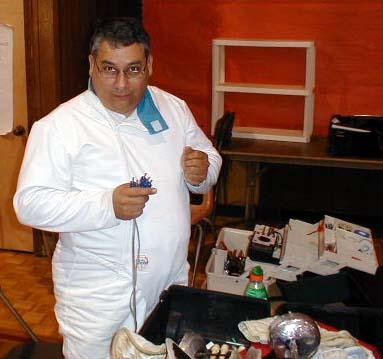 Rod knew that when he passed away that he wanted to be cremated and launched into space. His family is honored to make that happen for him.

Rod passed away at M.D. Anderson Hospital in Houston, Texas on May 9, 2011 after a valiant battle with Leukemia, surrounded by loved ones and close friends. Rod was born March 29, 1954 in Denton, Texas to Leo and Josephine Fleming. He attended Denton public schools, graduating from Denton High School in 1972. He attended Pan American University in south Texas and received a Bachelor of Science Degree in Physics and Astronomy in 1979. He began a career at NASA where he helped to launch their vehicles into space. He retired in 2004. Rod was preceded in death by his parents, and is survived by the love of his life, Betsy Fleming, two sisters, Livia Jones and Lisa Goin, one brother Richard Gary Fleming, his mother-in-law, Marie Fondren, his father-in-law and step mother-in-law James Fondren and Herta Fondren, brothers-in-law, Larry Jones, Daniel Goin, Chip Carroll, and Tim Fondren, a sister-in-law Cathy Carroll, three nephews, Will and Brian Wright, and Joshua Goin, two nieces Lori and Katy Goin, and one great nephew Abraham Goin and great niece Madison Wright and multiple cousins.

Rod was an active member of the Clear Lake Fencing club and won several awards in fencing. Other hobbies included astronomy, paleontology, robotics, wood working, metal working, his love and appreciation for all animals, especially cats and culinary arts.

Rod was a gentle soul with a kind spirit. He was loved very deeply by his family and friends and he will be missed by all.

Rod was my daughter's husband and a good friend to me. He fixed broken things in my house and built functional shutters for my windows to stay the hurricane winds. His wood-working skills were growing as he built a beautiful hall tree and a turntable for the dining table. He was a natural chef, could cook anything, specializing in Mexican, of course. I still think of things to tell him and start to pick up the phone. Last thing I said to Rod was "I love you".

I remember dozens of little things about Rod...he loved science, especially astronomy. He also loved tools and the ability to create or duplicate something out of wood or metal. I imagine that his mind turned almost constantly like the lathe he worked in the garage, wondering what he could build, polish, modify, or just plain rebuild. I was saddened for a number of reasons at Rod's untimely death; my heart was broken for his wife and for his sister Livia. Yes he was a "rocket scientist" and a cosmologist...but more than that, he was someone who had a heart for people too. He's someone I'd like to have had the chance to know better.

Rod Fleming was one of the most kind, considerate, generous, thoughtful, humorous, smart, discerning, strong, selfless, individuals I've ever known. It was always a treat to spend time with Rod, for two reasons in particular... you knew you would be learning something AND you would be laughing about something else. Rod was a one of a kind all round great guy and is missed greatly!

What I remember about Rod is his laugh and that twinkle in his eye, his comfort in his own skin, and his love for everything he was doing in life, from flying to fencing to making life miserable for astronauts in training to marrying his wife. And he shared it all with others (except for maybe that last part). We all miss him.

If you said to me what picture comes to mind when I'm asked about Rod in college, I would answer, Rod half laying and half sitting on his bed, with his back propped up by several pillows, a book in one hand (usually physics, astronomy, space art or science fiction), a cigarette in the other, with a glass of ice tea (he made it by the pitcher full) on the night stand. I would stick my head into his room and ask if he would like to argue about something, to which he would sit up, pull himself off the bed, wander into the living room, sit at the dining table and proceeded to discuss the which for, of the here to, of the here now. Talks that I greatly miss now.

Rod had an opinion on almost everything. I loved to talk to him as his interests were wide and his knowledge about his subjects quite good. He could argue a point intelligently and without personal rancor. AHHH! We Scientists love this and live to interface with someone like him. He left a vacancy in my personal life that no one else has filled. I find that his level of intelligence is rare. We corresponded by e-mail when I came back to Corpus Christi, and I was always astounded at how very well he could write. More than once I told him he should be writing for publication.

The picture of Rod that stays with me best is the time he was giving a sword fighting demonstration at the recreation center on site. That is the way I remember him best. White jump suit, helmet, with sword in hand. Having a great time.

Dance among the stars.

You are sorely missed.