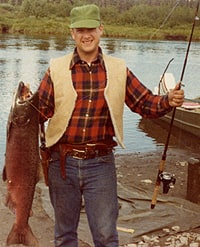 An Alaskan Certainly, An American Always

Robert C. Anderson (Bob) was born on March 2, 1947. The middle class family of Robert and Betty Anderson made their home in Princeton, New Jersey. Bob was the Anderson's first child, with two sibling brothers, Mark and Tim, and two sisters, Pamela and Sharon.

Bob's childhood and adolescent years were happy times with a strong Christian family that focused on their children's welfare and future. They were correct in seeing a bright future for Bob, who early on demonstrated a flair for academia. This proved to be a consistent trait that not only benefited Bob for his entire life, but also produced tangible and objective results for the many with whom he was associated.

The most important factor in Bob's life occurred during his enrollment at Lafayette College. Bob emerged from formal schooling with a Bachelor of Science Degree in Mechanical Engineering and a commission as a Second Lieutenant in the United States Army. Far more importantly, Bob had met Deborah Greenleaf (Debbie). They were married the day following his graduation, on June 7, 1969.

Bob and Debbie's entire 33 years together were marked with happiness and a dedication to one another. They stood as one facing life's challenges and blessings. In the earliest days of their marriage Bob was required to attend specialized military training. It was during this time that a son was born and christened Robert C. Anderson, Jr. Following this was a posting to the 11th Armored Cavalry Regiment at Fulda, Federal Republic of Germany. It was during this period that the Anderson's second child was born, a daughter they named Heather Ann.

The young man from Princeton was now a professional engineer, a military officer, a husband and a father, and he thrived on it. Always the talented problem solver, he accomplished his military requirements with a flair.

Bob Anderson professed a love for his family. The needs of Debbie and the children were the highest priority then and always. No one doubted that he could and would assume the protector role if need be. He loved his country and all of nature. His appreciation of nature's beauties was often spoken in terms reflecting divine creativity.

Bob was an accomplished man in many ways. He was also sensitive in every sense of the word. When military duties brought Bob and his family to the Great Land of Alaska he was struck with the mystique and grandeur of the state. Bob was assigned to a unique Army organization with the mission of technical work with new types of military equipment. By necessity this work was done in remote areas.

Bob was so taken with Alaska that when he saw an opportunity to secure a position with the military organization as an engineer, he decided to terminate his active duty career. The reality of this decision was a long term commitment not only to the job but to the Great Land. The mere thought was an elixir to Bob. He was known to say to his friends or anyone that he could get to listen, "My job -- Wow, I shoot guns, blow up things, drive tanks, all in a setting that should rightfully be a national wilderness park."

When Bob Anderson was taken in that instantaneous flash, Debbie, his family, his friends, and his colleagues lost a great deal. Lost was a man of integrity, wisdom, loyalty, and humor. Yes, humor. This man, with so many capabilities, insisted on including humor in any and all events whenever possible.

All who knew Bob Anderson, the man, would agree that his last thoughts were of Debbie, his wife of 33 years, their children, Robert & Heather and son-in-law Bill, and their grandson, Tyler.