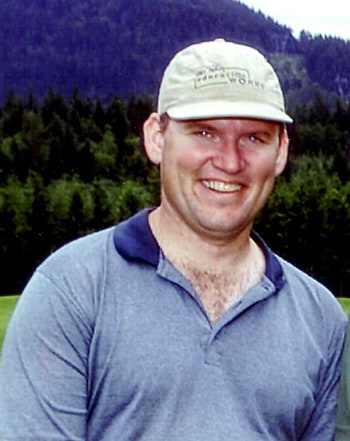 Every day is Christmas!

This phrase sums up the spirit of Paul Joseph Randles and his attitude toward life. Paul showed us the most important thing in this world is to know how to give.

Paul, loving husband of Katty Pepermans, passed away on February 10, 2003 at his home in Kent, Washington. He was 37 years old. Paul was affectionately known as "Papa Christmas" by his many friends and co-workers. He is famous for playing Santa Claus at holiday parties and for having an always-full stocking of candy at his desk.

Paul was born in Seattle, Washington on December 16, 1965. He graduated from Kamiakin High School in 1983. He then went on to attend college at Central Washington University where he earned a B.A. in English.

Paul was an avid board game player as well as experienced game designer. His award-winning game Pirate's Cove was one of the top 10 board games in Germany in 2002. Paul had a successful career at Wizards of the Coast where he worked on such games as Robo Rally, The Great Dalmuti and Xena & Hercules. After leaving Wizards, Paul went on to found his own game design and brokerage firm, Randles Games. He leaves behind a legacy of games such as Key Largo, Pyramids of Egypt and Space Race. He also brokered games created by other designers which included Monsters Madness.

Paul loved playing golf in his free time. As his illness progressed and he was unable to play golf outside, he enjoyed taking on his friends in a game of "Tiger Woods Golf" from his bedside.

Paul had a special place in his heart for his cats, Rocky & Sylvester. They kept a bedside vigil with him as his cancer treatment began.

Paul's driving goal in life was to make people happy and help others to live positively. Everyone who came into contact with Paul was touched by the generosity, vitality, strength of spirit and dignity he showed throughout every phase of his life. Paul showed he cared through the overwhelming compassion of his great big bear hugs. No matter what his situation, he always had time to listen to others and give advice when needed.