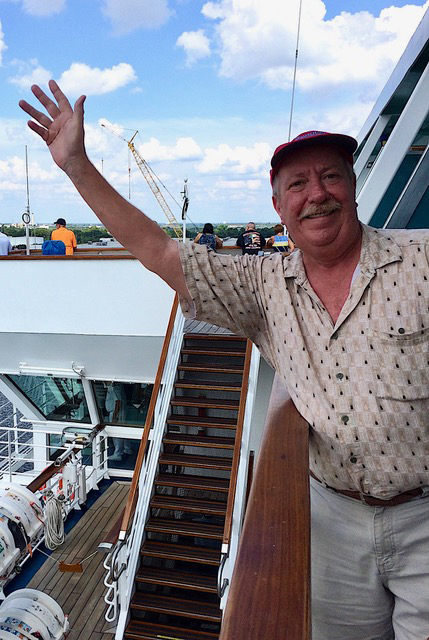 Mike was born January 28th, 1957, and grew up in West Palm Beach, Florida. He was adored by his parents, Lillian Ruth Pittman and Robert Baldwin of Lake Park. Mike was laid to rest near his parents in Royal Palm Cemetery.

Mike founded his own business, Mike’s Computer Marketing, in 1987 to help local businesses grow through advertising.

Mike had a passion for scouting throughout his life. He was a proud member of the Order of the Arrow since his youth, and earned his Wood Badge as an adult to strengthen his scouting leadership. Mike educated others on “Leave No Trace” principles of experiencing nature while minimizing impacts to the environment.

Mike always loved music. He was second-chair cellist in the orchestra at Suncoast High School, and throughout his life, he was an avid concert goer, attending large festivals and supporting local bands.

Another one of Mike’s biggest passions was space. He spent every night stargazing and taught his family and friends about the constellations. In addition to the stars, he loved meeting astronauts and watching space shuttle launches. Throughout his life he attended more than 20 launches in Cocoa Beach, Florida and watched countless others from his yard in south Florida. His love of space was contagious, and he encouraged everyone he knew to teach their kids about space in hopes that it would make the world a better place.

Mike is survived by his two children, Bob Baldwin and Ashley Baldwin, whom he raised in Jupiter, Florida. Mike was always their biggest fan, encouraging them to pursue their dreams and praising their accomplishments along the way. Bob became a software engineer, lives in San Francisco, and is married to Merielle Cruz. Ashley became an artist, lives in Munich, and is married to Brandon Harris.

Mike is also survived by his brother, Mark Baldwin, who he was close with throughout his life and lives in Port St. Lucie. Mike is also survived by his cousin Keith Campbell, who was like a second brother to Mike, having lived within a mile of Mike and Mark throughout their childhoods. Since the 80s, Keith and Mike have lived down the street from one another in Jupiter. Keith is married to Lynn Campbell, and they have two children, Kristin and Matthew.