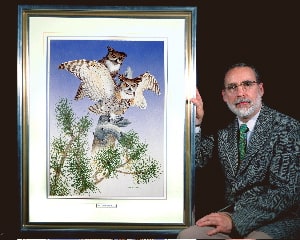 Mel Hunter "always drew" as a child, favoring such forms as airplanes, which he drew and assembled as wood models. He was brought up by his salesman father, grandmother and aunt from the age of two. His mother had been banished from the family when he was two, for the unspeakable crime of defying her husband's wishes and swimming at a YWCA pool. Mel was harshly treated by father and grandmother -- who knew how to use a strap -- for his precociousness.

Mel entered college a year early (1944?). After college, he held a variety of jobs, from pumping gas to writing copy for an insurance firm and selling insurance on a Fair circuit. Eventually he traveled to the West Coast in search of employment, landing a job as a draftsman at Northrop Aircraft Corp. in California.

In 1950, Mel made up his mind to pursue a career in art and decided to teach himself illustration skills, which he did after work, on weekends and all other spare time, working at his kitchen table. Following three years of steady effort, the self-taught artist sold his first color cover idea to Galaxy Magazine. He also talked himself into a job as technical illustrator at Northrop, where he painted pictures for the Pentagon of advanced interceptors and pilotless bombers in hypothetical combat situations. During this time he was a member of a group of science fiction greats such as Isaac Asimov, Sprague deCamp, Robert Heinlein, Fred Pohl, Lin Carter, L. Ron Hubbard and John Campbell, Jr. among others.

A year later he resigned and moved to New York as a freelance illustrator for magazines and books. He launched a career of scientific illustration, doing such technically accurate subjects as 26 paintings of celestial objects in 1964 for the Hayden Planetarium and later recording such advanced technological developments as drawing board jet bombers, missile launchings at Cape Kennedy and a revolutionary lunar manned base. His scientific drawings and paintings appeared in dozens of major publications. In the early 1960s Mel also wrote the documentary text and shot photographs for two successful books of photojournalism published by Doubleday: The Missilemen and Strategic Air Command.

He flew with SAC crews, talked with the pilots, stood on alert with them in Spain, flew a refueling mission about the Arctic Circle, sat in a honeycombed blockhouse observing the countdown on an Atlas SM-65, and traveled more than halfway around the world to get the full story -- in text and photograph -- of the men, the weapons and the strategy of Strategic Air Command. (At some point in the late 60s, Mel owned and distributed the Cessna/Wren seaplane. The North Star Airpark in Brooklyn was its location.)

Mel spent 15 years traveling the world on assignments as a major magazine and advertising illustrator specializing in the physical sciences, astronomy and advanced space and weapons technology. He produced over 900 drawings and paintings in those fields.

After 17 years of successful science illustration, Mel moved from New York City to Chester, in southern Vermont during the summer of 1967. He established his home and studio in a farmhouse high on a forested hill where he began depicting the land, animals, birds and changing seasons of his rural, semi-wild environment. He told of having to wear gloves to eat dinner during that first winter, since the wind blew hard through cracks in the walls.

The following year, Abercrombie & Fitch Galleries and the Massachusetts Audubon Society commissioned Mel to do a series of more than 130 watercolors of "Birds of the Northeast" and in 1970, he signed a contract with World Publishing Co. for the development of a series of 13 ecological books for children. Titles dealt with the beginning of the earth, mankind, plants, birds, mammals and insects. He produced an entire ecology calendar for General Motors in 1974.

For the World project, Mel pioneered techniques for pre-separated color drawings using DuPont Mylar as a drawing surface. This process greatly reduced the cost of color illustrated books and furthered his career by opening the way for his later fine art lithography prints. However, over the next four years, he created 54 editions using traditional stone lithography techniques.

In 1975, Mel and his then wife, Nancy moved to Grafton, Vermont, a foundation-funded, revitalized community where he founded Gallery North Star and Atelier North Star inside a century-old New England clapboard house that used to be known as "Uplands Gallery." This also became his home. Over the next eight years Gallery North Star successfully featured prints from his then 82 limited editions and selected work from other artists. Mel did his own printing in the Atelier, at first using the traditional technique of drawing on thick blocks of Belgium limestone. This meant hauling stones, which often weighed 400 pounds, in the trunk of his car to stone printing shops in New York. He made 20 editions in joint effort with Bank Street Atelier, Shorewood Atelier and Geo, Miller and Son of New York City.

In 1976, a long-experienced and reliable stone printer-craftsman accidentally ruined an image by adding a few too many drops of sulfuric acid to the preliminary etch on the stone. The subsequent editions were coarsened and all had to be destroyed. It occurred to Mel that his work on Mylar for the book project could be adapted to the more complex and demanding images of his current lithographs. He equipped his research workshop to perfect his use of the revolutionary Mylar Method, using a Charles Brand hand-cranked press. In the same year, his #55 edition "High Meadow, Low Meadow" was his first full-color Mylar edition, produced at the American Atelier of Circle Graphics in New York. Mel published a lengthy, photo-illustrated article in American Artist Magazine, entitled "Revolution in Hand-Drawn Lithography" which caused the eruption of an intense dialogue in the lithograph world. A joint public statement of affirmation from artists Jamie Wyeth, Lowell Nesbitt and others who were using the new method as well as supporting statements from two Ateliers in New York quelled the debate. Today, artists the world over use the method.

In 1984, Mel's seminal hard-cover textbook The New Lithography appeared and is now a collector's item.

In 1983, Mel moved his Atelier North Star to Burlington, Vermont, where he produced well over 100 new editions using these advanced methods. He acted as Master Printer in the production of more than 200 editions for other artists and print publishers. Until 1989, Atelier North Star was operated as a high quality production shop and as a teaching facility where a number of shop assistants and work-study students from nearby University of Vermont art classes were able to study how the Mylar techniques work in the real world of production printing.

After closing the Atelier, Mel continued to act as Master Printer for his own editions and those of other artists, using a prestigious printing facility in Northern Vermont. Although diagnosed with Parkinson's Disease in the 1990s, Mel continued working on new editions of lithographs, acted as Master Printer for other artists, and established a line of greeting cards reproduced from successful editions. He founded Polaris Press, Inc. to function as a publisher/distributor of Mezzographs, a special form of original lithographs, conceived by Neil Harpe, and technically developed by Mel. He began publishing Printthoughts, "a journal of commentary on the besetting problems in the printed image field.” He also founded The True Original Printmakers Association (TOPA) in 1996, dedicated to the "artist as the focal point of true original graphic printmaking," designing a step-by-step process for documenting the creation of any true original graphic print edition.