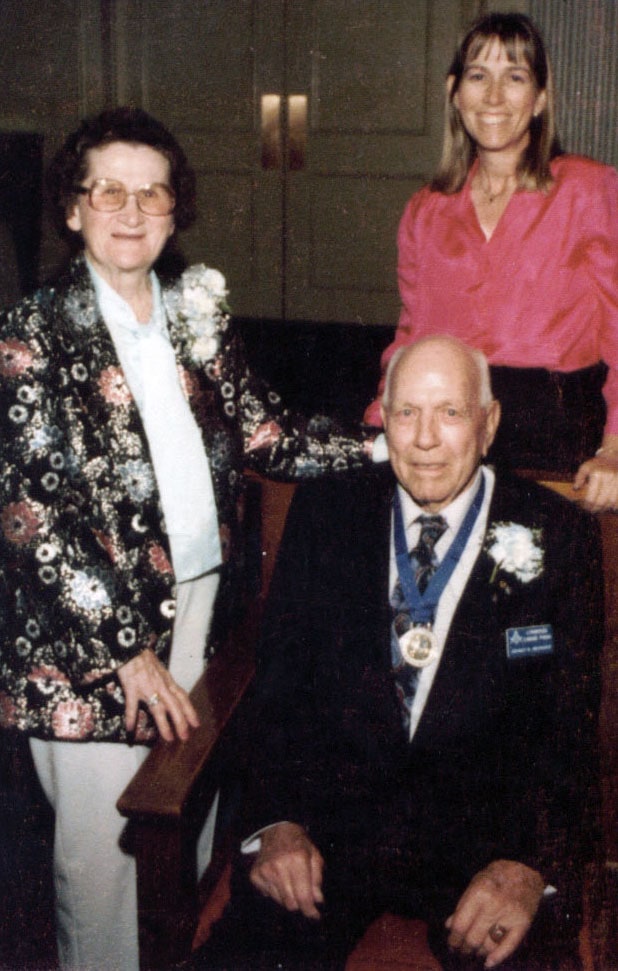 Mary revealed -- in her late eighties -- that she was a closet "Trekkie" and a Romulan to boot.

Both of them thought it would be great fun to fly into space, so they are -- the closet Trekkie and the fisherman with his eye on the stars.

Ernie was a second generation Californian, born on Lima Street in Los Angeles. He was a mechanic and owned a Chevron one-pump service station on Vernon Avenue. His parents lived in a little house in back of the "shop."

Mary was born in Wauwatosa, Wisconsin. The family soon moved to Wausau, Wisconsin, then to Missouri and finally to California.

They were married in 1942, and Papaz enlisted in the Navy as World War II began. He spent four years as a Sea Bee on Espiritu Santo Island in the New Hebrides (but apparently didn't meet "Pappy" Boyington or the "Black Sheep Squadron" which was based on the island). Papaz was sea-sick all the way over and all the way back. He got sea-sick on a pier.

During the war, Mamaz worked as a real estate broker in Huntington Park, California, in the daytime and a shift supervisor at Rheem. They also bought the only home they ever lived in on Bullis Road in Lynwood, California, in 1942. I found her notes showing all the mortgage payments she made while Papaz was at war. I remember when they burned the mortgage.

Before she married, she went to the University of Southern California intending to become a public school music teacher. However, WW II was looming and her brother Frank wanted to become an Air Force officer (he retired as a Brigadier General) and that required a college degree. Mamaz was forced to drop out of USC and earn her broker's license. While she attended USC, she took part in the opening and closing ceremonies of the 1932 Olympics in Los Angeles. I still have her medal.

Papaz came back from the war, settled in and started work at the shop on Vernon Avenue. He also raced and "wrenched" (acted as mechanic) Model T Midgets and Crackerbox boats (a two-man inboard boat) on Lake Elsinore when it was still considered a bottomless lake. He raced all over Southern California.

Papaz finally decided to close up shop and go to work for someone else -- General Telephone -- as a mechanic. He retired from there. GTE contracted with North American Aviation, which had a huge facility in Downey, California, to repair fleet vehicles. One day, he learned that the Apollo 11 capsule was on display and took me to see it. With no advertising, just word of mouth, the line of people who wanted to see the capsule stretched completely around the North American facility.

After he retired, Mamaz and Papaz took to RV-ing and bought a 17-foot Lazy Daze motor home. They must have put at least 300,000 miles on that thing.

Mamaz was notorious as a "cheap drunk." She literally got loopy when she opened the bottle. The photo shows her draped across the Lazy Daze's door with a glass. Papaz took to fishing a little, as his photo shows. What they really liked to do was can. The garage was filled with canned fruits, vegetables and all the stuff to do the canning. Once Mama bought a little box of cherries to snack on, but couldn't find them at home. She found them months later -- Papaz had canned them.

He also became active in the Free Masons and was awarded the Hiram Award for his services to the chapter and the community. One photo shows us the day he got the award.

From their 'Dotter' Linda 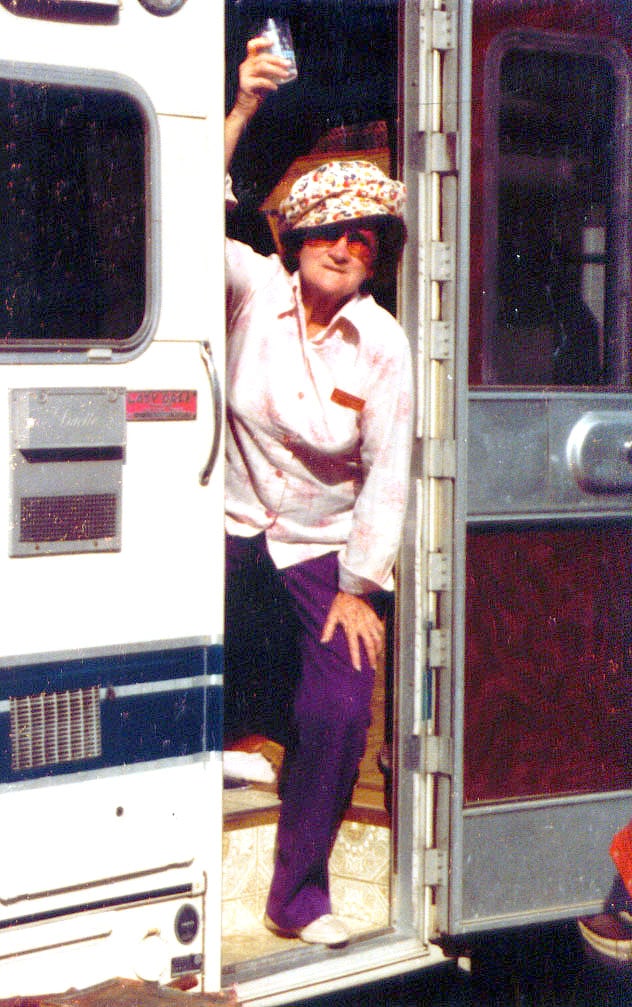 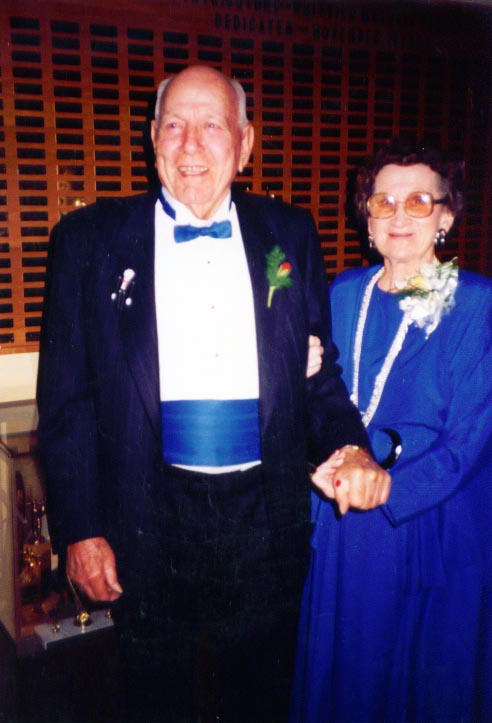 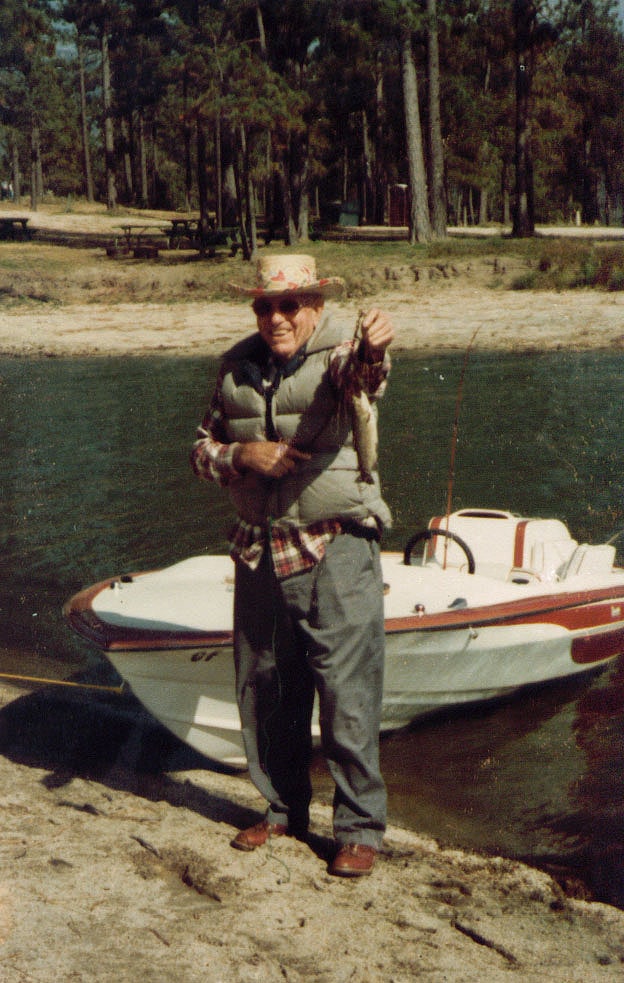