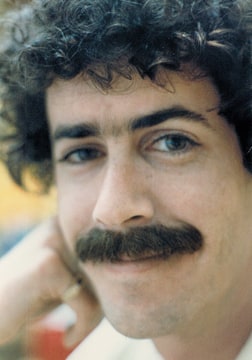 Not just to touch the stars, but to move between them and past them.

My Dad, Mark, was born in 1955 in Cincinnati, Ohio, but that doesn't even seem the way to start.

He was injured badly in 2005. He fell and hurt his head and there was some lasting damage done. He had a great deal of trouble walking after that and would sometimes get so tired. But for the entirety of his life, before the injury and after, he was a man who went exactly where the wind blew him.

After his injury he decided, completely on the spur of things, to visit Antarctica. A plane flight, a cruise around South America and a plane flight later he ended up there. In all that cold. Cane in hand and exactly where he wanted to be. My Dad, fifty years old and still skinny from the accident, knew that he wanted to do this thing. This ridiculous, wild and spur of the moment thing. And he did it ... With a quick word to his kids, "By the way, I'm going to Antarctica."

He had a conversation with my brother once, about what he'd do after he had died, what he'd want done. He jokingly mentioned the idea of being fired into space. He'd heard that there had been some folks that had that done, and he thought it was a good idea. All this was said with a chuckle. So we decided that it should happen. He'll be in good company.

My Father passed in June of 2006 still in recovery from the accident in 2005, and still living his life as much as he could. That was our Father. And I hope we do him proud. Fifty years was far too little life to live.

And once you have tasted flight,
You will walk the earth with your eyes turned skyward,
For there you have been and there you long to return.