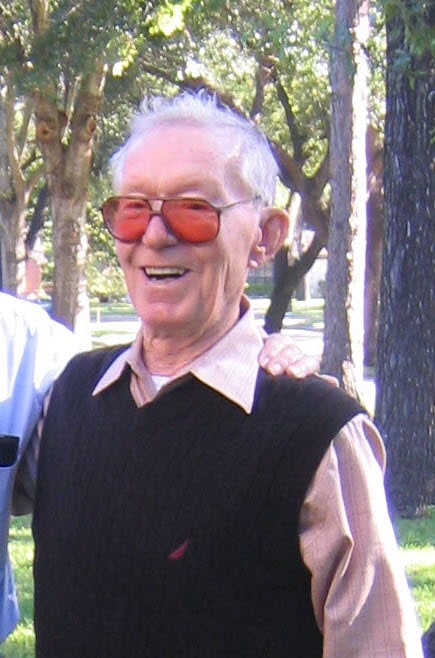 My father, Keith Irl Roper was born in the small town of Burley, Idaho on November 12, 1919. He died April 22, 2007 at 87. He was the middle of two brothers, Bill and Dan, who were then followed by a sister, Joy. Born with a twinkle in the bluest of blue eyes, he and his brothers have regaled tales of his tomfoolery as long as I can remember. From watermelon fights to dipping a cute little girl’s piggy tails in stinky flower water (he didn’t know the water was putrid and he was truly sorry), whatever high jinks were brewing, Dad was most certainly in the thick of it. One of the things we all loved about him was he almost always had a little something up his sleeve – and the absolute worst at keeping it a secret! What a hoot he was!

Dad enlisted in both World War II and Korea serving with great pride and distinction. He was a 2nd Lt. in Korea, an Intelligence Officer assessing photos of bomb damage. He served in the 31st Photo Rcn. Sqdn. in Normandy, northern France and central Europe. Like many of our men who have served, he didn’t speak often of his experiences, but one of my favorite stories is that of my father displaying a P-38 under the Eiffel Tower at the end of the second war. At the very epicenter of the Eiffel Tower there is a small platform. You can stand on it and look straight up into the dizzying array of the tower’s structure. It is one of my favorite places in the world, partly because I can just see my father there, and partly because my husband, Rick, indulges me this lovely pleasure.

My life has been blessed with two great men. My father was the first. He was honorable and hard-working, a man of clear thinking and integrity. His steely grit, strength and determination seemed boundless. Rick (the other great man in my life) has the honor of being Dad’s favorite mountain climbing buddy. They’ve spoken of their adventures over the last 35 years (and I swear their stories keep getting bigger, better and the mountains higher) but there were two constants. First, they always made it to the top and second, Rick always jokingly claimed he watched my father’s backside – both up and down – each and every time. That so-identifiable-long-Roper stride carried my father to the top of all 54 of Colorado’s 14’ers. Their last climb together was Mt. Mitchell, the highest point east of the Mississippi and Dad was 80.

Upon returning from Korea, my father earned his PhD in Chemistry and was employed by Martin-Marietta developing the Titan missile. He was very humble about this achievement but we secretly enjoyed bragging that he truly WAS a rocket scientist! A magnificent mind and independent thinker – and never one to balk at a challenge – Dad resigned his position from Martin, became a professor of Chemistry and purchased a 360-acre farm in Boulder, Colorado. Not ever having farmed before and exploring new territory was never an issue. Dad reinvented himself several times, and with a little luck and perhaps a little touch of Midas, my father ultimately subdivided the farm, invested in real estate and retired at 55.

Married for nearly 60 years to Ginny, they raised two daughters, Nancy and Gina, who (in their impartial eyes) could perform wonders in horserings. When we were little, Dad would tell us a story in which he had rescued Mom from an Indian reservation. He, of course, was the dashing cowboy and Mom was the desperate “Princess Trickling Water.” I was about 10 or 11 before I figured that one out and it makes me laugh out loud to think about it. Their labor of love and devotion helped mold their family for three generations.

Other members of Dad’s family with fond and loving memories: Granddaughters Kelly and “Jeffy,” who will long remember their “Pop-Pop” for his crazy-wild wheelbarrow rides and convinced them he was the guy who made the moon whole every month; his first great-grandchild, Cheyanne, who had the good fortune to be a little blue-eyed girl with blonde piggy tails and he got to fall in love all over again; Jackson, with whom he would sit next to for hours and comfort; Taylor, who just might become the pilot he once dreamed to be; Alec, with his amazing quickness and mind for numbers; and Tucker, the last little fellow to capture his heart and, with the wisdom of a 3-year old, believes that Pop-Pop is on the moon.

Andy, my daughter Jenn’s husband, won my father over with his homemade biscuits and Dad took such a shine to Kelly’s husband, Brannon, that he kept asking what was taking him so long to propose (he never was one to mince words).

This family is my father’s – our – richest legacy and we are all proud to claim his blood.

I think it is so fitting that my dad’s last great adventure is aboard a rocket named The Explorers Flight and look forward to its launch.

He makes me smile when I think of him, but I miss him. I always will. We all will.