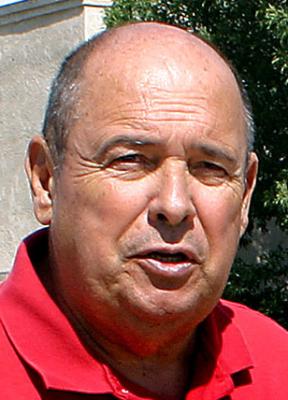 Judd Leland Nordyke of Hatch, New Mexico passed away peacefully on April 12, 2013 with his loving family by his side. He fought a short but valiant battle with cancer. He was a remarkable man and will be sadly missed by all who knew him.

Judd was born October 11, 1940 in Ames, Iowa to Max and Lenore (Leland) Nordyke. He graduated from Villisca High School in Villisca, Iowa in 1958. He served honorably during the Viet Nam conflict aboard the USS Hamner (DD718) as Machinist Mate from 1960 to 1964, receiving: the Armed Forces Expeditionary Medal for the Taiwan Strait, and again for Quemoy; the Viet Nam Service Medal; and the National Defense Service Medal. Judd continued his service in the Naval Reserve until 1977, earning the rank of Machinist Mate 1st class and receiving the Naval Reserve Meritorious Service Medal. Judd was sent to Washington, DC to do his two weeks of Naval Reserve Temporary Duty for several years at the Smithsonian where he catalogued and archived historic items.

After his Navy service, Judd joined his brother Craig at New Mexico State University. There he met his wife, Marcia Crystal, and they married in 1968. He received his BA in Education in 1970 and his Master's Degree in Administration in 1975. He always said he was sent to Hatch to do his student teaching and "forgot to leave." During his 32-year career, he taught Civics, US History, Southwest History, and computer science, and spent many hours on the road with his students as an Activity Bus Driver. When the State of New Mexico made it mandatory that New Mexico History be taught in all school districts, Judd was assigned the task for Hatch. He researched and wrote his own history book as there was not one available at the time. He loved taking the students on field trips and having "hands on" lessons about how and when New Mexico developed and became a state.

As Student Council Sponsor, he arranged for the students to act as pages at legislative sessions for several years. Since many of the students he supervised had never been out of the Hatch Valley, Judd used the opportunity to provide exposure not only to governmental process but also to a more varied social experience, by arranging for the students to have meals at restaurants and to dress for the occasion. As class sponsor over the years Judd put on many plays, cookouts, charity drives and really enjoyed working with students to build bigger and better homecoming parade floats. He is remembered for coming up with the first mechanical float -- a bear being shot out of a cannon over the goal posts -- and for a self-propelled locomotive with real smoke.

He was the last Hatch Junior High School Principal and the first Hatch Middle School Principal when the District made the change. He also held the positions of Athletic Director, Transportation Director, and Food Services Director during his years with the Hatch Schools. He spent much of his time working with the state legislature, lobbying for funding for the school district, and was paramount in the funding and building of Hatch Middle School and a new Garfield Elementary School, in addition to beginning the process for building a new Hatch High School. He retired as Associate Superintendent.

Judd put his life into the Village from the day he entered the Hatch Valley in 1970. He was a great Hatch Chile Festival supporter acting either as chairman or committee member for 38 years. His first major project for Hatch was to get a public swimming pool for Hatch's children. He and his students worked for years with the community, the County and the New Mexico state legislature to secure the funding needed for a municipal pool. He believed strongly in the need for a public pool to provide a safe place for children to learn to swim and to enjoy the summer months while staying out of trouble: He believed that a public pool provided a service to the community by reducing the number of drownings in irrigation ditches and the Rio Grande River. After 40 years, his perseverance came to fruition as Hatch's "Judd Nordyke Municipal Pool" was opened for business in 2012.

Elected as Mayor of the Village of Hatch in 2002, Judd was returned to office for two more terms, in 2006 and 2010. During this time he worked with FEMA, the State of New Mexico and Dona Ana County to ensure Hatch's recovery from the Flood of 2006. In the course of his careers with the Hatch Schools and the Village of Hatch, Judd was responsible for establishing Internet capability throughout the entire Hatch area by way of town-wide Wi-Fi. His goal was always to better the quality of life in the Hatch Valley, and with his experience dealing with the state legislature while working for the school district, he continued lobbying for funding. His efforts are responsible for the Andy Nunez Health Department Building as well as the Hatch Judicial Complex Building. A Hatch Municipal Golf Course was already in the mill as he worked with BLM for a land exchange. He was also a great supporter of Hatch's Spaceport America Economic Development concept and worked hard to make sure Hatch's name stayed in front of the State of New Mexico and the Spaceport Authority.

While in the classroom, Judd was appointed to the position of Hatch Municipal Judge -- a position he was elected to and held for 25 years -- and served many years as an officer of the Hatch Volunteer Fire Department. He was an officer of the South Central Council of Governments; a member of Hatch Valle Verde Masonic Lodge and then transferred to the Kingston Masonic Lodge # 16, AF&AM Hillsboro, New Mexico when the Hatch Lodge had to close; Hatch Chapter 52, Order of the Eastern Star; El Valle #4308 Fraternal Order of the Eagles, Elephant Butte American Legion Post, and was a life member at large of the Veterans of Foreign Wars.

During Judd's childhood, his family vacationed frequently on Lake Okoboji in northwestern Iowa, and Judd considered himself a "lake rat." He loved the water and he loved the outdoors. He particularly enjoyed spending time with his family and friends. Judd spent many hours with his family, extended family and friends on Caballo Lake boating, picnicking and teaching everyone he could how to water ski. During his many hears in New Mexico, he familiarized himself with the entire state, and particularly the southwestern area. He conducted guided tours for family and friends of the Gila area and proved himself extremely knowledgeable about the entire area. He and his family visited Lake Valley often, and his daughter learned to dance there. He fell in love with Lake Powell in Arizona and Utah and spent as much time as he could on the lake, camping out of his own boat or on a Lake Powell houseboat with family and friends.