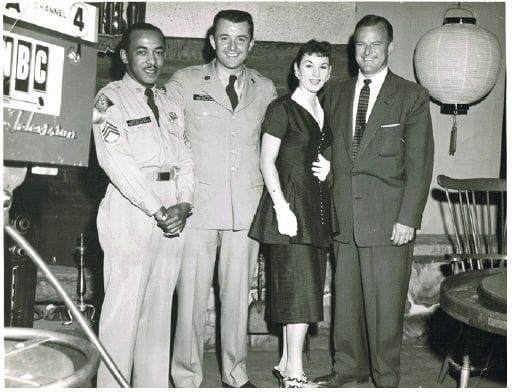 Mid-1950's, Los Angeles radio host John "Johnny" Ryan, died December 24th, 2004 in Duarte, California, from congestive heart failure. He was 74. As a sergeant in US Army Recruiting, the Brooklyn-born Ryan hosted the radio programs "The Army Show" (1954-56) and "Dimensions In Music"(1956-57), both of which featured a blend of top 40 hits and celebrity interviews. Airing weekly on KMPC, the shows were sponsored by the US Army to promote enlistment, though Ryan's trademark, ad-lib style was a break in tradition from the dry, formal programs Army Recruiting previously broadcast. The popularity of the shows, and their success in enlisting new recruits, allowed Ryan the freedom to format the broadcasts more like other commercial radio shows of the time.

After broadcasting, Ryan turned his attention to writing short stories, novellas and poetry. He was also an accomplished multi-media artist.

Originally Published in the January 17, 2005 issue of Daily Variety
(Provided by the Family of John T. Ryan)

The eldest of eight
He carried the weight
To support a family reliant
With Army, radio,
And strong personal views
It was common that he’d raise a brow
Still his life traveled on
To wed Alice Beck
And four wee ones soon came to follow
There would be poetry & art
T-shirts and pamphlets
Newsletters and audio tapes
He was busily seeking
Whoever would listen
About a planet we would have to escape
Although tainted with moments of madness
There was quick wit and certainly charm
A strange and odd combination that always kept him moving along
Thin crusted pizza and bread sticks
Turkey stuffing
And creamy mashed spuds
Delightfully fluffed Eggs
He’d scramble
But still he would keep rambling on
To alarm he would screech
An annoying harsh pitch
He’d beat on his chest just because
He jogged through the house
Kneeled down to write
And viewed TV, sipping beer without pause
Loved calling Sparky “Little Bastard”
Donned a baseball cap each day
To be the center of attention was the glory that he craved
Didn’t care he was different
Didn’t care he was odd
Didn’t beat to no drum but his own
What really mattered
Was the family he crafted
A family united and bound
So with memories and laughter
We remember a “character”
Whose space ship has now left the ground.