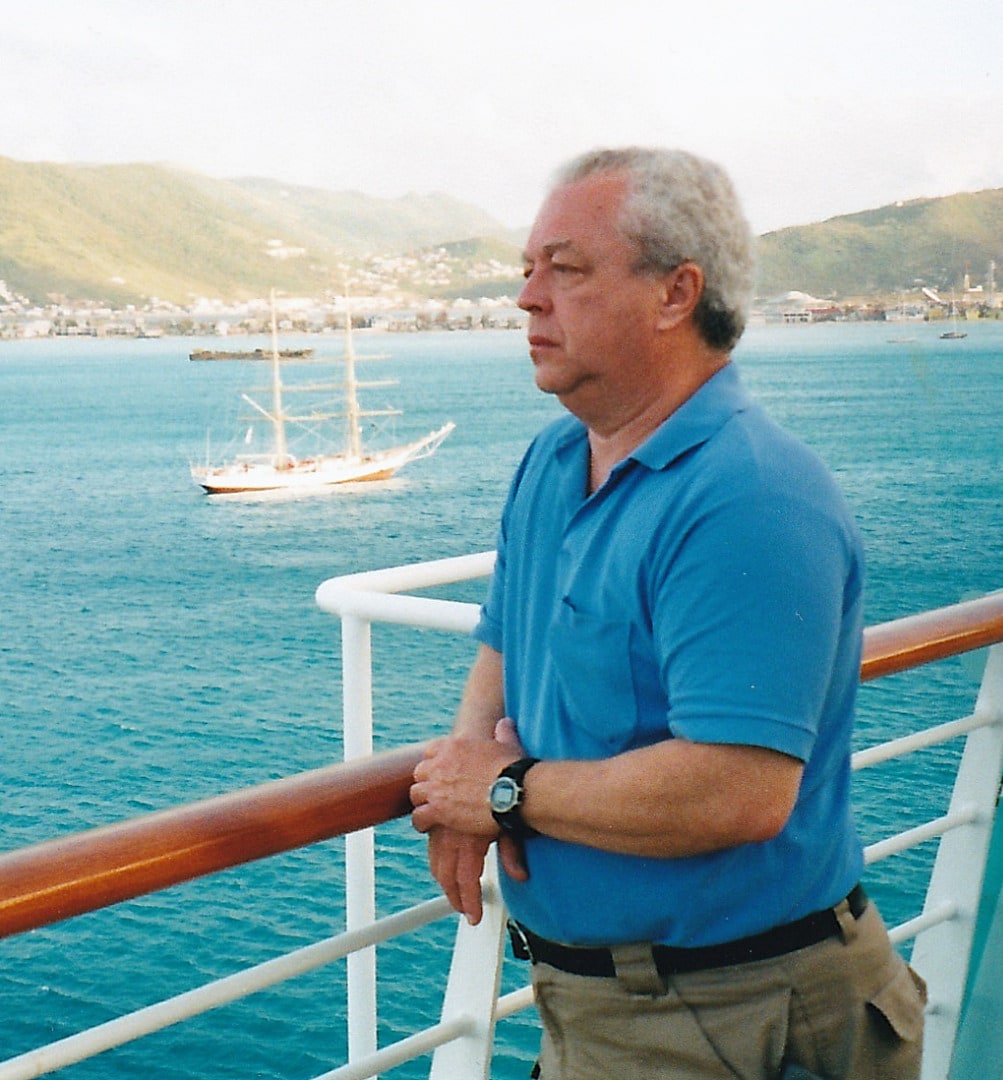 John was born in Concord, North Carolina, November 20, 1941, to Phyllis and Milton Whytsell.  According to his parents, he never stopped moving or seeking answers.

John’s Dad was a Navy photographer and his Mother worked as a secretary.  After his Dad got out of the Navy, there were several moves: Chattanooga, Tennessee, Atlanta, Georgia, until they finally settled in Greensboro, North Carolina.

His sister, Anne, was born six years after him, the pretty, clean child that he never was: pretty blond curls bouncing all over her head.  John cared little for appearances and, despite his Mother’s best efforts, was usually barefoot and dirty.  He was always trying to invent something or build something or climb something.   Since he was born during the second world war, certain important foods such as peanut butter were rationed.  For an energetic boy like John, this was a constant worry so he decided to hoard a little.  When his Mom brought home a loaf of bread and a jar of his favorite food, he grabbed a jar of jelly and made PB & J with the whole loaf of bread.  The rest of the family was not pleased.

As he grew, he never lost that thirst for knowledge, not in school but through documentaries or trial and error; always confident that he could figure anything out.  Most of the time he could.  If he couldn’t, he kept going to the local library to get more information.

During high school, he would visit the campus of the local Women’s College.  Ever needing males for their drama department, he was introduced to theatre, which became his new fascination.  He found that he was really good, not only as a male actor but at building sets and setting up the lighting.  That began his lifelong dedication to and fascination with, electronics. He was constantly getting shocked but just figured that it was just part of the learning cycle.

During high school, he worked part time at an auto shop, learning how to repair cars, mostly how to keep his old corvette running.  This kept him in spare change and allowed him to attend the Elkins Institute of Electronics after High School graduation.  He had an affinity for electronics and was asked to teach in the private school in Atlanta, where he met his future wife, Marie.  They met on New Year’s Eve and were married March 27, 1964.

Atlanta was a thriving city with a never ending adventure for the young couple but a few months after they were married, John was asked to transfer to the new school in New Orleans.  This was met with an excited agreement from both and they packed all that they had both accumulated into a U-haul and an Austen Healey.  Their old alley cat traveled under the truck seat and their Collie slept on the jump seat in the Healey.  It was a long drive.

In New Orleans, they settled down in an older section of the city, in the midst of people whose ancestors migrated from Arcadia, locally referred to as, “’Cajuns.”  Marie got a job with the New Orleans Board of Trade and John taught electronics.  As parking fees were astronomical, they bought an old Vespa Motor Scooter and wove between traffic through town, Marie in suit and high heels, John in suit and tie.

The parade route for Mardi Gras passed right under the second floor window to the school so there were a couple of fun years running downstairs for doubloons and beads then running back upstairs to watch the parade.  He and Marie spent many nights exploring the French Quarter and watching the sunrise while sitting on the bank of the Mississippi.  During one really bad hurricane, Betsy, they kept coffee and sandwiches available for tired police officers taking a quick break.

Several of John’s students were policemen so John was introduced to undercover work in the City of New Orleans.  He spent several nights out with a new friend and became enamored with the work.  He soon resigned from teaching and became a policeman, mostly assigned undercover.  During off hours, he and Marie sailed their little sailboat, nothing more than a surfboard with a sail, on Lake Pontchartrain.  Since there were many dunkings, Marie asked him where he had learned to sail.  He told her that he had read all about it in the library.

Although New Orleans Policemen were not subject to the military draft, John’s draft board was in North Carolina and they were not concerned with the Louisiana draft exemptions.  John was accepted by Naval Intelligence, his first choice, but the school’s class availability did not fit into the draft board’s schedule so John signed up for Army Security.  After training, John taught electronics for the next three years at Fort Devens, Massachusetts. There, he worked part-time as a radio station engineer and used his VA benefits to gain his private pilot’s license.  He was still constantly trying new things.  He thought that, if you put enough sugar in a pie and added a good crust the main ingredient was irrelevant.  He tested this theory by mowing the grass and baking the clippings into a pie.  That was one of his few abject failures.

John and Marie had two children while living at Ft. Devens, Suzanne, born in 1967 and John, Jr., born in 1969.  A few weeks after John, Jr., was born John, Sr. was shipped to Shemya, Alaska.  Marie and the children settled in Powder Springs, Georgia, near her family to wait out the hardship tour.

John left the military in late 1970 as a Specialist Six and moved with his family to Greensboro, North Carolina.  He had received an offer from WBIG Radio, another employer from his teenage years,  to become their engineer and later talk show host.  While at the radio station, John performed as The Eyes in the Sky Reporter, giving traffic reports in the early morning and late afternoons.  He was well known at the local airport and eventually received an offer as an airplane salesman and charter pilot.  Always on the lookout for a new adventure, John accepted this offer and spent the next couple of years in airplane sales.  He bought a partnership in a small plane and they spent many weekends visiting family and friends.  The children grew up looking out the window of an airplane.  At first, they couldn’t understand why Daddy couldn’t land the airplane at the McDonalds that they saw below.

The toll of being gone most of the week was tough on his young family, so John applied for and accepted a position with an electronics firm selling electronic medical equipment out of Hampton, Virginia.  This was planned as the last move…a root for growing children and for Marie’s career.  They sold their share in the airplane with plans to put the money toward a boat:  a large sailboat until his bursitis kicked in, then a trawler.  The kids grew used to hopping off the boat and going inside the mall at Waterside in Norfolk where there was a variety of food for lunch.  Always new adventures with Dad at the helm.

When John’s company closed the Hampton office and offered him a position in Beaverton, Oregon, he turned it down.  He and Marie had always agreed that he could do whatever he wanted as long as the bills were paid until he hit age 35.  After that, he had to get serious.  He was 41.  Although nothing went quite as planned, {one company simply closed its doors}, he found gainful employment for several years.  They had sold the trawler for a down payment on a beach cottage at Kill Devil Hills, North Carolina.  Life was good.  They had a nice home where the children could explore in a city that offered many learning experiences.  They had planted roots and were settled.

In 2007, John began to have short term memory problems.  It wasn’t noticed at first.  After all, he had forgotten Marie and left her at the pharmacy on the weekend after they were married.  The kids learned to keep an eye on him and to always remind him of upcoming events or even to leave notes around the house.  His secretary would call Marie when he had an important client so he didn’t appear as if he had fallen through an awning.  So, the subtle change took some time to become alarming.  Finally, he retired and volunteered at the Virginia Air and Space Center as a docent.  In 2009, he was diagnosed with Alzheimer’s, which was re-diagnosed as Parkinson’s in 2011.  His health gradually began to decline and after the death of his son in April. 2017, his health deteriorated to the stage that he required assisted living by July.  He died as a result of the complications of Parkinson’s on October 26, 2017 with his wife and daughter at his side.

John was a loving man, an old fashioned Southern Gentleman.  He had many friends who enjoyed his wacky, Monty Python sense of humor and his ever thirst for knowledge.  One of his dreams was to go into space.  He was fascinated with the universe and all the mysteries yet to be solved.  Maybe this little peek would have brought him some answers and lots of joy.

His favorite quote was from Arthur C. Clarke’s, “Profiles of the Future,” published in 1962.

“…if there are any gods whose chief concern is Man, they cannot be very important gods.”