John Hanson Schuman was born in Norfolk, Virginia in 1951, the son of Charles and Mary Hanson Schuman. He then spent the majority of his life in Topeka and Lawrence, Kansas. John was the eldest of his siblings: two brothers, Jim (Shooz), and Nicholas (Nick), and two sisters, Mary Dale and Jeannette.

John's chosen profession was carpenter, which he truly enjoyed. He loved being outdoors, taking a pile of lumber and crafting it into a beautiful house. He took great pride in his work.

John described himself as a shy teenager, so to gain self-confidence, he decided to start skydiving in 1969 at the age of 18. (At the time of his death, in 1998, he had approximately 2000 skydives to his credit.) John absolutely loved skydiving. He would tell stories of being able to "fly" around clouds, using wind drafts to propel his body upwards. He also loved "sky dancing" -- a skill he was learning from his instructor, Tamara Koyn. (Tamara hosts a memorial Web page for John at www.koyn.com/JohnSchuman.) He invented a game called "sky ball" that the participants play while dropping to the earth at 140 miles per hour. (Naturally, the game had to be played in several innings....) John was fascinated with VRW ("vertical relative work," to us non-skydivers) and had designed a particularly difficult dive that hopefully someday an experienced skydiver will be able to accomplish.

He was very active in skydiving and wrote several articles and publications. He was a member of several skydiving clubs and organizations including the Greater Kansas City Skydiving Team, the Boeing Skydiving Team, the Mid-America Skydiving Team, and the Kansas State Parachute Club. He was an instructor for many years, but by 1998 he was concentrating mostly on his own diving. He had several very good friends who were also skydivers, and spent most Saturdays at the airport skydiving with his pals.

John was an avid photographer. He would have loved digital cameras! He had a Minolta camera affixed to a helmet, and would take 35mm pictures with a remote control device as he was skydiving. His friend Jamie Paul took numerous still photos of John, plus some great videotapes, including one of John riding a broom, dressed as a witch -- a perfect Halloween costume.

He married Belinda Conrad in 1996, on the 27th anniversary of his first skydive. He said he could always remember our anniversary because of that date! We had known each other for years, but there had never been a spark between us until the year we were married. We were fortunate to have 17 months of wedded bliss! We had no human children, but he did have his dog Irene, whom he loved very much.

John loved life to the fullest. He was always busy. He wrote a book, The Gray Area of Flight, and a screenplay (The Lost Ace). The book was published by himself and his sister Jeannette, and I do have a few copies left. John worked all day as a carpenter, wearing himself out, but yet he always had time to go dancing with me. We took lessons every Friday night for months. Someday we were going to be "good" -- at least, that was the hope! He also loved hiking. The weekend before he died we visited my parents in Arizona and John was able to take a two-hour hike all by himself. He had broken his leg years earlier and always thought he walked with a limp afterwards. When he returned from this hike, he declared that his limp was gone and his leg was totally healed. He was extremely happy and felt "whole" again. The timing was perfect, in retrospect.

It's been 10 years since John was killed, and it's true that the pain of missing him lessens over the years, but it's still there. Shortly after John died, I was talking/crying to a friend, who tried to cheer me up by saying that, "Oh, honey, John's flying around now being able to go anywhere he wants, and he's just having a great time." I do know he's "up there" and now part of him will be "up there" physically, too.

I was honored to be his wife. Blue skies, John. 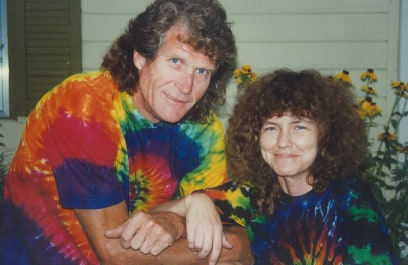