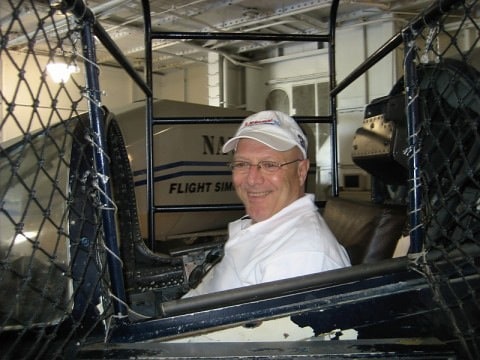 My Dad had two requests for his ashes when he passed away: some to be spread in the Gulf of Mexico and some to be launched into Space. These two requests were very well known amongst the family and our closest friends. He would state them so deliberately and matter of fact that the same questionable, yet comical reaction would always arise from those who asked! He was a very simple man who didn't require anything special or want the finer things in life, he just wanted to live his life comfortably and happy amongst his family. In a way it is somewhat ironic that these were his wishes because let's be honest, they aren't necessarily the simplest to arrange! Perhaps this is why everyone questioned it and reacted the same way?

The early years of his professional career were spent at Johns Hopkins University and the University of South Alabama. However, Dad spent the better part of his professional career with Johnson & Johnson where he managed as many as three different facilities on the East Coast over his 26-year career with J&J. He was a pioneer in his industry and co-developed a regulatory system which spawned several others that ensure compliance with FDA, USDA, AAALAC and other regulatory agencies that are widely used today in the industry.

Outside of work he had a passion for the outdoors. Growing up, some of the fondest memories he and Mom would always recount were their newlywed days spent on their boat in Mobile Bay and Dauphin Island. The boat eventually gave way to a 70's era Ford station wagon that the family affectionately named "Nelley". Drastic change to some, but fully embraced by both of them because with Nelley came two sons that would become their absolute priority. Countless days spent fishing and exploring in the woods with Dad are times we will never forget. Dad made it a priority to live his life not just for himself, but for others and most importantly our family.

Eventually my brother and I grew up, left the house and Dad's passion for the outdoors shifted. It became well known: Mom took care of the inside of the house and Dad took care of the outside which was clearly evident on any trip back home no matter the time of year. Winter meant the snow blower had a prime spot in the garage and the warmer months brought countless hours spent outside tending to the lawn and in the shed tuning up the lawn equipment.

After he passed we received many cards, letters, emails and phone calls from friends and colleagues and all of them described my Dad the same way. Loving, honest, loyal and having the utmost integrity were consistent amongst all of them. It amazes me that so many different people that knew my Dad over the years consistently described him this way. He had so many things to worry about, why did he make this a priority? Simple, because it was the right thing to do.

He was an amazing, amazing man and it feels good to write about him. I love and miss you Pops.

- Matt, written on behalf of my Mom and brother, Chris