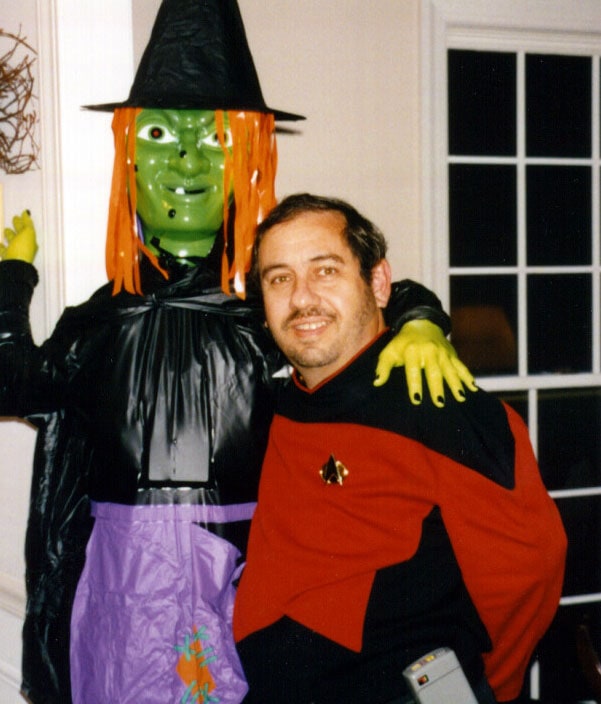 James Charles Vitti was born January 23, 1957, in Stamford, Connecticut, to Anna M. Vitti and the late N. James Vitti. From an early age Jim showed an interest in flying and outer space. Jim spent much of his free time building and launching model rockets. As an adult he earned a pilot's license and taught flight instruction. For a while he was a partner in a flight school in Miami, Florida. Jim also taught aviation courses in high school and community college.

Jim joined the Federal Aviation Administration in 1984. He served as an air traffic controller at Miami and Pompano Florida airports. He was a supervisor and facility representative at Tamiami airport. He was honored with numerous awards including a commendation and service award for his assistance to an aircraft in distress, thus preventing an accident. Jim was also recognized for his assistance in automating the Miami International Tower. Jim's efforts contributed significantly towards Miami's selection as the Air Traffic Facility of the Year. In 1994 he was commended for his participation in the recovery efforts following Hurricane Andrew.

In August 1995 he transferred to the airport in Florence, South Carolina, where he continued to be recognized for his professionalism and superior performance.

Jim was known to have a cool head and a great sense of humor which came in handy during stressful situations on the job. "Don't sweat the small stuff" and "It's all small stuff" were his favorite sayings. He loved to entertain with elaborate parties in his home. He read science fiction voraciously and played practical jokes on his friends.

On June 5, 1999, after a short illness, Jim took off for bluer skies. He left behind numerous friends and family members, including his brother Tom and his grandmother Helen, who will always remember him.

From his son Mike:
"You will live forever carrying on in the lives of many whom you have touched. Dad, you will boldly go where no man has gone before."

From his sister Madelyn:
"He followed the road less traveled and made the best of it every time. He touched the lives of many and gave many the strength to do their own thing, learn how to laugh, and not to take life too seriously."

From his mother:
"His interest in flying continued throughout his life and as you can see, it is only fitting that we are here today continuing his dream to fly a rocket into space."

From his friend Rodney, referring to Jim's union negotiating skills:
"Crush 'em like a bug."

From his friend Fred:
"Godspeed to you in your new quest."

From his friend Rob:
"Rest in peace, my good friend. Control heaven's traffic the same way that you did here."

From his neighbors Phil and Amyie:
"A dear friend, a fun friend. Jim will always be remembered."

From his friend Shane:
"I watched and learned how to get what you want without arguing. We always debated how things were in the world and how to make it better. That is by far the thing I miss the most - is just his company and talking."

From his friend Bill:
"In negotiations, I never knew him not to be anything less than totally prepared, often times better than the person unfortunate enough to find themselves on the other side of the table. I will miss Jim's infectious laugh the most because he reminded me, through practical jokes, that maybe we don't need to grow up after all - that laughter is the best medicine. You were and always will be my friend."

From his co-workers at Florence Approach (8/20/95 to 6/5/99):
"In memory of Jim Vitti - air controller, instructor, union leader, computer genius and a true friend to all. The initials "J.V. are hereby retired."

From his wife:
"You have been a wonderful friend, lover, and companion. You have been kind and patient with me throughout these good years. You have accepted and loved me and not tried to change me even when we differed in the decisions we made. I love this quality about you. Your warmth and care are memories that guide and give me courage to go on. You have been my soulmate and I miss you lots. Many a time we each were thinking the same thought and we would talk about this. Your good sense of humor, laughter and creativeness are inspiring. You have been a good friend to others and have extended yourself in helping when your help was asked for. You have been a good teacher and I have learned a lot and hope to continue to learn from our shared experiences, your comments and points of view.

These last months have been full of anxiety and fear and though you may have felt weak and depressed about our situation, your courage and will were strong. You were even worried about me, about leaving me behind. I know in my heart that you have loved me as I know you know that I have loved you. I know that as much as I miss you, you are not in pain and suffering and this comfort guides me. I hope you are in a better place and I want you to send me strength and a signal from above so I know you're there.

I will try to be happy (with time) as I know you'd want me to be.

I love you, honey. Maria