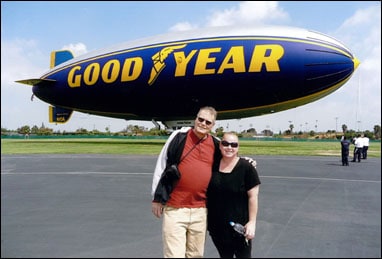 Rob was born on January 3, 1959 to teachers, Harry and Naomi Hooper. He grew up in a classic Craftsman bungalow in the Bluff Park section of Long Beach along with his older sister, Kathy. As a boy, he joined the Boy Scouts, and throughout his life he exemplified the very best of its core values of character. Also as a child, Rob was fascinated with America's developing NASA program, and became an ardent devotee of Star Trek. In high school, Rob's enjoyment of music led him to play the baritone saxophone for both the Wilson High School Marching Band and Jazz Band.

As everyone who ever knew him knows, Rob loved "things that go." He became a Certified Master Mechanic, working first for Chevron, and then for the Bureau of Automotive Repair (BAR) where he fought for consumers, exposing frauds and scams at car repair shops and stores. He would do "stake outs" at smog certification and repair stations that were suspected of falsely certifying polluting cars. He would also take a fully functioning car with one small known thing wrong to a repair shop in order to see if the shop tried to sell unneeded repairs. As a result of his investigations and court testimonies, dishonest firms were charged, and consumer rights were protected.

In 2008, Rob married his long-time best friend, Kimy. She relates that during the course of their relationship, the extraordinary, unconditional love she experienced from Rob transformed her life in a way she'd never before experienced. Throughout their relationship, Kimy and Rob traveled around the United States and the world. Highlights of their many trips were swimming with dolphins and sea lions in Mexico, manta rays in Hawaii, and manatees in Florida; and enjoying exotic foods. Their lives were full and rich. They lived as though tomorrow was never a promise.

Rob loved all animals, especially cats, although he would joke that at heart, he himself was really a big, old St. Bernard. Other things Rob enjoyed were roller coasters, and "eating his way through" the L.A. County Fair each year. Fried Twinkies, fried SPAM, fried Snickers bars, giant donuts, and turkey legs were a few of his favorites. Rob also had a special affinity for Las Vegas, not because of the gambling, but because of its oddities, attractions, and just plain neon glitz.

Like his parents, Rob had broad interests in nature, history, politics, science, music, different cultures, and much more. He enjoyed going to museums and taking tours with the Los Angeles Conservancy to little known "L.A. gems." Rob was a voracious reader and had a remarkable ability to recall facts and all kinds of trivia. Throughout his life, Rob was bright, inquisitive, fun-loving, kind-hearted, and loyal to family and friends.

In September 2008, Rob was diagnosed with pancreatic cancer. He fought it bravely, with Kimy by his side. During the past difficult months, he was cheered by three extra-special events. He and Kimy were thrilled when they were "cleared for take off" on the Goodyear Blimp.

Recently, they also took a helicopter trip into the Grand Canyon. Rob's "inner child" was also very excited when they were able to take a private tour of NASA's cutting edge Jet Propulsion Laboratory in Pasadena, a tour which is not available to the general public. The highlight of the trip for Rob was seeing the Mars Space Rovers. He would be thrilled to be a part of this historic spaceflight.

When Rob was first diagnosed with cancer, he was saddened to learn that he could no longer be an organ donor. To our surprise, we were contacted shortly after his death and learned that his corneas could be harvested. We are hopeful that part of Rob will soon enable someone else to see.

Rob was a gentle and loving man who will be greatly missed by his family and friends. A special thanks to his extended family who helped make his last wishes come true.

Do not stand at my grave and weep.
I am not there, I do not sleep.
I am a thousand winds that blow;
I am the diamond glints on snow.
I am the sunlight on ripened grain;
I am the gentle autumn rain.
When you awaken in the morning hush,
I am the swift uplifting rush
Of quiet birds in circled flight,
And the softest star that shines at night.
Do not stand at my grave and cry;
I am not there, I did not die.