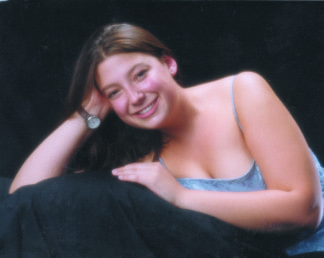 Genevieve was born August 2, 1981, in Colorado Springs, Colorado. She lived at the foot of Pikes Peak, which she loved, for all but a few months of her early life and the time she spent at college.

Genevieve was extremely focused on becoming an astronaut and a doctor. It had been a dream of hers since she had first seen the Milky Way on a camping trip in South Dakota. She thought it was smoke in the sky. Her mother explained that it was the edge of the galaxy. She stared at it in wonderment. The doctor part of her dream began with the birth of her brother, Dustin, who was born without one of his legs and a severe club foot. Gen was fascinated with Dustin's treatments while she was extremely concerned for his well-being when experiments didn't work and Dustin couldn't walk. Her frustration at his discomfort served to cement her ambitions and focus her efforts.

Ten years after the South Dakota trip she told her high school newspaper that she saw herself "studying bone structures in space" in 10 years (from 1999) while her friends would "be living in my house." One of her friends was more realistic, saying she saw her friends having fun "except for Gert (Gen's nickname) who will still be in med school."

While Gen was busy working hard to make her dreams come true, she didn't miss a moment of her short life. She and her mother traveled to Europe. She traveled with her family to the East and West Coasts, Mexico and even Disneyland. She was a published poet and archived photographer. She helped create two permanent art murals in Manitou Springs, a neighboring community of Colorado Springs. She participated in school plays, choir, mock trial, and failing to get selected for a sports team, she became a mid-season replacement cheerleader. She made Who's Who Among American High School Students all four years in high school and was listed posthumously in The National Dean's List - the who's who of college students.

Her most important accomplishments came in how she affected the people around her. She was an amazing friend, inspiring an incredible amount of love and admiration. After she was killed in a car accident, word spread through her home community: letters and people poured in from all over the country to tell her family how she had changed their lives. One way she changed people's lives was by making friends with every new student at Manitou High. Several students commented on her kindheartedness and generosity: "She was the first to take me in under her wings." "She was the only person to talk to me my first day." "She was my first friend in Colorado. She helped me get through a lot of hard times and encouraged me when I really needed it. Gen's kindness amazed me."

Genevieve loved and was loved more than she knew by her brothers, Paul, Dustin and Ethan, and by her parents, Mark and Karen. She is, and will be missed deeply.

Ever since she looked up
and saw the edge of the galaxy
she's had her hands
reaching for the "smoke"
and I've had my hand poised
to let go of her heel.