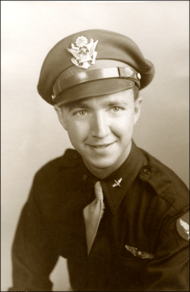 Mr. Mitchell was a veteran of World War II, during which he served as a B-26 pilot in the European Theater of Operations earning the six cluster air medal for completion of 40 combat missions. Following his military service, he was employed by the Boeing Airplane Co. of Wichita.

"Fred" was a man who felt he could do anything to which he put his mind, always with an eye toward the sky. Fred was as honest as the day is long and his integrity was something we looked up to and aspired to obtain. He was truly a member of the “greatest generation” that saved the world from those that would enslave us all.

Oh! I have slipped the surly bonds of earth
And danced the skies on laughter-silvered wings;
Sunward I've climbed, and joined the tumbling mirth
Of sun-split clouds - and done a hundred things
You have not dreamed of - wheeled and soared and swung
High in the sunlit silence. Hov'ring there
I've chased the shouting wind along, and flung
My eager craft through footless halls of air.
Up, up the long delirious, burning blue,
I've topped the windswept heights with easy grace
Where never lark, or even eagle flew -
And, while with silent lifting mind I've trod
The high untresspassed sanctity of space,
Put out my hand and touched the face of God.

May Fred be Requiescant in pace.