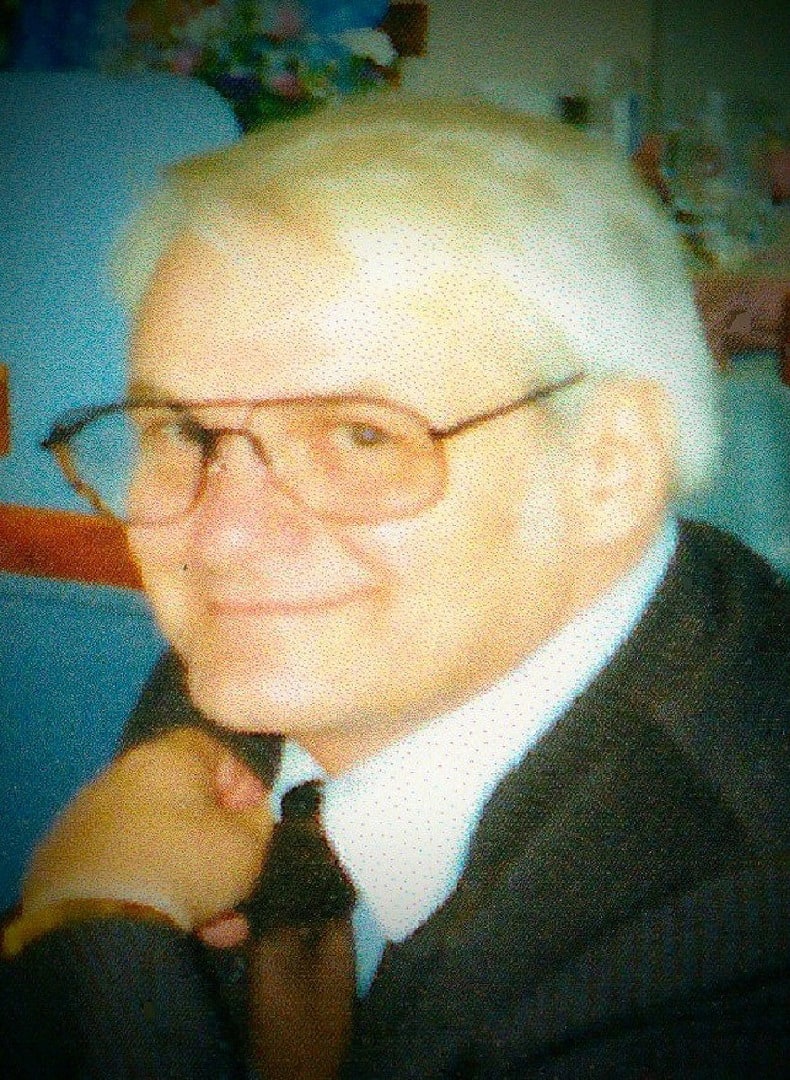 Fran was born and raised in Framingham, Massachusetts. After overcoming many tragedies and difficulties in life, he went on to become a pioneering computer programmer and a beloved husband, father, and grandfather. We remember him for his impossibly even temper, endless curiosity, and resilient spirit.

He experienced the death of his mother at eleven years old and his father's death only three years later. With his only sibling, Donald, enlisted in the Air Force, Fran found himself alone at the tender age of 14. After a brief stay with a loving and well-meaning aunt, he was welcomed into the family of his maternal uncle, Harry, where he was re-enrolled into high school. He stayed with them until graduation and marriage to his high school sweetheart, Anita Nicolai.

Fran was a consummate mathematician. His love of math steered him to the budding field of computer science. In March of 1968, he was sent to Thailand to install and program the first permanent Communication Earth Station satellite dish in the rural mountains of Sriracha. In the following years, he did the same in Japan, Chile, and Holland. He was also responsible for programming some of the first onboard, in-flight computers for Boeing, Inc. in the United States. He managed his diagnoses of Type I diabetes and narcolepsy (at that time, a little-known condition) with characteristic good humor, patience, and perseverance.

Fran was innately curious and passionate about many different interests and hobbies. He enjoyed building models, woodworking, and coin collecting as well as playing cards "with the guys" and all things sports. He enjoyed reading and collecting first edition books from his favorite authors: Carl Sagan, Isaac Assimov, and Erik VonDaniken. He was an avid follower of the latest news from NASA, SpaceX, and Virgin Galactic. For his ashes to be brought to space is truly a fitting memorial.

Fran’s love of computers followed him into retirement. As his health conditions worsened and prohibited him from engaging in many hobbies, he stoically discontinued them. However, he refused to give up tinkering with computers. Scenes of him asleep at the computer with a magnifying glass - determined to digitize his wife's embroidery designs or program his own Sudoku puzzle - were numerous. When asked why he didn't just download something pre-made, he would answer, "There’s no fun in that!”

His daughter Lisa writes, "Most fathers are heroes in their children’s eyes. As it was with mine. To me he was Superman: strong, handsome, and invincible. As I grew into adulthood, he never stopped being my hero. Only then, I was mature and wise enough to know that it was not Superman’s attributes that made him a hero, it was Clark Kent’s. My father was mild-mannered and patient, loving, thoughtful and kind. He faced his many challenges, adversities and setbacks with integrity, good humor and most importantly, perseverance. That is what makes a true hero."

His daughter Marie writes, “My dad was a significant influence in my life. His quiet, laid-back nature is a virtue everyone speaks of when remembering him and something I try very hard to emulate in my own life. His love for science fiction lives on in me (although his passion for math completely missed me!). My dad's humor was a big hit with family and friends. Yes, he was quiet, but he could be hilarious. He was always ready with a smile and laughter. He taught me to love and respect myself as well as others. I believe the love and joy I find in my life are due to his teachings. A small spaceship containing his ashes will always hang from my neck.”

"Some of the fondest memories I have of growing up was when we would watch Bobby Orr and the Boston Bruins play hockey. Being from Massachusetts, and to be able to say I got to watch the greatest hockey player of all time with you is something special. I was too young to watch the whole game so you would always write the final score on those old school computer punch cards then leave it on my nightstand so it was the first thing I could look at in the morning - win or lose. I will always remember that!

"Another favorite memory is us walking over to Schofield school to practice baseball. You ran all over the field picking up my errant throws and the occasional batted ball. It always ended with us walking home early because you were tired - ha, ha.

"And who could forget Macosa, the dog we got when we were little? I don’t believe it had a name when we went to bed (probably because us kids couldn’t agree on one) by the next morning it was named 'Macosa' - after all three of us MArie sCOtt liSA.

His cousin Nina writes, "My memories of Fran are warm and lovely and from an early age. I was fortunate to be born into a household that my parents shared with my mother's mother, father's father and a year or two later, Francis. I can only imagine what the loss of both parents within 3 years, as a teenager, meant for him. He was a sweet soul. Even given all that he had been through and with his older brother Donald having left for the Air Force, Fran was easygoing, kind and a very easy teenager for my parents to raise. They loved having him with us. One Christmas, he gave me a stuffed teddy bear that I loved. He met Anita and they married right out of high school. He was happy and excited. My parents took their roles as parents of the groom and I served as flower girl, probably the highlight of my 5-year-old life! He has always had a very special place in my heart and I still treasure a 'princess' ring he brought back for me when he was in Thailand a few years later. I have always suspected that he was a person who was able to take a situation that could have really set him on a difficult path and conquer it by creating and committing to a family of his own. I also think part of his resilience came from having those first 11-14 years with his parents, who by all accounts, were warm and dedicated parents. Those things matter."

His grandson Max writes, “My grandfather was a sweet and caring man. One who always shared an enthusiastic interest in whatever hobby I was into at the time. He was there to confide in and provide thought provoking insight, without judgment, to whatever topics or problems I brought to him."