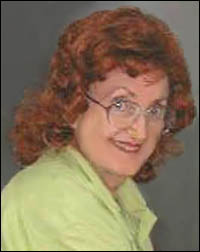 Faith had many interests. At 19, she was stationed at Hickham Field in Honolulu during WWII working as a “Rosie the Riveter” aircraft mechanic and a ballroom dance instructor. She attended George Washington University, Muskingdom College, University of Hawaii, Ohio State University, Orlando Junior College (AA), Tulane University, and finally Arizona State University (BS, MS), where she was the first woman to graduate in Electrical Engineering. She was president of the astronomy club in Orlando, a HAM radio operator, an avid traveler visiting almost every country in the world, and a student of languages. She taught in public schools in Florida, Nevada, and Arizona. Faith spent many years working as an engineer for Motorola in Phoenix and East Kilbride, Scotland, researching radiation hardening of integrated circuits, and participating in the design of the first Macintosh computer. She was one of Motorola’s first female engineers. She also worked at RCA in New Jersey, and Societa Generale Semiconduttori in Italy.

Faith was predeceased by her parents, and husband, Raymond Lee, an acoustical contractor in Phoenix, Arizona. She is survived by two sisters, Marie Hubert of Cheyenne, Wyoming, (both pilots, Faith and Marie flew across the country in a Piper Cub in 1945, landing on highways and refueling at gas stations due to the paucity of private airports at that time) and Rosemary DePue of Silver Springs, Maryland; her daughters, Sherry Gamble of Phoenix, Arizona, and Cindy Lee of Setauket, New York; her son, Raymond Lee of Cody, Wyoming; as well as two grandchildren and four great-grandchildren.

Faith raised her children on Aerobee Hi rockets, and the rocket launches of the 50s. Befitting her outsize personality and impact on many people, her final achievement will be to fulfill a life-long dream to go into space.