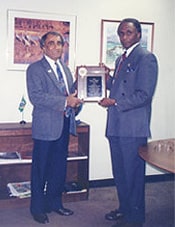 Dr. Rashmi Mayur, International Director of The Institute for Cooperation in Space, passed away February 4, 2004 in Bombay, India. He will be honored on The New Frontier Flight.

Dr. Mayur had a long and distinguished career as an educator, futurist, environmentalist, and expert in international development. He was Director, International Institute for Sustainable Future, a non-profit research and educational organization, and President, Global Futures Network, a United Nations affiliated NGO since 1976. He served as Special Advisor to the Secretary General of the Earth Summit, Rio de Janeiro, Brazil 1992 and the Habitat Summit, Istanbul, 1996. He was the Vice Chairman of the NGO Unispace Conference of the UN in 1982 and a member of the team to build a Space City under Dr. Gerard O'Neill, who was on board Celestis' Founders Flight in 1997. He was a board member of Sunsat Energy Council, USA, and Vice President of the Space for Humanity program of the United Societies in Space, Denver, Colorado, USA. He was the South Programs Coordinator for the World Future Society, and the Vice President of the Association of World Citizens, San Francisco, California.

His arena of work in international development was Asia, Africa and Latin America. He traveled to 84 countries as an advisor to the UN and several governments in the developing world on issues of environment, urban planning, global ecology and technological application to sustainable development. His innate forte was to apply innovative techniques of education to foster socio-economic development.

Dr. Mayur was a prolific writer and a featured speaker at innumerable international conferences. He was the inaugural speaker at the Earth Summit N.G.O. Forum. He lectured and taught at several universities around the world including Harvard, MIT, New Jersey City University, Tokyo Institute of Technology, University of Michigan, Bombay University among others.

He wrote nearly 800 articles and eight books, the latest being Pedagogy of the Earth. He received several major awards -- the UN Award for Science, Technology and Future, 1992; the Space and Humanity Award, United Societies in Space, 2001; the Sustainable Development Award, Japanese Planetary Academy, 1999; the Outstanding Young Person Award, International Jaycees, 1978; the Priyadarshini Sustainable Development Award; and many others.

Dr. Noel Brown of the United Nations Environment Programme (UNEP) describes Dr. Mayur as "a man of mission for whom life is [a] mission to build a good earth for everyone."

Dr. Mayur was an advisor to several UN bodies including UNEP and the United Nations Population Fund. His other advisory appointments included: Special Advisor to the United Nations on Information Technologies for developments in the developing countries, since November 2000; Advisor, United Nations Sustainable Development Program, since 1988; Chairman, Think Tank, Telecom Department, Government of India, since 1994; Member of the State Committee for Primary Education in Maharashtra, since September 1999; Advisor, Government of Ghana for development of IT villages, since November 2000; Member of the Committee on 'Bridging the Digital Divide,' MIT, since October 2000; Advisor, Science, Technology, Environment and Development to 15 countries of the world, including Brazil, Kenya, Ghana, Suriname, Guyana, Japan, the Philippines and India, etc.; Member of the Advisory Board and Diplomat consultant in areas of education and environmental studies worldwide for the Academy for Future Science, California; International Director, India, for the Institute for Cooperation in Space; Vice President, Earth Day International, Long Beach California, 1990; World Summit of Sustainable Development Director, 2002.