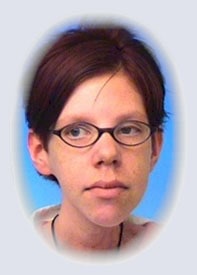 Life is living, fight for it. That is what our power-girl did.

Daphne de Jager was born January 22, 1985 in Deurne, the Netherlands. She grew up in Helmond. She was a quiet girl but also a girl with power. In spite of her illness and her struggle with health she took life with both hands, lived out her fantasies and always aimed at the future. School was very important for Daphne. She just started a new education to become an architect.

Her hobbies were painting, drawing and writing poems. Her paintings radiate power, colour and movement. Her poems were realistic and sensible/sober.

She enjoyed simple things of life, such as talking with friends and listening to good music -- or just watching television with a bag of chips.

In August 2003, nine months before her death, Daphne cycled a sponsor expedition called "a chain of balloons." This was a fundraising tour of 500 km. through Holland with the purpose to raise money for the Dutch organisation for parents, children and cancer (VOKK) and for a hospital in Eastern Europe. The tour was cycled by (ex) cancer patients and their brothers/sisters and they pasted university/teaching hospitals. In this way they made a chain. During this tour Daphne inspired others by her power and positive life mentality.

Space is what Daphne needed during her lifetime: space for her feelings, her emotions, her drawing and painting, as well as her music.

Fill space with your spirit.