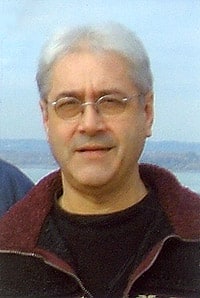 Charles W. Elroy, Jr. was born in Seaside, Oregon in 1955 to Charles W. Elroy, Sr. and Virginia (Wood) Elroy. He was raised in Cannon Beach where he enjoyed riding his bicycle, going for ice cream with his big sister, watching out for his little sister, playing ball with his dad, walking the beach with his mom looking for glass floats, playing the drums, and hanging out with his friends.

In 1971 he moved to Lincoln City when his father was transferred to build the Siletz Bay Bridge. He graduated from Taft High School in 1973 where he was voted "most humorous" in his class and he lived up to that title throughout his life.

On August 16, 1974 he married his high school sweetheart Diana Kosack. They attended college together at Clatsop Community College in Astoria for two years before moving to Depoe Bay in 1976.

Chuck was a creative genius, the copyright and patent expert, the inventor, the holder of many patents, the invention seminar for kids guy, the writer of commercials, the landscaper who spent endless hours making yards look so perfect, the proud father of two brilliant, exceptional children, the joke teller, the belly laugher, the creative joke man who sent material to Johnny Carson and got a response of laughter, the poetry writer who received a hand written "Thank You" from Yoko Ono and Sean Lennon when he sent them a poem that he wrote after John Lennon was killed.

Chuck worked in retail sales, advertising, construction, and spoke to students about inventing. His spare time was spent with his family. He enjoyed attending sporting events and other school activities, and spending time at his property in the valley, camping, and walking his much loved dog Whitney.

Chuck had a big interest in space. He had a large telescope and enjoyed looking at and studying the stars. He found a rock that is believed to be a meteorite and he spent endless hours studying it and the geophysical sciences. Even before he found out that he had terminal cancer he found out about Celestis and printed that information off the Internet and said that it was his wish to have his ashes taken into space and someday be released as a shooting star. His wish is being carried out and we could not think of anything more fitting for him.

We would like to thank you for providing this service that helps make dreams come true.