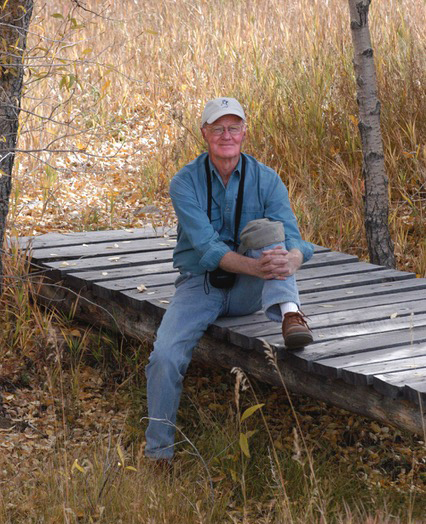 On September 18, 1932, Charles Richard Boulle`, the 6th child of Marguerite and Robert Boulle’, was born at home in Caledonia, New York. During “Dick’s” early school years they lived in Geneseo, New York and then on the shore of Conesus Lake. When he was 14, the family moved to Rochester, New York where he attended West High School.

While in high school Dick excelled at the field and track sports of high hurdles and pole vaulting. Not feeling inspired by high school, he joined the U.S. Naval Reserve when he was 17. Dick served 2 years of active duty on The USS Coral Sea and attained the rank of EMP3. Upon discharge on Jan 22, 1954, he returned to Rochester and was employed by the Rochester Telephone Company. His work there included mainframe maintenance as well as outside repair and installation.

On May 30, 1956, he married Kathleen Rinehart. In June of 1959 they and their first daughter moved to Angola, Indiana where Dick earned his Bachelor of Science degree in Electrical Engineering in December of 1961. His career and love for new and challenging projects took him and his young family to Florida, California, Georgia, New Mexico, and Oklahoma. Later in life he was employed on engineering projects in Pennsylvania, Arizona, back to Florida, and then Alabama. Inertial navigation systems were his area of expertise in the aerospace industry. The Minute Man Missile, SR-71 Blackbird, C5A Galaxy, Osprey and a Space/Earth Reentry Vehicle were some of the projects he worked on. Dick also founded his own company, Vector Instruments, developed products and did consulting.

While maintaining a heavy work schedule, Dick always found time to spend with his wife and four daughters. He taught the girls how to swim, sail, fish, and ski as well as the practical skills of driving and repairing cars. He took his family on some marvelous adventures. In 1971 he planned a 2.5 month camping trip through some of the National Parks of the northwestern U.S. in a 24’ trailer. The family left Altus, Oklahoma on June 1st and visited such places as Mount Rushmore, the Tetons and Yellowstone, Glacier National Park, the Olympic Peninsula, the coast of Oregon and the Willamette Valley, upper Idaho, and then across country to Dunedin, Florida by mid August.

Dick was also a man who involved himself in the betterment of his community, with a particular focus on youth or people needing support. Some of those projects include helping to design and build an outdoor ice skating rink and shelter in Cloudcroft, New Mexico. He volunteered as a Optimist Pram Master in Dunedin, Florida where he taught children aged 9-14 how to sail. Dick also participated on a committee supporting the Pinellas County School Board to determine why students were dropping out of high school and worked to find solutions to keep kids in school. In further support of Dunedin High School, he engineered and helped build a solar heating system for the pool used by the swim team and then worked with the town of Dunedin to build a new Olympic sized community pool. He also took an active role in a prison ministry that gave help and support to inmates at a Canon City, Colorado prison.

As he approached retirement he and Kathy designed and built every aspect of their home in the Wet Mountain Valley of Colorado. This south west style house was ahead of its time with a low carbon footprint and utilization of passive solar heat.

Both creative and talented, Dick taught himself to play the flute. He also taught himself how to bevel and artfully cut glass and built the machines needed to accomplish those visions. He was forever curious and wanting to know how things work which led him to explore things far afield from engineering.

A retrospect of Dick’s life would not be complete without noting his love of the outdoors; his passions for horsemanship, sailing, golf, and skiing. All these things are carried on through his daughters and grandchildren.

He was a remarkable man. We love him dearly.