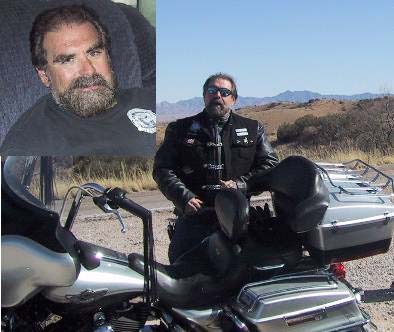 Charles "Wizard" M. Zap was a man of many facets. His hopes, dreams and inspirations are outnumbered only by the stars in the sky. His family and friends extend further than even this universe which he so deeply loved.

He was born in Montreal, Canada on September 27, 1955. Later in life his compassion for space grew when he worked for NASA in Houston, Texas for ten years. He graduated from the University of Arizona with a bachelors of Science in Computer Engineering but never lost his compassion for space. He built his own home in Sierra Vista among great views of the open sky.

As a child, Charlie's intelligence led to a thirst for more. He was limitless in his talents and desires to fly freely through this world. From a young age he put his talent to use and built an entire city of model trains.

As he got older, he proved to have a passion for motorcycles and became certified to build them. The imaginative but free world of trains was finally matched by a more real freeing activity, riding a Harley.

His wonderful mother inspired his strong Jewish faith. So strong was his faith in Judaism that he practiced every holiday. He had his friends light Hanukkah candles at his home when he could not be there. Every year he would buy a live tree and plant it in his yard. Charlie's father was also a very intelligent man, whom Charlie took after in many ways. The love for people, plants and all living things is just one aspect of the sort of great wisdom this man entailed. He wanted to see the good in people and gave everyone the benefit of the doubt.

Charlie had a love for women, and although he only married one in his life, he extended his heart to many along the way. He only had one natural daughter but was a father to many. The birth of his grandchildren helped bring Charlie's hopes and dreams to full fruition. He collected dragons, Harley's, trains, cars and boats as an extension of love through the things he loved most.

Charlie was a shooting star. As a former NASA employee, Charlie dreamed about space. His remains will now become "one" with the stars. He often talked about space and found delight in science fiction books, movies and shows. Star Trek was just one outlet that Charlie used to help feel closer to the stars while here on earth.

It is appropriate, yet sad that the day Charlie left us, he was accompanied by all the things he truly loved. The meteor shower came that night while Charlie, his loved one and friends all enjoyed their final moment together on a midnight ride from Tombstone. Charlie, Dad, Pokey, Grandpa, you are forever our guiding star! We love you and will always remember you! RIDE CHARLIE RIDE!

I am the soft stars that shine at night
Do not stand at my grave and cry
I am not there I'm in the sky!