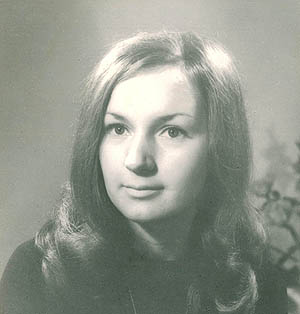 As a young woman Anne's adventurous spirit took her to the islands and highlands of Scotland where she had a wonderful time working in the hospitality industry. Her loving and caring nature eventually saw her join the nursing profession at the Belvidere Hospital in Glasgow.

I met Anne in September 1966 during a short holiday in St Andrews on the northeast coast of Scotland, near where I was serving at Royal Air Force Station Leuchars. We had a long distance courtship writing to each other every day and meeting most weekends. We were married in November 1967 and became Goose and Gander forever. We were posted to RAF Changi in Singapore early in 1968 and our son Andrew was born there in December. One of her many nicknames, ¥Missy', came about during this time. Anne enjoyed playing Netball during our stay in Singapore.

After 2 - years we returned to live at RAF Prestwick in Ayrshire Scotland. While travelling on a family holiday in the early hours of the morning across the moors in South Ayrshire, Anne had her first encounter with a UFO and her interest in space, the stars and astrology was born.

Anne worked for both Tupperware and Oriflame (Swedish cosmetics) as a manager in Scotland and was very successful.

I left the RAF in 1973 and, eventually in 1977, we immigrated to Australia with Rank Xerox to where Anne's Mum and Dad and three sisters lived in Melbourne Australia.

Badminton became her sporting passion and she carried this on until late 2003 when melanoma prevented her from continuing. She also took up golf in 1991 during our stay in West Australia.

Anne studied astrology and, amongst her friends, became a well-known ¥palm reader'. She knew all the stars, a knowledge she shared with our son Andrew and then many years later with our grandson Andrew John. Anne could often be found at night on the balcony of our home in the hills just outside Adelaide in South Australia, looking through her astral telescope seeking what was ¥out there'. She became affectionately known as my 'White Witch'.

One of her wishes was to travel the Outback of Australia where she hoped to experience some of the many UFO sightings that she had read about in the media over the years. This wish eventually came true during the last months of her life in November 2003 when we visited Alice Springs and Uluru (Ayers Rock). Unfortunately we encountered no UFO's. However, she was able to climb a little way up the rock - which was an unforgettable experience for her.

Anne was loved by all who knew her, and her cheerful smile and love of all things ¥smiley' will remain with us forever. She closed all her correspondence with ¥Sunshine and Smiles'.

This final journey of her ashes into the heavens will take her memory closer to the angels she often talked about during the brief 58 years she spent with us.

From your Gander, Andy

A child in pain, just hear it cry
And to soothe it she will always try
With tender words and loving care
She brings it ease, an answered prayer

Sometimes you may hear her say
I love my job but not the pay
I agree, as she must live
The government must, much more give

Perhaps you’ve guessed what my beloved is
An Angel, a Saint, she’s all of this
It’s something that can’t be explained in verse
Yes, my beloved she is a nurse

Dearest I pray, you like this verse
Because you are my only nurse
And any time that you feel blue
Please think of this RAF lad so true

I hope that you can find the time
To compose for me, a lovely rhyme
Your letters make me Oh! So glad
With you, life would ne’r be sad