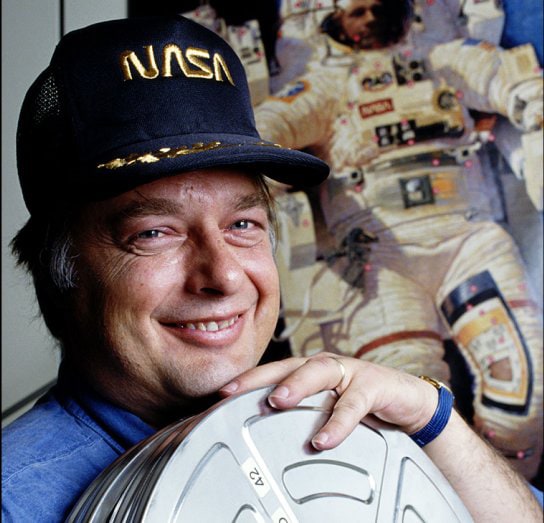 After high school in Fort Worth, Reinert attended West Point for a year before deciding that he’d rather try to play pro baseball than be a commissioned army officer. He won a scholarship to Texas A&M, where he studied geology, a far cry from his future as a chronicler of Houston’s space age. His goal at the time was to be the next Bobby Richardson, the All-Star New York Yankees second baseman. Over time, that idea began to curdle in his young mind and one morning he asked himself, “If you are going to be something in life, why be a second baseman?” After Reinert tossed his glove aside and turned his attention to student government, he was promptly elected president of the student body of Texas A&M, defeating future Texas Land Commissioner Garry Mauro (although Reinert never took office, since his 1.23 GPA wasn’t up to the 1.5 standard).

After graduation, Reinert moved to the Bayou City. The once clean-shaven cadet now sported shaggy hair and a mustache. After being found in possession of marijuana, his probation required a steady job, so he convinced Houston Chronicle city editor Zarko Franks to give him a shot as the evening crime reporter. It was the lowest position there was at the paper, but a terrific make-it-or-break-it proving ground for an aspiring journalist.

“That was journalism school for me,” he told his former Texas Monthly colleague Thorne Dreyer in a 2014 KOOP radio interview. “You’ve got to figure out what the facts are – the who, what, where, how, and when – while on crime scenes where everyone’s going nuts.”

Reinert proved himself worthy and was soon promoted to covering politics, but his own leftist streak put him at odds with Chronicle top brass. “I had all the wrong politics and I got fired from the Chronicle within a year,” he told Dreyer. But within a month of that dismissal, fate came calling in the form of a new publication: Texas Monthly, whose founding editor Bill Broyles had been won over by Reinert’s bulldog tendencies, even as a young reporter.

“I met him when he was at the Chronicle and I was the community relations guy at the Houston School District. He totally slammed me on some election I was running, so when I started Texas Monthly, he was one of the first guys I called,” Broyles remembered. “He was like 24 and I was 27 — kids, really, but he had such a talent. He was in the second issue, I believe, and wrote many of the great early stories and some great later ones too.”

His very first story for the magazine, “So Long, Cosmic Cowboys,” an elegiac look at the waning days of NASA’s Apollo program in 1973, set the tone for much of the rest of his life. But he didn’t only write about our celestial ambitions: he authored “Closing Down LaGrange,” a remembrance of what did and did not happen at the infamous Chicken Ranch in Fayette County; he expounded on what it meant to be an Aggie; he wrote “Billy Lee,” an eloquent and melancholy remembrance of brilliant, speed-addled Billy Lee Brammer, author of The Gay Place.

Broyles, his editor, saw a through-line going back from Reinert through Brammer and back to F. Scott Fitzgerald. “Pure artists, romantics with a conscience, at a tangent to the rest of us, burning bright and intense,” he said.

Often, these stories weren’t easy to wrest from Reinert. “There was not a single deadline he would not duck or push,” said Betsy Broyles Breier, Bill Broyles’s sister, who met Reinert during Texas Monthly‘s early days. She recalled once stalking him around Manhattan, where he’d fled from a deadline, tracking him down through informants reached on pay phones, to see that he did produce the story he’d promised and the magazine could go to print.

The deadline buster also had cast his eyes toward the heavens. He dabbled in film since early in his career, and Reinert had been fascinated with NASA since his early days as a Houston reporter. By then, three or four years after the Moon landing, the agency was yesterday’s news. “By 1973, nobody was beating on [astronaut Jim Lovell’s] door to do interviews,” Reinert said in 2014, recalling how lack of security checkpoints meant he could drive right in to Houston’s Johnson Space Center and that Lovell was running a tugboat company on the Houston Ship Channel.

Through hundreds of hours spent interviewing astronauts and even more time watching NASA films — 2,000 hours all told, by one estimate — Reinert became a documentarian. “I’d always been interested in film and I was an on-the-job kind of guy,” he said. “I didn’t know anything about newspapers or magazines when I started at either of them. Those both worked out okay. So I figured how complicated could the film business be?”

For All Mankind, a narrator-free documentary of the Apollo program, uses only NASA footage and the voices of astronauts and their land-based advisers, set to an ambient Brian Eno soundtrack, to encapsulate the sense of wonder when man left Earth and returned again. “We’d never seen [space] on a big screen,” Reinert said. “We were out there in the biggest location in cinema history and we’d only ever seen it on little tiny screens.”

The film took eight years to complete. “We used to joke that we spent the entire 1980s — the decade of greed — on a passion project that made us no money,” said Breier, who served as a producer on the film, though she specified she was mostly the “Al wrangler.” The near-decade of production was worth it — For All Mankind was Oscar-nominated and a winner at the Sundance Film Festival for best documentary.

“Apollo had always been portrayed as going to the Moon. It never occurred to me that that’s really secondary,” Reinert told the L.A. Times in 1990. “The Moon’s just the first place you can stop. But what was really meaningful to these guys, if you talk to them, what sticks in their minds was leaving the Earth ... because for days they watched the Earth shrink! What I heard from all these men was the story of a spiritual journey, much more than a technical achievement.”

Broyles, who cowrote the screenplay of Apollo 13 with Reinert, says For All Mankind got to the very heart of the greatest adventure in the history of mankind. “He never lost his sense of wonder,” Broyles said. “And he got to the heart of the men who left their home planet.” Their screenplay, which gave the American lexicon not one but two catchphrases — “Failure is not an option” and “Houston, we have a problem” — was nominated for an Oscar.

Houston restaurateur and bon vivant Bill Sadler loaned Broyles and Reinert a Houston apartment so that the two then–Los Angeles residents could see Apollo 13 through to completion — and because they all enjoyed each other’s company and liked to party. “Well, there was supposed to be some rent involved, but, you know.... He did give me his Academy Award ballot one year and I voted it,” remembered Sadler. “Al lived hard and worked the same.  He had the warmest spark of humanity in him of anyone I’ve ever known and not a whit of mean. Brilliant and always curious. I shall miss him so.”

Time and again, Reinert’s old friends praised his single-minded curiosity — and insisted that the best stories about him are not fit for family publications. Andrew Dansby, culture critic for the Houston Chronicle, called Reinert a man of “vulgar eloquence” with a “big calloused heart.”

“This sounds pejorative but he was like Yoda,” Dansby wrote in an e-mail. “Creaking and croaking about this and that like a guy older than he was, but then he’d focus on a subject and start spewing things that resembled poetry.... He seemed so much more interested in the person he was talking to than himself.”

“He was an Aggie and an artist,” Broyles added. “I can’t tell you how much I will miss him.”

Reinert leaves behind a legion of grieving friends and fans and his wife, the actress, writer, and artist Lisa Hart Carroll, the love of his life.