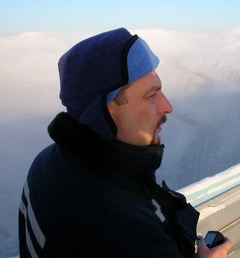 Tyson was born with a love of technology, an understanding of how machines worked, and an innate knowledge of how to fix them when they stopped working. He built his first oscilloscope as a child and got his Amateur Radio Licence as a teenager. His love of technology led him to the Southern Alberta Institute of Technology, where he excelled in the Industrial Electronics Program.

His skills would lead him to a career of traveling the world, installing and troubleshooting communication equipment for mining and oil and gas. During one job, Tyson stayed in the same hotel Yuri Gagarin stayed in after his 1961 Vostok flight. He worked on every continent except Antarctica, in every condition, and made friends around the globe.

There wasn’t much Tyson couldn’t fix, and he was legendary for his ability to jury rig things enough to keep them operating when things went south in the field.  When his 1981 Buick LeSabre overheated on the side of the Coquihalla Highway in British Columbia, he fixed the clutch fan with rope and rubber cement and drove the car for six more months before buying parts for an official repair.

Tyson joined the Scouts Canada program as a leader in 2008 and, for the next decade, shared his love of technology and willingness to help out with countless youth. When the kids wanted to earn badges related to technology, Tyson was in his element, showing them how to use radio communication gear or teaching them about the space program.

Tyson’s love of the space program developed early, and some of the highlights of his life would be watching the Atlantis Shuttle launch from Cape Canaveral and touring Johnson Space Centre. He was fortunate enough to marry a fellow nerd who shared his love for all things space, and we spent many a night tracking satellites overhead, watching launches on NASA TV, and arguing over which Star Trek series was the best.

Tyson’s family meant everything to him, and he is survived by his wife, Sue, his children Orren, Lucie, and Quinn (who all inherited his technical DNA), his siblings Gerarda, Marina, Rudy, Hjalmar, and Liska, and their families, and by his brother-in-law Clint. Tyson didn’t have time for all the adventures he planned, but it will be comforting to look up to the stars and know he has had a moment in the heavens.