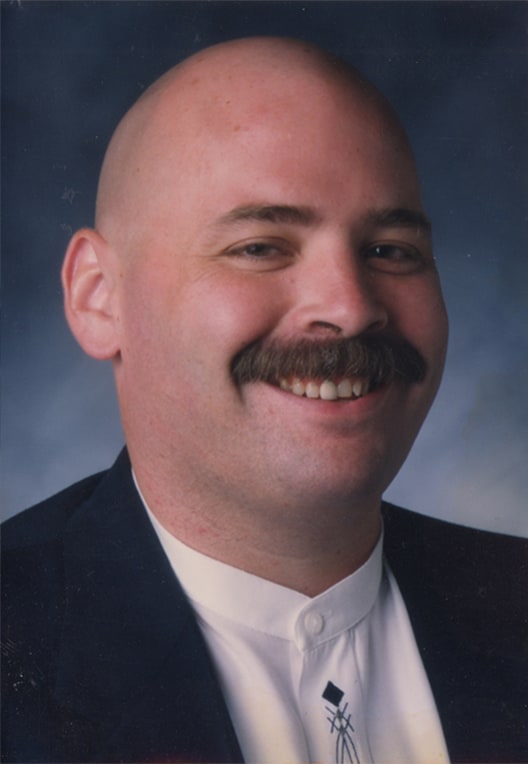 Trevor Bartholomew Lorenz was born on May 16, 1968 to proud parents Herbert and Delores Lorenz of Valley City, North Dakota. Trevor passed from this world after heroically fighting for his life with his family by his side on April 9, 2014.

"If love could have saved him, he would have lived forever.”

Trevor was the baby of his family, though by his stature alone you would never have guessed it. Trevor is preceded in death by his two oldest brothers, Kevin and Cordell Lorenz and his close friend Paul Mueller. Trevor was a loving and faithful husband to Jennifer Lorenz, a cherished son to Herbert and Delores Lorenz, and a beloved brother to Jeffrey Lorenz. Trevor was a proud uncle, and wanted to be known as, “Harsh Uncle Trevor” to his nieces and nephew, but the name never stuck. ☺ He was a loyal friend and treasured family member to many. Trevor was a devoted pet owner and will also be missed by his Bad Mr. Kitty.

In 1986, Trevor graduated from Casa Robles Fundamental High School in Orangevale, California. After a break from school, Trevor decided to attend Folsom Lake Community College where he proudly served as Student Body President and worked in the computer lab. It cannot be emphasized enough how much education meant to Trevor. In 1998, Trevor graduated from Folsom Lake College and received highest honors.

After graduation, Trevor was offered a contracted position at Intel in Folsom, California. He worked as a Network Engineer for the company and attained a Green Badge Security Clearance. After Trevor’s contract with Intel expired, he decided to go to work as a consultant for Mather Air Force Base.

In 2000, Trevor received his Bachelor’s degree from Sacramento State University. At the University he worked in the High Tech Center, serving students with disabilities. Trevor was later promoted to the position of Assistive Technology Specialist-ITC in the SSWD High Tech Center. Trevor taught students with disabilities how to use computers with adaptive technology to fit their individual needs, as well as serving as Network Engineer for the department. Trevor loved his job at Sac. State because it gave him the opportunity to really make a difference in people’s lives and he did so, every day.

In November of 2004, Trevor met the love of his life on Match.com. There was an instant connection between Trevor and Jennifer, they fell deeply in love and never looked back. “When my soul met yours it said, ‘Oh, there you are. I’ve been looking for you.’” Christmas morning of 2005 Trevor proposed. On September 23, 2006, Trevor and Jennifer were married at Jennifer’s childhood home in Wilton, California. It was a picturesque sunset ceremony.

In 2010 Trevor retired from Sacramento State University and enjoyed spending more quality time with his wife and family. He used some of his spare time to read and further educate himself. Trevor always said, “Your education is the one thing that nobody can ever take away from you.” Trevor enjoyed talking about politics, religion, and anything that could spark a fire in somebody. He enjoyed working with politicians and various organizations to fight for our second amendment rights. Trevor received many commendations thanking him for his contributions to the cause.

Trevor had many dreams in his life. Spaceflight was one that never changed. Since Trevor was very young he loved Star Trek, space, science fiction, flying, and technology. After high school Trevor wanted to join the air force and become a fighter pilot. At the time Trevor’s vision prevented him from attaining his dream. When Trevor learned about the Memorial Space Flight program, he knew his dream of going into space could someday become reality. Space will be “His Final Frontier.”

By his request, Trevor will have a special piece of him ☺ shot into space on one of the next space missions with Celestis Memorial Spaceflights. He will fly aboard an experimental NASA satellite, launched from Cape Canaveral, that will orbit Earth.

Trevor will be interred at the Fair Oaks Cemetery in a private ceremony at an undetermined future date. He will be joining his brothers Kevin and Cordell Lorenz who are already at rest there.

Ode To Trevor
by Jeff Lorenz

I was born to this world with two brothers before me. Our parents had rules, but we behaved poorly. We lived in a time and a place so far from here, we ran free until five, when dinner was near.

The thing I most needed was an ally you see, because with two older brothers it was them against me. I know God was listening, because along came our Trevor, and one thing was for sure, the game changed forever.

Together we formed this grand band of four, and we would pick on each other, which was mostly the norm, but if an outsider wronged one for sure. For we were musketeer, not just three, but all four.

Along with our aging our own interests grew, a musician, a drafter, a gamer, and finance I knew. We went our own ways, as young adults do. There were cars, jobs and ladies … well just a few.

The 90s brought with it great with promise for all. All by one brother, we didn’t expect him to fall. The four musketeers must now continue as three. An engineer, one in finance, and one in IT. Lord watch over our musician, he is important to me.

2000s brought chaos for the many and few. We met our new sister, a treasure we knew, but we lost one more brother, and the three became two. Just this guy who knows finance, and one in IT. Lord watch over our engineer, he is important to me.

These two musketeers grew closer than ever. We learned to sing “Love You” without turning redder. We still had separate interests; we didn’t talk every day, but the bond it grew stronger, till God took him away. Lord watch over our Trevor, he is important to me.

As the last musketeer I must carry on, to tell the stories and memories, but not make them too long. I thank God for this sister, who is so very strong. A musketeer lives inside her, of this I’m not wrong.

We stand here before you, shed no tears for you see, we know up in heaven there is not only three, a musician, engineer, and one in IT. For a carpenter guides them and Jesus makes four. Our prayers have been answered they are watched by the Lord.

And if our Trevor were here I know what he’d say, “Live long and prosper, and have a nice day.”

What A Piece Of Work Is Man

Hamlet:
What a piece of work is a man, how noble in reason, how infinite in faculties, in form and moving how express and admirable, in action how like an angel, in apprehension how like a god! The beauty of the world, the paragon of animals — and yet, to me, what is this quintessence of dust? Man delights not me — nor woman neither, though by your smiling you seem to say so.

(Trevor could recite this by heart)

One of Trevor's Favorite Quotes